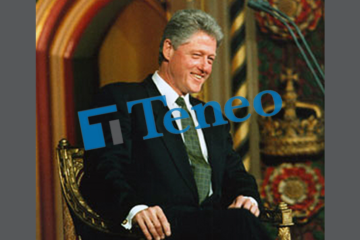 In emails published by WikiLeaks, Chelsea Clinton said Teneo’s involvement in the MF Global scandal was not the first time the firm had been a problem. New documents from a Freedom of Information Act request reveal clues about what went wrong in the rebuilding effort after the 2010 earthquake in Haiti. Either the US adopts a single-payer healthcare system or it accepts a brutal classist system. There is no third way. Clinton and her allies want to distance themselves from the 90s, or at least the more unpalatable parts of the era. Is There Any Attack On Donald Trump That Doesn’t Apply To Bill Clinton?

Every weapon the Clinton campaign cranks out with which to attack Donald Trump draws blood on both sides, and typically for the same reason—Bill Clinton. The Clintons And The ‘Cognitive Dissonance’ Election

Former President Bill Clinton went off on a rant against Black Lives Matter protesters in the audience at a campaign event for his wife, Hillary Clinton. There was focus on the spectacle itself. Some attention was paid to the substance of Clinton’s remarks, but for the most part, it was The Black Lives Matter activist confronted Clinton at a fundraiser over her past support for mass incarceration and use of the term “super predators.” The 1996 welfare reform law championed by the Clinton Administration known as the Personal Responsibility and Work Opportunity Reconciliation Act was supposed to bring in a new era and “end welfare as we know it.” In some sense it did, as the consequence of the law has been a considerable increase in extreme poverty in America.