Eight Alabama prisoners have followed in the footsteps of incarcerated activist Robert Earl Council by initiating a hunger strike, arguing they, like Council, were arbitrarily placed in solitary confinement.

Council, who has organized with other prisoners for years with the Free Alabama Movement, ended his hunger strike on March 14 after refusing food and liquids for one week. He was assured by Commissioner Jeffrey Dunn that he would be moved to general population.

According to Unheard Voices OTCJ, which is supporting these prisoners, they were part of a group of 30 men, who were awoken at 2:00 in the morning on February 28 and found they would be transferred hundreds of miles away to the Holman Correctional Facility.

At Holman, the Alabama Department of Corrections (ADOC) placed all 30 men in solitary confinement, 22 of whom came from general population at St. Clair and had not been notified of any disciplinary action or rules violations. The hunger strikers are from this group. The other eight came from isolation at St. Clair.

Unheard Voices received a statement from the hunger strikers announcing their action would begin at 12:01 AM on March 18 “in protest of being held in solitary without just cause.” They said their “loved ones and community members are mobilizing outside support, and more folks are expected to join the strike.”

The document was dated March 8 and explained the “reclassification” for “continued confinement in Restrictive Housing: Preventative Status without change to custody or security level”:

The eight men on hunger strike asked to be identified publicly in spite of the risk of retaliation for doing so. Their names are Kotoni Tellis, Marcus Lee, Mario Avila, Corey Burroughs, Earl Taylor 3rd, Tyree Cochran, Earl Manassa, and Joseph Torres.

ADOC Spokesperson Bob Horton told reporters that three of the hunger strikers ended their protest on the evening of March 18, a claim which advocates deny.

Unheard Voices called ADOC’s conduct “alarming” because some of the prisoners targeted by ADOC had associations with the Free Alabama Movement, a group that organizes prisoners to peacefully resist abuse and exploitation in Alabama’s prisons, and the Convicts Against Violence program, an education, conflict mediation, and leadership program credited with reducing prison violence until a notorious warden ended it years ago.

Over the past five years, Free Alabama Movement members have repeatedly pointed to the demise of the Convicts Against Violence program as an example of how the ADOC deliberately disrupts peacekeeping efforts by prisoners and encourages violent conditions in its facilities.

The Free Alabama Movement credits Convicts Against Violence as largely responsible for maintaining historic low levels of violence at the St. Clair Correctional Facility for years.

One member of the group, Bennu Hannibal Ra Sun, described the importance of the program’s conflict resolution and mediation classes to Shadowproof in 2016.

“We had peer leadership for gang members to teach them not to be leading guys down the wrong path,” Ra Sun said.

“We’re filling that time, creating new habits, creating new patterns, creating new thought processes, and so we’re making people more responsible, more mature,” Ra Sun said. “But if they don’t allow us to do that, then their time is filled with nothing. Whatever happens, they’re gonna jump in and get involved.”

Writings from the Free Alabama Movement argue that in its time, Convicts Against Violence was “the only program that offered any type of educational and mentoring classes in the dorms that house the majority of young black men.”

“The success of this program in stopping violence and educating these men cannot be disputed because ADOC’s own record prove that violence was down to all-time low levels, and class enrollment was over 98%.”

Everything changed in 2010, when Carter Davenport became warden at St. Clair. In 2012, Davenport received a two year suspension when he admitted to punching a handcuffed man in the face.

In 2014, prisoner Marquette F. Cummings, Jr. died after he was stabbed in the eye because, despite being medevaced to a hospital, Davenport “included an instruction with Cummings’ paperwork that “‘no heroic measures’ would be taken to save his life.”

As a result, hospital staff entered a do-not-resuscitate order. Davenport later ordered the hospital to take Cummings off life support.

Under Davenport’s watch, St. Clair experienced a 200 percent jump in homicides in just four years. Prisoners attribute much of that violence to Davenport ending Convicts Against Violence program, which was one of his first acts as warden.

Davenport’s termination of Convicts Against Violence impacted over 400 students. The Free Alabama Movement described it as “state-engineered violence.”

To fully appreciate the importance of losing such a program, one must understand the unrelentingly harsh and violent prison environment in which it existed, and in which it provided a meaningful outlet for anger and frustration.

In a lawsuit filed against ADOC in 2014, the Equal Justice Initiative (EJI) described St. Clair under Davenport as a place “where mismanagement, poor leadership, overcrowding, inadequate security, and unsafe conditions, including broken and non-functioning locks on the majority of cell doors, have lead to an extraordinarily high homicide rate, weekly stabbings and assaults, and a culture where violence is tolerated, creating conditions of confinement that violate the Eighth and Fourteenth Amendments to the United States Constitution.”

Pointing the blame directly at “poor management,” contraband freely entered the facility, often sold to prisoners by staff, who “fail to follow policies and procedures and sometimes ignore urgent pleas for assistance that then results in serious violence.”

EJI noted, “The lack of basic hygiene supplies and opportunities to engage in activities, including reading, create[d] an oppressive and monotonous environment that accommodate[d] abuse and violence, as well as drug abuse in a population with a high rate of mental illness and prior addiction.”

“New policies eliminating or severely cutting back mental health and drug treatment services, rehabilitative programming, and removing books and other constructive activities from the housing units” fueled violence as well.

Davenport was eventually transferred to Holman prison at the end of 2015, where two riots took place within 90 days. He retired after an incident in which he was stabbed.

In 2016, the Free Alabama Movement called for Convicts Against Violence to be reinstated, writing, “Robbing taxpayers to the tune of 1.5 billion dollars for building new prisons is not the answer to the problems that are plaguing Alabama’s prisons today.”

“When there is a culture of violence that [runs] this deep and for this long, the root of these problems have to be traced to the ever present factors, which then have to be removed. This starts at the top where policies and decisions are being made.”

“But crime pays and racism persists in Alabama, and when Black people start creating solutions to problems like illiteracy, violence, drug addictions, mentoring and leadership classes for misdirected gang members, conflict resolution and mediation, then these programs come under attack,” the Free Alabama Movement concluded.

Correction (3/20/19): An earlier version of this article stated ADOC “placed 22 of the men in general population and sent eight to solitary confinement without initiating any disciplinary action or notifying them about any rules violations.” In fact, ADOC sent 30 men to solitary confinement, 22 of whom had come from general population at St. Clair and received no justification for their isolation. The other eight came from isolation at St. Clair. Additionally, the article has been updated to clarify that the eight hunger strikers came from the group of 22 who went from St. Clair general population to Holman lock-up without justification. We regret the error. 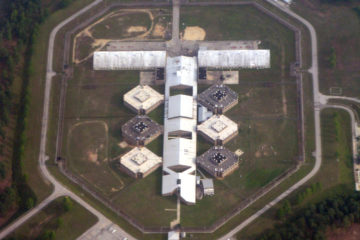