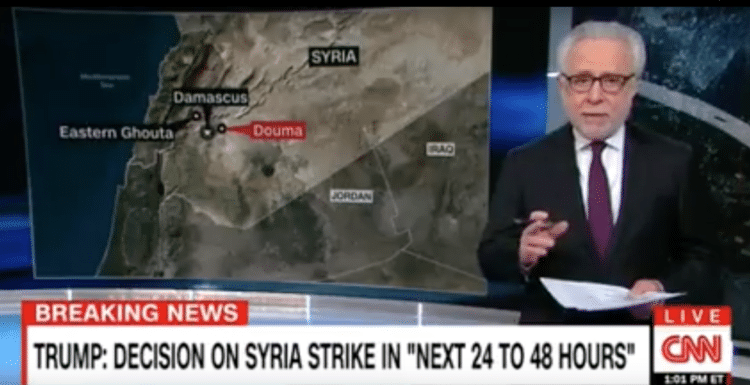 Credit: The Situation Room with Wolf Blitzer on CNN

An alleged chemical weapons attack against Syrians in Douma preserves United States military involvement in the conflict. It even creates the possibility for a major escalation in U.S. intervention, with President Donald Trump pledging to announce a response to the attack in 24 to 48 hours.

However, the sources for claims about the alleged attack come from pro-rebel groups, including those who have aligned themselves with Salafi-leaning militias like the hard-line Jaysh al-Islam (or the Army of Islam) backed by Saudi Arabia.

Jaysh al-Islam came to dominate Douma in October 2013. Yassin al-Haj Saleh, a Syrian exile who wrote an op-ed for the New York Times on the Syrian government’s siege of Ghouta, said the group established a “despotic system, arresting, kidnapping, and assassinating people who did not comply with its dictates.”

In 2015, the militia locked dozens of captured army officers, who were from President Bashar al-Assad’s Alawite sect, in cages on rooftops and the streets of Douma. They were effectively used in the stunt as human shields to deter Syria government or Russian attacks.

There has been no independent confirmation that the Syrian government was responsible for the alleged attack. Media outlets, like CNN and NBC News, indicated they could not verify the claims. Yet, there is very little room for skepticism or tempered judgment in Western media reports

The expressions of skepticism are virtually all from Syrian government or Russian government officials. Even if these remarks included in news reports seem like they should be weighed against claims, to put forward this view invites immediate condemnation for “apologism” over Assad’s brutality or promoting the agenda of the Kremlin.

U.S. media largely have no desire to assess whether it is true or not that Assad used chemical weapons.

Former national security adviser for President Barack Obama, Tom Donilon, appeared on CNN. He said Trump should quickly establish evidence the Syria government was behind the attack. “It needs to be clear evidence,” he added.

Donilon was interrupted by host Wolf Blitzer, who said “we’ve seen the video of the children.” To which Donilon assured Blitzer he had no doubt that the Syrian government was responsible.

“I think the evidence is pretty persuasive at this point, but establish that solidly. You had 500 people, who sought medical assistance as a result of this attack. It’s consistent with past Syrian actions to try and clear out these areas right around Damascus. Only 10 miles from Damascus,” Donilon asserted.

If the media and government officials have all made up their mind that some kind of action must be taken before compiling evidence, it does not matter what is compiled. The evidence pieced together will be put together to justify an outcome already favored by the Western world, particularly as a way to counter the hegemonic influence of Russia, or to a lesser extent, Iran. (Israel already allegedly launched a strike on a Syrian air base used by Iranian troops.)

It is nearly impossible to find independent reliable sources on what is unfolding in the Syrian war.

Government officials have an incentive, as all governments do, to lie about the nature of operations. So, too, do militia groups fighting the Syrian government have an incentive to control the narrative and ensure it is what they want the world to see, hear, and read, especially as the need for assistance from outside military forces increases sharply.

According to the New York Times, “It [is] not possible to independently verify the reports because Douma is surrounded by Syrian government forces, which prevent access by journalists, aid workers and investigators.”

That could also be true for areas in and around Eastern Ghouta that are controlled by Jaysh al-Islam. Any journalists, aid workers, or investigators questioning what activists are saying to media could be seen as a threat that needed to be expelled.

Still, it is important to at least attempt to examine the alleged chemical weapons attack and whether there is any concrete evidence beyond strongly held assumptions toward Assad and Russia to prove Syrian government forces were responsible.

Mahmoud Aadam is the spokesman for the White Helmets (or Syrian Civil Defense). The New York Times reported that Aadam said in a video on Facebook “15 people, including women and children, reported breathing problems after an airstrike in their area.” This happened Saturday afternoon.

“Then, after dark, a government helicopter dropped exploding barrels that dispersed an unknown chemical substance that affected many more people, Mr. Aadam said. The continued assaults made it hard for rescue workers to look for victims, he said, meaning that it was difficult to establish a comprehensive death toll.”

The AP also spoke to Bilal Abou Salah, who claimed “a large, yellow cylinder smashed through the roof of an apartment building and came to rest on the third floor and started to discharge gas.” He was labeled an activist and no other information about his affiliation with any organizations or militias included.

NBC News’ report contained vague details about what allegedly happened, with more specifics about the dead and wounded attributed to the White Helmets and “local activists,” whoever they may be.

Similarly, CNN reported, “Anti-government activists claimed Syrian military helicopters dropped barrel bombs filled with chemicals on the town, suffocating some residents and sending others into violent convulsions.” It is unclear if these activists are with the White Helmets or some other group.

A report from the Independent, based in the United Kingdom, contained much more severe allegations. “The pro-opposition Ghouta Media Center alleged that a helicopter had dropped a barrel bomb containing sarin, and another organization claimed that a hospital had been hit by a chlorine bomb.”

The Ghouta Media Center is a citizen journalism collective composed of individuals who are all “against the Syrian regime” and “work without conditions or restrictions.” They say they approach their work with “objectivity and professionalism in a manner that serves the revolution.”

One problem, however, is that this collective must deal with the power Salafi-leaning militias or jihadist rebel groups have in the opposition. The condition they work under is not putting out reporting that will get them killed. Such militias have an incentive to embellish or exaggerate reports of chemical weapons as they are deployed.

The White Helmets have gone to great lengths to make it seem they are a nonviolent group of rescuers, but they are strong advocates of regime change.

As journalist Max Blumenthal documented, photographs and videos have shown members of the White Helmets “boasting about discarding the body parts of Syrian troops in dumpsters, posing triumphantly on the corpses of Syrian soldiers, joining fighters accosting an alleged political opponent, waving the flag of al-Qaida affiliate Jabhat al-Nusra alongside jihadist fighters, and carrying weapons.” And in one instance, White Helmet members participated in an execution carried out by a member of al-Nusra.

Does any of this mean the White Helmets are fabricating or lying to the press about an alleged chemical weapons attack? There is no specific evidence at the moment, but it would not be the first time if this turned out to be the case.

Journalist Gareth Porter detailed in March 2017 how an account of an attack by a White Helmets chief on a “humanitarian aid convoy west of Aleppo City on September 19, 2016,” was entirely flawed.

At first, [Ammar al-Selmo] claimed in an interview that he had been more than a kilometer away from the warehouses where the attack occurred and had seen Syrian helicopters dropping “barrel bombs” on the site. But his eyewitness account would have been impossible because it was already dark by the time he said the attack began at about 7:15 p.m. He changed his story in a later interview, claiming that he had been right across the street at the moment of the attack and had heard the “barrel bombs” being dropped rather than seeing them.

Selmo insisted in a video filmed that night that the attack began with Syrian helicopters dropping eight “barrel bombs,” which are described as large, crudely constructed bombs weighing from 250 kg to 500 kg or even more. Citing a box-shaped indentation in the rubble, Selmo said the video is showing “the box of the barrel bomb,” but the indentation is far too small to be a crater from such a bomb.

But Hussein Badawi, apparently the White Helmet official in charge of the Urum al Kubrah area, contradicted Selmo’s story. In a separate interview, Badawi said the attack had begun not with “barrel bombs” but with “four consecutive rockets” that he said had been launched by government forces from their defense plant in Aleppo province – meaning that it was a ground-launched attack rather than an air attack.

In an email response to a query from me, Selmo retracted his own original claim about the S-5 rockets. “[B]efore aircraft’s attack on the area,” he wrote, “many land to land missiles attacked the place coming from the defense factories which [are] located in eastern Aleppo [east of] the city, regime controlled area. [T]hen aircraft came and attacked the place.”…

Nevertheless, the White Helmet chief’s “dramatic narrative of a Russian-Syria air attack” formed the basis of a United Nation panel’s report on the attack.

The Syrian Observatory for Human Rights may be capable of accurately tracking casualty counts in the war, but it is a one-man operation. Rami Abdul Rahman, who fled Syria over 13 years ago, conducts work from within the United Kingdom. His organization concedes it cannot be certain about chemicals allegedly reported to have been deployed in Douma.

Over the last months, Syrian forces greatly intensified their campaign to regain control of the area of Eastern Ghouta, which includes Douma.

Haitham Bakkar told the AP in March it was “very tense because it is unclear what will happen next. He said it was a question of existence for the Army of Islam fighters, most of whom are from Douma.”

“If the Army of Islam goes to northern Syria it will be its end,” Bakkar declared.

As AP reported, “Douma, on the northeastern edge of Damascus,” was “the last rebel holdout in the eastern Ghouta region after thousands of fighters from the Ahrar al-Sham and Faylaq al-Rahman groups ceded their towns to government control under a deal brokered by Russia, a key ally of Assad.” (Ahrar al-Sham is a Salafi organization and Faylaq al-Rahman is an ultraconservative religious group.)

While this pressure from Syria and Russian officials to leave eastern Ghouta increased, days later, President Donald Trump signaled it was time for the U.S. military to prepare for withdrawal from Syria.  “I want to get out. I want to bring our troops back home.”

“One of our commanders has unlawfully used a type of weapon that is not included in our list,” a statement posted on the group’s Twitter account read.

The Islamist group didn’t say what type of weapon was used but it said the commander has been referred to an internal martial court.

Notably, none of the media reports contain comments from Jaysh al-Islam on what transpired in the past few days. But if Western media had any interest in sorting out the truth of what unfolded in the last week, they would ask leaders of Jaysh al-Islam if they possessed chemical weapons and used them to drum up sympathy for their dire situation.