A nonprofit legal advocacy organization has documented and responded to nearly 300 incidents of censorship, punishment, and other actions intended to “burden” advocacy for Palestinian human rights. The incidents point to a pervasive problem on American campuses, which is chilling the rights of individuals to engage in free speech.

The incidents are largely a result of pressure from defenders of Israel to the increased success of the boycott, divestment, and sanctions (BDS) movement against Israeli military occupation.

Palestine Legal, which was founded in 2012 to support the rights of Americans to speak out for Palestinian freedom, and the Center for Constitutional Rights (CCR) put together a “first of its kind” report focusing on the suppression of speech, expression, and activism over the past two years.

“The overwhelming majority of these incidents—89 percent in 2014 and 80 percent in the first half of 2015—targeted students and scholars, a reaction to the increasingly central role universities play in the movement for Palestinian rights,” noted Palestine Legal.

Nearly a third of incidents in the first six months of 2015 stemmed from “false accusations of support for terrorism.” This was an increase, as only 13 percent of incidents in 2014 suggested Palestinian advocates supported terrorism. “The claim that Palestine activists support terrorism frequently relies on anti-Muslim and xenophobic stereotypes about the inherent violence and hateful worldviews of Arab, Muslim, and international students,” the report states.

Most importantly, the accusations are “baseless,” because “no links between terrorism and student activism for Palestinian rights have been substantiated.”

Dima Khalidi, the director for Palestine Legal, noted the organization had interviewed hundreds of students, professors, administrators, and others. Eighty-five percent of the incidents took place on 65 college and university campuses and in 24 different states.

“We’re not just talking about a handful of isolated incidents,” Khalidi declared. “This is really a widespread problem that affects hundreds of people across the country.”

A “primary tool” for pro-Israel groups is vilification

As the report acknowledges, “The speech activities of Palestinian-American, Arab-American, and Muslim students routinely subject them to heightened harassment, intimidation, and discriminatory treatment in the midst of a post-9/11 climate in which their communities already face infringements of their civil liberties.”

Vilification is a “primary tool” for pro-Israel groups. One student falsely accused of associating with terrorists suggested, “The underlying message [is] that if you speak out too loudly or work too hard … anti-Palestinian activist[s] will smear you just like [they] tried to smear me.”

These accusations of anti-Semitism and support for terrorism coerce campus administrators into restricting and punishing students or scholars for their speech.

In January 2015, as the report highlights, “The Reut Institute reportedly held a ‘hackathon,’ in which Israeli officials and a number of other Israeli advocacy groups participated, aimed at exploring ways to gather intelligence on and target individuals involved in Palestine solidarity work. In its June 2015 strategy document, the Reut Institute highlighted the need to ‘out-name-shame the delegitimizers’ as a strategy to fight BDS, recommending the use of ‘all available firepower—financial, social, legal, etc.'” 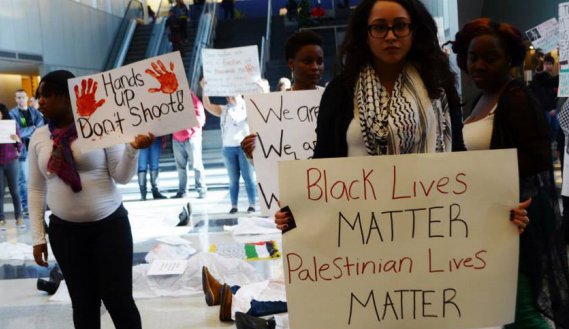 A shady outfit called Canary Mission put out a “list of organizations and activists it accused of supporting terrorism, including campus chapters of the Muslim Student Association, which it refers to as a ‘virtual terror factory.”

The list was published for the express McCarthyist purpose of “exposing” individuals and student groups to make it harder for them to obtain positions in school and earn jobs after graduation.

Students have reported being spied upon by Israeli consulate officials. For example, in 2014, students reported members of the Israeli consul general’s entourage “photographed pro-divestment student campaigners as they spoke with other students and leafleted.”

The surveillance was part of acts to disrupt a divestment vote on campus. Students with family and friends in occupied Palestine expressed concern “such surveillance could have serious consequences” as it might allow Israel to block them from entering Israel and the West Bank to visit family.

“All of these tactics—individually and in the aggregate—threaten the First Amendment rights of people who seek to raise awareness about Palestinian human rights and challenge the dominant perspective in this country, which discounts Israel’s discriminatory and violent government policies,” the report asserts.

The report details several examples of instances when these tactics were wielded to disrupt and stifle actions.

In February 2015, DePaul University’s Students for Justice in Palestine chapter sought to hold a fundraising event for Rasmea Odeh, a Palestinian American organizer who was tortured by Israeli forces into confessing that she played a role in a 1967 bombing. The United States government prosecuted her for lying about her past history in immigration documents.

DePaul administrators imposed security fees on the SJP because of a “planned counter-protest,” which led administrators to determine they might need the protection. Four security guards were detailed, and SJP was billed $480. After being forced to subsidize risk from threatened opposition, SJP could not afford to pay the bill and lost the privilege to reserve space for events on campus.

On October 8, 2014, John Jay College instructed the SJP chapter not to “use sheet covered in red paint (representing blood),” as they did during their “Die In/Vigil from Ferguson to Gaza” action. The instruction was a response to pro-Israeli students, who claimed they “felt uncomfortable with the message.”

University of Illinois Urbana-Champaign violated Professor Steven Salaita’s academic freedom when they terminated him in 2014 over tweets he sent reacting to Israel’s assault on Gaza.

At Montclair State University, the student government initially sanctioned the university’s SJP for handing out “offensive” pamphlets. The literature led SGA to “fine the group five percent of its fall semester budget” and an order to cease distribution of all “political propaganda.” The brochure focused on Israeli settlements and the loss of Palestinian land from 1946 to 2000. In April 2013, Northeastern University placed SJP members on “probation” after they walked out of a campus event featuring a soldier from the Israeli Defense Forces (IDF). Offficials warned the students before the event not to hold signs or engage in “vocal disruption.”

“Students decided to tape the names of Palestinian children killed by the IDF to their shirts and planned a walkout,” the report notes. “During a pause in the presentation, one SJP student stood up and stated, ‘The IDF are war criminals and they are not welcome on our campus,” then proceeded to walk out with other students, who spontaneously chanted ‘Free Palestine’ as they left the room.”

Students were investigated by university administrators, and the university canceled a lecture the SJP had planned with Dr. Abu Sitta. The students were later charged with violations of school codes, and after a hearing, SJP was found to have violated “demonstration policy.” They were on probation until December 2013 and forced to write a “civility statement.”

In November 2010, Rutgers University administrators refused to allow students, who raised money for the Gaza Flotilla, to disburse those funds after Hillel alleged the fundraising constituted “material support for terrorism.”

Rather stunningly, University of California President Mark Yudof issued a rare public statement in February 2012 after activists disrupted an event, which compared Palestinian rights activism to incidents of racism. He likened the “hecklers” to the “hanging of nooses” on black students’ dorm doors or putting “swastikas on Jewish students’ property. He pledged to get the Anti-Defamation League (ADL) and the Simon Wiesenthal Center’s Museum of Tolerance involved to “improve campus climate for all students.”

In the spring semester of 2015, the University of Toledo student government caved to Israeli advocacy groups and blocked the public from attending a divestment hearing, a violation of the Open Meetings Act in Ohio. Attendance by SJP members was restricted, as they were forced to sit in a “separate room” away from Hillel students. Student senators were blocked from voting on the resolution. But outcry eventually led to the resolution coming up for a vote and it passed “overwhelmingly.”

One of the more stunning examples involves eleven University of California-Irvine students, who were criminally prosecuted in 2010 for walking out of a speech by then-Israeli ambassador to the U.S., Michael Oren. They were charged with misdemeanors for disrupting a public meeting, and the jury found ten of the students guilty.

The numbers do not necessarily tell the full story of how organizing is being suppressed. These are only incidents, which were reported to Palestine Legal so the organization could provide assistance.

“They’re really only the tip of the iceberg with a lot more incidents that go unreported,” Khalidi added.

However, the report clearly demonstrates how heavy-handed tactics are being used to intimidate Palestinian human rights activists and chill their criticism of Israeli policies against Palestinians.