Nearing end of second term, Obama administration maintains it has waged warfare legally irrespective of the toll it has taken on numerous countries 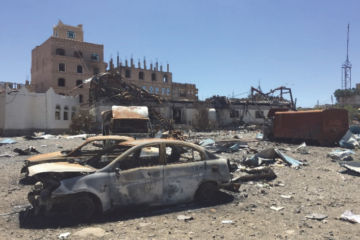 The United States shipped hundreds of millions of dollars in weapons to Saudi Arabia just weeks prior to the Saudi-led coalition’s funeral bombing in Sanaa, Yemen, according to a new analysis of U.S. government data conducted by Shadowproof. The October 8 bombing killed 140 and wounded over 500. It was The proposal would establish a policy on what constitutes free speech and prohibits not only disruptions against people, but at the 24 CUNY campuses as well. After all, how distressing can the financial establishment be to those unaffected by its destruction? Jared Chase is the last member of the “NATO 3” in prison. He suffers from Huntington’s disease and faces more charges for allegedly assaulting a guard.