The Saint Louis County Department of Public Health (DPH) is considering privatizing medical services for over one thousand inmates at the Buzz Westfall Justice Center and the Family Court Juvenile Detention Center in Clayton, Missouri.

The Request for Proposals (RFP) [PDF], dated July 2015, calls for an initial two year agreement beginning January 1, 2016, with the opportunity to extend for three years after completion and review. Proposals were due on September 4.

And if the county goes through with it, there’s a good chance Dr. Rottnek’s concerns will be proven valid. St. Louis County may be setting itself up for proposals which, if accepted, could institutionalize abuse and mistreatment as has happened to other jail systems that have privatized medical care.

Like other jail medical RFP’s, St. Louis county is looking for proposals in which the contractor will be responsible for absorbing “all costs” associated with operating inside the facilities.

For Buzz Westfall, proposals must provide “staffing necessary for a facility open 24 hours a day, 7 days per week.” The contractor must provide, and is financially responsible for, intake assessments, preventative health services, “access to specialty services” and “hospital care,” emergency services and transport, pharmaceutical services, suicide prevention and all medical supplies and lab services.

For the Family Court, the only staffing specification is that nurses be available Monday through Friday, 7am to 3:30 pm. The contractor must provide pediatric psychiatry, physician and lab services, all medical supplies and stock medication as well as preventative health services and testing.

Proposals must include full indemnification of the county and its officials, employees or volunteers “from and against all liability for damage arising from injuries to persons or damage to property” caused by the contractor or its subcontractors and employees. The contractor must also provide “Certificate of Insurance evidencing that each employee of contractor performing services under this contract is covered by professional liability limits of not less than one million dollars per occurrence and three million dollars in aggregate.” All personnel must be considered employees of the contractor and not civil service employees.

The county is looking to save money by privatizing, so it’s no surprise they would want to offload all of the expenses and legal liability onto the contractor, who will ostensibly submit a contract bid for an amount less than what the county has been paying to provide health care to inmates on its own. But in doing so, the county runs a substantial risk of having those services suppressed in order to make the contract profitable for the contractor.

Critical needs such as emergency room transport, outside treatments and pharmaceutical services, are not only incredibly expensive, but also provided at the sole discretion of the contractor. In many cases, contractors have made money for themselves while “saving” money for the county by refusing certain medications behind bars or denying transport to an emergency room or outside specialist until the individual is either near death (at which point they can be released on their own recognizance, absolving the jail of the inmates’ medical costs), or dead.

The indemnification standard could also create an obstacle to accountability by absolving the government of any responsibility for the conduct of its contractor. It may make it more difficult for an inmate who has been abused or medically neglected to pursue damages in a civil rights complaint, instead forcing them to claim medical malpractice.

According to reporting by Benjamin Foldy for Shadowproof, “The distinction is important. Malpractice law varies across states, but almost all states have instituted various caps on damages in malpractice cases. Further complicating matters is sovereign immunity, a legal concept through which governments and municipalities often limit the circumstances in which they can be sued or place specific caps on their financial liability.”

Both Buzz Westfall and the Family Court detention centers are currently accredited facilities — the former, by the ACA, the latter by the NCCHC. The RFP requires the contractor to maintain those accreditations throughout the life of the contract.

But outside of complying with their standards, there are virtually no baseline requirements for the number of staff, or the amount of time they must spend tending to inmate medical needs. There is also nothing in the RFP that would prohibit the use of formularies, which some contractors have been alleged to use to limit the prescriptions available to inmates. These are major issues in privatized jail healthcare that should be addressed up front.

ACA and NCCHC standards are widely followed in corrections departments. But while the RFP lets the ACA and NCCHC do a lot of the heavy lifting in terms of describing the specific standards and requirements, it’s important to note that accreditation is not exactly bulletproof.

In Ohio, for example, Corrections Corporation of America came under fire for understaffing the Lake Eerie Correctional Facility, which led to increased violence in the facility. ACA gave the facility a score of 99%.

Similarly, regarding the NCCHC, a judge-ordered assessment of health care at one prison in Idaho revealed abhorrent conditions, but Corizon dismissed the criticism and claimed the NCCHC gave them high marks. This might be because “special masters for the courts are usually asked to focus almost exclusively on clinical care and the medical outcome for patients. Reviews by NCCHC, meanwhile, typically have a greater emphasis on the structural elements that an organization needs to deliver good health care.”

It’s also worth noting that associations like the ACA basically sell accreditation services for thousands of dollars a pop, and have been accused of waiving certain requirements at will. Indeed, the objectivity and standards of correctional associations has been the subject of scrutiny and criticism in recent months. If you’re curious about what those standards are exactly, you can purchase them from ACA directly, because they’re not available online or distributed freely.

Bidding on inmate healthcare is symbolic

According to St. Louis Public Radio, Corizon Health Services will likely bid on the contract as it’s the nation’s largest provider of inmate medical services. Advanced Correctional Healthcare may potentially bid as well, considering they are a major player in Missouri, serving 40 county jails.

But we’re not just talking about a contract to provide health services. The story is much more complicated than that. Underlying all of this is the disparate racial make-up of jail populations, especially in St Louis. Within those populations, the need for medical and mental health treatment is significantly higher among people of color than others — and at a much higher prevalence rate than the general population.

For many people, jail healthcare can be one of their first or few opportunities to see a doctor and receive a diagnosis or treatment. That’s because many of the communities from which inmates come are poor and underserved, lacking access to basic healthcare and education. Based on the prior records of companies likely to bid on this RFP, those few opportunities for healthcare could be sacrificed in the name of “savings,” and conditions in those jails could deteriorate dramatically.

Buzz Westfall is a symbolic location for this conversation. The “justice center” is where many Ferguson demonstrators were detained, and the grand jury announcement about the investigation of Michael Brown’s death took place on its front steps.

These are, after all, some of the very institutions that Black Lives Matters protesters are aiming at because of the negative impact they have on their communities. If St. Louis decides to privatize jail medicine in order to save money, it’s unlikely it will be received as a meaningless business decision by the community — and rightfully so. 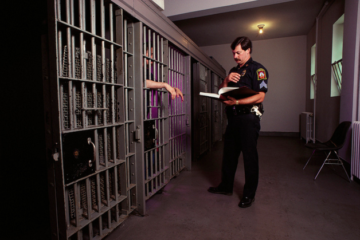