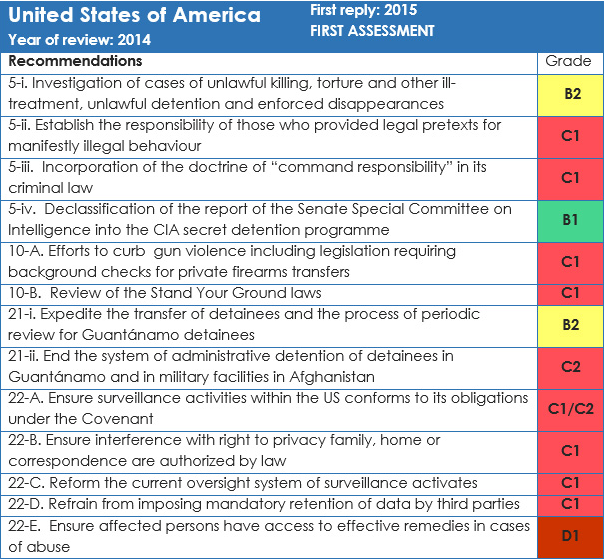 A United Nations committee, which reviews how countries comply with the International Covenant on Civil and Political Rights (ICCPR), issued grades for the United States government’s implementation of recommendations issued last year. The committee gave the US low grades for surveillance and detention of prisoners at Guantanamo Bay and in facilities in Afghanistan.

The ICCPR is an international human rights treaty. Signatories are supposed to undertake measures to ensure the rights in the treaty are protected in their countries. In fact, since the US ratified the treaty in 1992, the government has an obligation to comply with the treaty as it would any other domestic law.

Countries, which are signatories, report to the committee every four years. This is the fourth periodic review of the US.

The US did not receive any “A” grades. It received a high “B1” grade for declassifying part of the report of the Senate Special Committee on Intelligence into the CIA’s detention and torture of detainees and a lower “B2” grade for investigating cases of unlawful killing, torture and other ill-treatment, unlawful detention, and enforced disappearances, and expediting the release of detainees from Guantanamo Bay.

The committee issued a “C2” grade for the continued detention of detainees at Guantanamo and in facilities in Afghanistan.

In regards to surveillance, it gave the US a “C1” grade for ensuring surveillance complies with the treaty, ensuring “interference with right to privacy, family, home, or correspondence” is authorized by law, reforming oversight of surveillance, and refraining from imposing “mandatory retention” of data on “third parties.”

The worst grade given was a “D1” for failing to ensure persons are able to obtain remedies if they are the victims of surveillance abuse.

It was disappointing to the committee that the “doctrine of command responsibility” had not been incorporated into criminal law yet, meaning persons in positions of command may be subject to prosecution if they create the environment for unlawful killings, torture, abuse, and other cruel and inhuman treatment.

As stated in the committee’s review of the US in 2014 [PDF], the committee was concerned about the NSA’s bulk phone metadata surveillance program under the Patriot Act and surveillance under the FISA Amendments Act, including surveillance “through PRISM (collection of communications content from United States-based Internet companies) and UPSTREAM (collection of communications metadata and content by tapping fiber-optic cables carrying Internet traffic) and the adverse impact on individuals’ right to privacy.” It opposed the body of rulings being kept secret by the Foreign Surveillance Court, which prevented people from knowing the law.

Particularly, the committee criticized the lack of safeguards for non-US citizens to be protected from “excessive surveillance.” It pointed out there is no access to remedies if they are abused.

While the USA Freedom Act was signed into law, it did not end the kind of mass surveillance, which violates or explicitly undermines rights in the treaty. Bulk data collection by telecommunications companies continues, and there will continue to be a body of secret law related to surveillance. The NSA continues to be permitted to spy on international phone calls and engage in dragnet surveillance of communications by foreign populations.

Within all the efforts for reform, President Barack Obama’s administration and Congress endorsed no measures to ensure citizens or people targeted by surveillance could have their day in court.

Detainees in Afghanistan and Guantanamo Bay remain in prison cells without charge or trial. There is no plan to abandon the dysfunctional and second-class legal system known as military commissions. Not only do those detainees lack rights to a fair trial, but they continue to endure torture and abuse as the political class in America ignores the fact that most never committed any crimes against the United States.