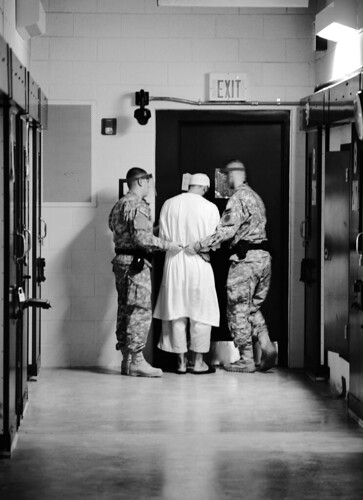 Despite a decision to not pursue charges, the Department of Defense has threatened to revoke the security clearance of a Navy nurse, who refused to force-feed prisoners at Guantanamo Bay.

Physicians for Human Rights condemned this news and called it “backdoor retaliation for his refusal to force-feed Guantánamo detainees on hunger strike.” The advocacy organization also noted that the nurse was recently given an ethics award by the American Nurses Association (ANA).

“The military’s latest action against the nurse is backdoor retaliation for refusing to take part in an unethical and criminal activity,” said Dr. Vincent Iacopino, PHR’s medical director. “Even as we speak, the American Nurses Association is honoring him with an ethics award for refusing to force-feed detainees. It is extraordinary that the military would punish the nurse for conduct that his profession recognizes as exemplary ethical behavior.”

In May, the Defense Department declined to push for the discharge of the nurse, who has yet to be identified. However, it was unclear when the Defense Department made this decision whether records related to his act of resistance would at some point be used against him by promotion boards or in security clearance reviews.

The nurse was not permitted to perform medical duties while he faced potential prosecution. He was assigned to “inconsequential administrative tasks,” according to his lawyer, Ron Meister.

ANA defended the nurse in a letter to Secretary of Defense Chuck Hagel in October of last year.

“The ANA Code of Ethics for Nurses clearly supports the ethical right of a professional nurse to make an independent judgment about whether he or she should participate in this or any other such activity,” the ANA declared. “This right must be protected and exercised without concern for retaliation.”
country.”

A nurse’s primary commitment must be to the patient, and that means “acting to minimize or eliminate unwarranted, unwanted, or unnecessary medical treatment and patient suffering.” That is what the nurse did in this case.

The American Medical Association (AMA), which also has supported the nurse, condemned the Defense Department’s force-feeding of prisoners as a violation of “core ethical values of medicine” in a December letter [PDF].

The nurse is someone, who has been in the Navy for 18 years, and sought to uphold ethical practices. He is the only known example of a conscientious objector to force-feeding of Guantanamo prisoners, which has been tortuously employed by military personnel.

If the nurse loses his security clearance, it could mean a potential discharged or even a loss of benefits. He may be severely limited in his ability to return to a job if he cannot work in a position considered to be “sensitive” by the Defense Department.

Revoking a government employee’s security clearance is a known tactic for silencing whistleblowers.

Removal from Guantanamo Bay and placement under investigation was punishment enough. It sent a message to other medical officers not to challenge the Pentagon over its unethical treatment of prisoners.

Unfortunately, the Defense Department finds it must protect itself from this nurse by revoking his security clearance because, if he is in any situation that may force him to fall back on his ethics, they know he will be on the side of the patient and not the Pentagon.

Correction, apology and reaffirmation of my conclusion re Sandra Bland's arrest