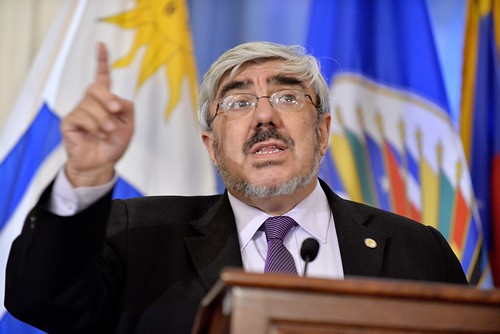 Uruguay’s National Drug Board released a report to the High Commissioner of Human Rights of the United Nations on shifting drug policy toward a human rights perspective.

The initiative [PDF], proposed on the International Day Against Drug Abuse and Illicit Trafficking, consists of 10 guidelines. One point decriminalizes drug use and ends the death penalty for it. Another point emphasizes respect for different cultures and plans to reduce drug use.

The report found the current approach violating rights of citizens, and a new way of thinking was needed:

The rights of life, liberty and personal security have been violated by [current] drug policy.  Government intervention threatens fundamental rights like when prohibition produces—an unintended effect—powerful and violent illegal markets that threaten the a person’s and community’s security without the state adopting effective protection measures.

Juan Andres Roballo, head of the National Drug Board, stressed the importance of patience in regards to overall drug policy:

We are aware that we cannot obtain automatic, immediate results, but, with a firm and sustained policy, in time we are sure we will have effective results.

Uruguay, as noted by officials associated with the board, is an interesting case. The country legalized cannabis in 2013. When Uruguay passed the measure, it was viewed as a bold move as no other nation fully decided to legalize cannabis.

Roballo noted how such a policy could be helpful in pushing for such a change in drug policy:

[We need to] maintain this status on the national and international level to provide a consist outline in this discussion and the actions of the state directly affect our community and world population.

Milton Romani, secretary-general of the National Drug Board, said it was important to “respect the diversity of approach” in regards to drug policy:

We need to look for paths where there is inclusive consensus, not exclusive. Why refuse to include good practices and models like reduction of harm?

A resolution deriving from the 10 guidelines is scheduled for a vote at next year’s UN General Assembly meeting.