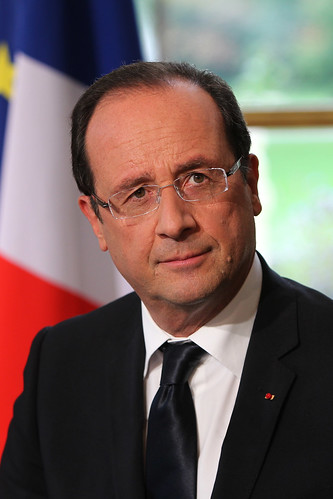 Top secret intelligence reports and technical documents from the National Security Agency showing the agency has spied upon the communications of France’s past three presidents were published on June 23.

Julian Assange, the media organization’s founder, described the “Espionnage Élysée” as evidence that France’s elected government has been “subject to hostile surveillance” by a “hostile ally.” French people have a “right to know” this information.

The documents indicate high-ranking officials targeted the communications of Jacques Chirac, who was president from 1995 to 2007, Nicolas Sarkozy, who was 2007-2012, and Francois Hollande, who has been president since 2012. French cabinet ministers and diplomats in those successive governments have been targeted as well.

WikiLeaks also published “intelligence summaries of conversations” between French government officials, which offer a glimpse of the kind of political and economic intelligence the US government is interested in tracking.

In May 2012, the NSA spied on secret meetings Hollande had in Paris to discuss the “eurozone crisis, particularly the consequences of a Greek exit.” The NSA believed Hollande did not want word of meetings to get out because he feared it would “deepen the crisis.” French officials met with German Social Democratic Party, part of the German opposition, and Hollande did not want German Chancellor Angela Merkel to find out and cause “diplomatic problems.” (*Note: It is possible the NSA was spying on talks between Merkel and Hollande in Berlin prior to these secret meetings.)

One summary of intercepted communications between a French ambassador in Washington, Pierre Vimont, and a diplomatic advisor to Sarkozy, Jean-David Levitte, from March 24, 2010, shows French government officials were upset that the US wanted to “continue spying on France.” France and the US were trying to work out a “bilateral intelligence cooperation agreement” but US officials had backed away, not wanting to agree to not spy on French officials.

Other summaries WikiLeaks published involve Chirac’s discussion of United Nations appointments, Sarkozy’s potential plans for Israel and Palestinians, and how France planned to show “leadership” during the financial crisis in 2008.

The summary reads, “The President blamed many of the current economic problems on mistakes made by the US government, but believes that Washington is now heeding some of his advice. In his view, this is the first time that the US has not taken the lead in managing a global crisis and France will now take the helm.”

A backlash in France was immediate, with France summoning the US ambassador to France Jane Hartley to respond to the revelations. Hollande described the spying as “unacceptable” and held two emergency meetings with top security officials and lawmakers (many who had just voted for legislation that gives the French government new spying powers). And Hollande sent France’s “top intelligence coordinator” to ensure that the US government is keeping a promise made on surveillance after documents from NSA whistleblower Edward Snowden were published in 2013 and 2014.

In October 2013, it was revealed that the NSA had conducted extensive spying operations against French citizens, scooping up “70 million digital communications inside France in a single month from December 10, 2012, to January 8, 2013.” That, too, was deemed to be “unacceptable.”

Previously, the US government faced a scandal over spying on German officials, particularly Merkel’s cellphone. German intelligence uncovered a spy providing documents to the CIA on a special parliamentary committee investigating the extent of NSA surveillance against Germany.  The CIA chief in Germany was expelled.

Initially, President Barack Obama denied the NSA had spied on Merkel’s cellphone. In January 2014, Obama stated he did not want to harm diplomatic relations with “surveillance mechanisms that somehow would impede the kind of communication and trust that we have.”

“What I can say is as long as I am president of the United States, the chancellor of Germany will not have to worry about this,” Obama declared. But Obama also defended the US intelligence and military apparatus that has capabilities used to target all sorts of communications among and between the populations of European countries.

Prior to these remarks by the president, Obama’s appointed NSA Review Group recommended:

…In making judgments about whether to engage in surveillance of foreign leaders, we suggest that these questions should be considered: (1) Is there a need to engage in such surveillance in order to assess significant threats to our national security? (2) Is the other nation one with whom we share values and interests, with whom we have a cooperative relationship, and whose leaders we should accord a high degree of respect and deference? (3) Is there a reason to believe the foreign leader may be being duplicitous in dealing with senior US officials or is attempting to hide information relevant to national security concerns from the US? (4) Are there other collection means or collection targets that could reliably reveal the needed information? (5) What would be the negative effects if the leader became aware of the US collection, or if citizens of the relevant nation became so aware? These questions can helpfully orient sensitive judgments…

The group did not oppose such spying on foreign leaders for information when there is “no threat” to US “national security.” It acknowledged it “might be helpful to know in advance about another nation’s internal concerns and priorities” ahead of meetings with nations on “bilateral economic issues.” Yet, the group added there are risks if such spying ever becomes public.

WikiLeaks pointed to one key difference between these revelations and the scandal over US spying on Merkel.

“While the German disclosures focused on the isolated fact that senior officials were targeted by US intelligence, WikiLeaks’ publication today provides much greater insight into US spying on its allies, including the actual content of intelligence products deriving from the intercepts, showing how the US spies on the phone calls of French leaders and ministers for political, economic and diplomatic intelligence,” the media organization stated in its press release.

Reacting to the revelations, Francois-Bernard Huyghe, a senior adviser at France’s Institute of International and Strategic Relations (IRIs) told The Local, “We’ve known about the Americans spying since the 1990s. What can France do? Frankly nothing. It is so heavily involved with the US and the government is pro-American.”

There may be threats from France to suspend trade negotiations, issue economic sanctions or consider granting Snowden asylum. But not much of a response will happen because France will not want anything that would seriously jeopardize a close relationship with the US.

As former Secretary of Defense Robert Gates put it when WikiLeaks began to publish 250,000 US State Embassy cables, “The fact is, governments deal with the United States because it’s in their interest, not because they like us, not because they trust us, and not because they believe we can keep secrets.”

“Is this embarrassing? Yes. Is it awkward? Yes. Consequences for US foreign policy? I think fairly modest.”