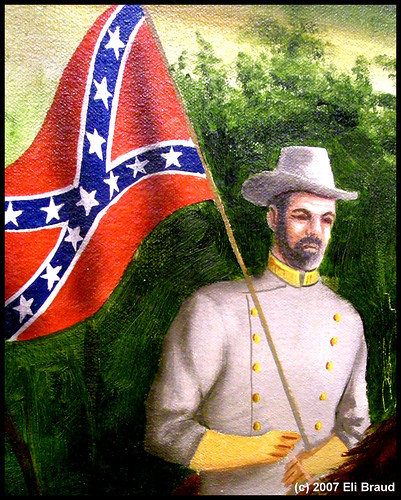 “On its world”, said Ford “The people are people. The leaders are lizards. The people hate the lizards and the lizards rule the people.” “Odd,” said Arthur, “I thought you said it was a democracy.” “I did,” said Ford. “It is.” “So,” said Arthur, hoping he wasn’t sounding ridiculously obtuse, “why don’t people get rid of the lizards?”

“You mean they actually vote for the lizards?” “Oh yes,” said Ford with a shrug, “of course.” “But,” said Arthur, going for the big one again, “why?” “Because if they didn’t vote for a lizard,” said Ford, “the wrong lizard might get in. Got any gin?” “I’ll look. Tell me about the lizards.”
Ford shrugged again.
“Some people say that the lizards are the best thing that ever happenned to them,” he said. “They’re completely wrong of course, completely and utterly wrong, but someone’s got to say it.”

Another over act of racism and bigotry, this time is Charleston South Carolina..yawn. I was pointed to two articles on this subject, both of which..especially taken together shine a great deal more light on this. Indeed the first one is very eye opening to me. Not a Tea Party, a Confederate Party by Doug Muder, a 50-something ex-mathematician who lives in Nashua, NH who writes the blog The Weekly Sift.

In it he makes a very good case for saying the Civil War did not end with Lee surrendering to Grant at Appomattox,  it actually became a guerilla war and the confederates won.

The Lost Cause. At about the same time my American history class was leaving a blank spot after 1865, I saw Gone With the Wind, which started filling it in like this: Sadly, the childlike blacks weren’t ready for freedom and full citizenship. Without the discipline of their white masters, many became drunks and criminals, and they raped a lot of white women. Northern carpetbaggers used them (and no-account white scalawags) as puppets to control the South, and to punish the planter aristocrats, who prior to the war had risen to the top of Southern society through their innate superiority and virtue.

But eventually the good men of the South could take it no longer, so they formed the Ku Klux Klan to protect themselves and their communities. They were never able to restore the genteel antebellum society — that Eden was gone with the wind, a noble but ultimately lost cause — but they were eventually able to regain the South’s honor and independence. Along the way, they relieved their beloved black servants of the onerous burden of political equality, until such time as they might become mature enough to bear it responsibly.

That telling of history is now named for its primary proponent, William Dunning. It is false in almost every detail. If history is written by the winners, Dunning’s history is the clearest evidence that the Confederates won. [see endnote 1]

Mind you, you really cannot separate the southern aristocrats  from those of today or today’s bigoted white confederates. Except for their bank accounts, they are inter changeable. They have have the same white male supremacist attitudes and designs.

After the U.S. forces won on the battlefield in 1865 and shattered the organized Confederate military, the veterans of that shattered army formed a terrorist insurgency that carried on a campaign of fire and assassination throughout the South until President Hayes agreed to withdraw the occupying U. S. troops in 1877. Before and after 1877, the insurgents used lynchings and occasionalpitchedbattles to terrorize those portions of the electorate still loyal to the United States. In this way they took charge of the machinery of state government, and then rewrote the state constitutions to reverse the postwar changes and restore the supremacy of the class that led the Confederate states into war in the first place. [2]

By the time it was all over, the planter aristocrats were back in control, and the three constitutional amendments that supposedly had codified the U.S.A’s victory over the C.S.A.– the 13th, 14th, and 15th — had been effectively nullified in every Confederate state. The Civil Rights Acts had been gutted by the Supreme Court, and were all but forgotten by the time similar proposals resurfaced in the 1960s. Blacks were once again forced into hard labor for subsistence wages, denied the right to vote, and denied the equal protection of the laws. Tens of thousands of them were still physically shackled and subject to being whipped, a story historian Douglas Blackmon told in his Pulitzer-winning Slavery By Another Name.

So Lincoln and Grant may have had their mission-accomplished moment, but ultimately the Confederates won. The real Civil War — the one that stretched from 1861 to 1877 — was the first war the United States lost.

And as the latest incident shows, it really has not abated much since. Not only is all of this to keep the white aristocracy  on top, but to keep our form of capitalism running. For without slavery and inequity and economic oppression, our capitalistic economy would have fizzled and likely collapsed immediately.

In fact the author point out how this confederate – white supremacist – world view is alive and well today.

But the enduring Confederate influence on American politics goes far beyond a few rhetorical tropes. The essence of the Confederate worldview is that the democratic process cannot legitimately change the established social order, and so all forms of legal and illegal resistance are justified when it tries.

That worldview is alive and well. During last fall’s government shutdown and threatened debt-ceiling crisis, historian Garry Wills wrote about our present-day Tea Partiers: “The presiding spirit of this neo-secessionism is a resistance to majority rule.”

The Confederate sees a divinely ordained way things are supposed to be, and defends it at all costs. No process, no matter how orderly or democratic, can justify fundamental change.

When in the majority, Confederates protect the established order through democracy. If they are not in the majority, but have power, they protect it through the authority of law. If the law is against them, but they have social standing, they create shams of law, which are kept in place through the power of social disapproval. If disapproval is not enough, they keep the wrong people from claiming their legal rights by the threat of ostracism and economic retribution. If that is not intimidating enough, there are physical threats, then beatings and fires, and, if that fails, murder.

That was the victory plan of Reconstruction. Black equality under the law was guaranteed by the 14th Amendment. But in the Confederate mind, no democratic process could legitimate such a change in the social order. It simply could not be allowed to stand, and it did not stand.

There is still going on the systematic undoing of all laws and civil rights action that challenge the old aristocratic order. This is why those of this mind will vote for and support those we see as acting against the self interest. The elites and bankers and CEOS all represent to old order and to fight against that would be…sacrilege.

This also why they quite literally hold on to their guns with a death’s grip.

Gun ownership is sometimes viewed as a part of Southern culture, but more than that, it plays a irreplaceable role in the Confederate worldview. Tea Partiers will tell you that the Second Amendment is our protection against “tyranny”. But in practice tyranny simply means a change in the established social order, even if that change happens — maybe especially if it happens — through the democratic processes defined in the Constitution. If the established social order cannot be defended by votes and laws, then it will be defended by intimidation and violence. How are We the People going to shoot abortion doctors and civil rights activists if we don’t have guns?

You know, our Founding Fathers, they put that Second Amendment in there for a good reason and that was for the people to protect themselves against a tyrannical government. And in fact Thomas Jefferson said it’s good for a country to have a revolution every 20 years. I hope that’s not where we’re going, but, you know, if this Congress keeps going the way it is, people are really looking toward those Second Amendment remedies and saying my goodness what can we do to turn this country around? I’ll tell you the first thing we need to do is take Harry Reid out.

Angle wasn’t talking about anything more “tyrannical” than our elected representatives voting for things she didn’t like (like ObamaCare or stimulus spending). If her side can’t fix that through elections, well then, the people who do win those elections will just have to be intimidated or killed. Angle doesn’t want it to come to that, but if liberals won’t yield peacefully to the conservative minority, what other choice is there?

This world view was not restricted to the southern states, by no means.  It was and is very prevalent in the north, where northern states enacted laws to restrict and even prevent blacks from entering. And as this piece from the Guardian makes clear, it still goes on.

For those who like to bring up blue collar America and unions and how they were the first to accept black membership, think about this. It was blue collar America that voted in mass for Ronald Reagan not once but twice. The most bigoted president ever. Blacks represented numbers to unions.

So if and when this country erupts once again in violence it will be this white supremacist thinking that will be behind it. So the confederate battle flag represents to these peope a whole lot more than just history, it represents a social, economic and political system they want desperately restored.

Tsarnaev admits guilt, apologizes and is sentenced to death UPDATED BELOW