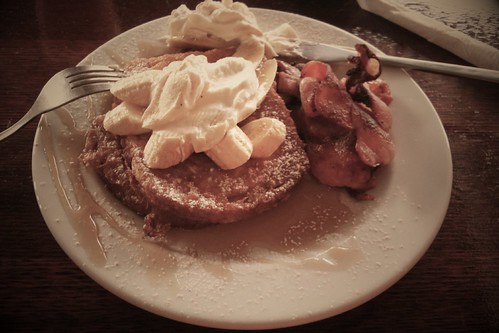 (Picture courtesy of enni at flickr.com.)

Being in England means being close to, and able to get, clotted cream.   I wish you all to be able to have this delicacy.

Clotted cream (sometimes called scalded, clouted, Devonshire or Cornish cream) is a thick cream made by indirectly heating full-cream cow’s milk using steam or a water bath and then leaving it in shallow pans to cool slowly. During this time, the cream content rises to the surface and forms “clots” or “clouts”.[1] It forms an essential part of a cream tea.

Although its origin is uncertain, the cream’s production is commonly associated with dairy farms in South West England and in particular the counties of Cornwall and Devon. The current largest commercial producer in the UK is Rodda’s in Redruth, Cornwall, which can produce up to 25 tons (25,000 kg; 55,000 lb) of clotted cream a day.[2] In 1998 the term Cornish clotted cream became a Protected Designation of Origin (PDO) by European Union directive, as long as the milk is produced in Cornwall and the minimum fat content is 55%…. regional archaeologists [14][15] have associated the stone fogou (dial. ‘fuggy-hole’), or souterrains, found across Atlantic Britain, France and Ireland as a possible form of ‘cold store’ for dairy production of milk, cream and cheese in particular. Similar functions are ascribed the linney (dial. ‘lean-to’) stone-built form, often used as a dairy in later medieval longhouses in the same regions.[16]

Today, there are two distinct modern methods for making clotted cream. The “Float Cream method” includes scalding a floating layer of double cream in milk (skimmed or whole) in shallow trays. To scald, the trays are heated using steam or very hot water. After the mixture has been heated for up to an hour it is slowly cooled over 12 hours or more, before the cream is separated and packaged.[5] The “Scald Cream method” is similar, but the milk layer is removed and a layer of cream which has been mechanically separated to a minimum fat level is used. This cream is then heated in a similar manner, but at a lower temperature and after a set amount of time it is then chilled and packaged.[5] In the United Kingdom the resultant cream is deemed to be equivalent to pasteurised for legal purposes. Unlike pasteurisation, however, there is no requirement for the temperatures to be recorded on thermograph charts.[28] As the temperatures are lower than used in standard pasteurisation, much care is needed in ensuring high standards of hygiene.

Now I’m going out to the store for some clotted cream.   Can’t help it.   I wish you clotted cream one of these days, but I can’t bring you back any.