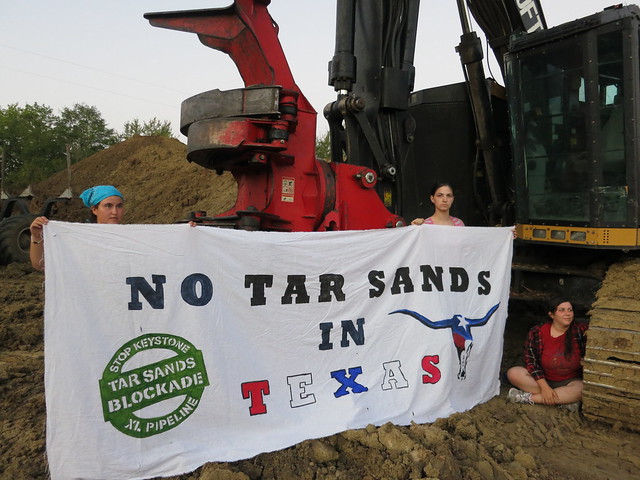 The Federal Bureau of Investigation (FBI) broke its own internal rules when it spied on Keystone XL opponents in Texas, violating guidelines designed to prevent the agency from becoming overly involved in complex political issues, a new report by the Guardian and Earth Island Journal published Tuesday has revealed.

Internal documents acquired by the outlets through a Freedom of Information Act (FOIA) request show how the FBI failed to get approval for launching investigations into Houston-based protesters, whom the agency labeled “environmental extremists,” and held a bias in favor of the controversial tar sands pipeline—currently awaiting federal approval—extolling its supposed economic benefits in one document which outlined reasons for spying on its opponents.

“Many of these extremists believe the debates over pollution, protection of wildlife, safety, and property rights have been overshadowed by the promise of jobs and cheaper oil prices,” the file states. “The Keystone pipeline, as part of the oil and natural gas industry, is vital to the security and economy of the United States.”

Between November 2012 and June 2014, the documents show, the FBI collated inside knowledge about forthcoming protests, documented the identities of individuals photographing oil-related infrastructure, scrutinised police intelligence and cultivated at least one informant.

….However, the partially redacted documents reveal the investigation into anti-Keystone activists occurred without prior approval of the top lawyer and senior agent in the Houston field office, a stipulation laid down in rules provided by the attorney general.

Additionally, the FBI appeared to have opened its file on the Keystone XL opponents in 2013 following a meeting between officials from the agency and TransCanada, the company building the pipeline.

“For a period of time—possibly as long as eight months—agents acting beyond their authority were monitoring activists aligned with [direct action climate group] Tar Sands Blockade,” the Guardian writes.

Dozens of activists were arrested in Texas in late 2012, although none were accused of violent crime or property damage, according to key Tar Sands Blockade organizer, Ron Seifert.

“Less than a month after TransCanada showed the FBI a PowerPoint claiming that people opposed to [Keystone XL] need to be watched, Houston’s FBI office cuts corners to start an investigation; it’s not surprising but it is revealing of who they really work for,” Seifert told Common Dreams on Monday. “The FBI has been harassing and actively repressing communities of organizers for decades.”

Yet more records show that the FBI associated the Tar Sands Blockade, which organizes peaceful protests, with other “domestic terrorism issues.”

Other documents suggest that the Houston-based investigation was only one of a larger probe, possibly monitoring other anti-Keystone XL activists around the country.

“We’re not surprised,” Seifert continued. “We’re also not deterred. Movements for climate and environmental justice are activating people from diverse political backgrounds to take direct action to defend themselves from threats like [Keystone XL]. People are stepping out of the blind alleys of electoral politics and building grassroots power, and that’s scary for people who want a monopoly on power.”