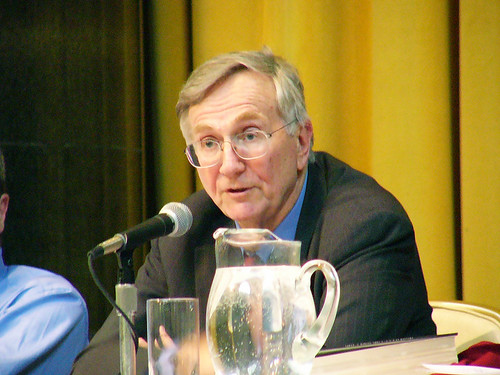 Most distressing about investigative journalist Seymour Hersh’s story on the lies President Barack Obama’s administration reportedly told about the killing of Osama bin Laden is the general reaction of the United States establishment press.

Hersh is an award-winning journalist best known for exposing the My Lai massacre in the Vietnam War. It earned him a Pulitzer Prize. He also did stellar reporting on the abuse and torture of detainees at the infamous Abu Ghraib prison. Yet, most establishment press seem to be shrugging at Hersh’s latest 10,000-word feature story published by the London Review of Books or they are snidely dismissing it altogether.

Is it because most in the US press wholly accept the narrative put forward by the Obama administration around the raid that killed bin Laden? Is it because they have moved on and no longer find it worthy to investigate what really happened? Is it because they do not want to believe what Hersh is alleging because it amounts to a major international espionage conspiracy if it all happens to be true?

Christopher Frizzelle of The Stranger already went to the trouble to list off each allegation against the Obama administration that is made in Hersh’s story. So, courtesy of Frizzelle:

• Pakistani officials knew about the raid and even helped the US pull it off.

• There never was a firefight, neither in the yard outside the house nor once the Seals got inside.

• The story of the courier whom the reportedly CIA traced, leading them to bin Laden, was a fabrication.

• The story of the courier dying in the firefight was a cover-up “because he didn’t exist and we couldn’t produce him,” a retired senior intelligence official told Hersh.

• The way the CIA actually found out where bin Laden was is that a “Pakistani walk-in” who wanted the $25 million reward came in and told the CIA about it.

• Osama bin Laden was not armed, contrary to reports that he had a machine gun and was killed in a firefight, and he was not killed with just one or two bullets but “obliterated.”

• “Seals cannot live with the fact that they killed bin Laden totally unopposed, and so there has to be an account of their courage in the face of danger. The guys are going to sit around the bar and say it was an easy day? That’s not going to happen,” that same retired senior intelligence official said.

• “Despite all the talk” about what the Seals collected on site, the retired official said there were “no garbage bags full of computers and storage devices. The guys just stuffed some books and papers they found in his room in their backpacks.”

• The story about bin Laden’s sea burial may be a fabrication.

• The retired official told Hersh that bin Laden’s “remains, including his head… were thrown into a body bag and, during the helicopter flight back to Jalalabad, some body parts were tossed out over the Hindu Kush mountains—or so the Seals claimed.”

• Obama was going to wait a week until after bin Laden’s death to announce it, and he was going to tell the American people that bin Laden had been killed by a drone, but after the Seals had to blow up their malfunctioning helicopter onsite, attracting attention locally, everything changed.

• The story about the vaccination program carried out locally in an attempt to get bin Laden’s DNA—a story that “led to the cancellation of other international vaccination programmes that were now seen as cover for American spying”—wasn’t true.

What are Hersh’s sources for these claims against the Obama administration?

Hersh relies on a “major US source” who is not named in the story. The person is described as a “retired senior intelligence official who was knowledgeable about the initial intelligence about bin Laden’s presence in Abbottabad.” He also sources his claims to two additional unnamed US sources, “who had access to corroborating information” and have been “longtime consults to the Special Operations Command.”

He writes that he received information from “inside Pakistan” that indicates “senior ISI and military leadership” were upset with Obama’s decision to immediately go public with the news that bin Laden was killed. He also quotes Asad Durrani, who was the head of Pakistan’s spy agency, the ISI, in the 1990s.

One of the key criticisms of Hersh’s story is that it relies on anonymous sources. However, should this criticism be allowed to invalidate the claims put forward by Hersh?

I have zealously criticized the frequent use of anonymous sources by journalists. It happens quite often at the New York Times and The Washington Post. However, as Times public editor Margaret Sullivan has articulated:

For many journalists, they can be a necessity. And that necessity is increasing — especially for stories involving national security — now that the Obama administration’s crackdown on press leaks has made news sources warier of speaking on the record. (Leonard Downie Jr. , a former executive editor of The Washington Post, has written revealingly about this for the Committee to Protect Journalists.)

“It’s almost impossible to get people who know anything to talk,” Bill Hamilton, who edits national security coverage for The Times, told me. Getting them to talk on the record is even harder. “So we’re caught in this dilemma.”

There is a tradition in journalism of using anonymous—or confidential sources—to expose scandal. Watergate and warrantless wiretapping were both revealed in this manner.

Which ultimately leads one to conclude that the problem members of the establishment press and others reflexively have with Hersh is not that he uses anonymous sources but that he uses these anonymous sources to challenge a narrative they have already decided to accept as truth. If that narrative is wrong, they have to seriously rethink what they have been doing as journalists, especially if they report on war or national security matters.

OK. We have at @thedailybeast folks with excellent Pakistani + US spec ops sources. They're reacts to the Hersh story? Uh, nope.

That a bunch of unnamed Pakistani and US special operations sources dismiss Hersh’s story as pure bunk does not really disprove anything in his story. What if these sources are somehow invested in the narrative of events that players involved in the raid. What if they are somehow wedded to the statements of officials deployed to sell Americans a certain story about the operation?

It should be noted that many of these same journalists reacting to Hersh’s story also dismissed his latest investigative journalism on Turkey’s potential role in the Syria chemical attack that nearly sparked US attacks and the Obama administration’s “cherry-picking” of intelligence to justify launching a war after the chemical attack.

Members of the US establishment press are not generally opposed to the use of anonymous sources in national security reporting. They just are collectively only comfortable with telling certain stories with anonymous sources, and, in this case, it is clear one of those stories will never be about how the Obama administration and CIA were in on an international espionage conspiracy to kill bin Laden.

Unquestionably, if Hersh’s story is the truth, which is entirely possible, then Zero Dark Thirty is an even greater masterpiece of propaganda. CIA officers on contract developed a cover story that would help the CIA publicly defend its torture program. Officials would say that information used to catch bin Laden came from “enhanced interrogation.” (Press in Washington, DC, were mostly positive about the film initially.)

If it is truth, it also means that journalists fell victim to a grand disinformation campaign perpetrated by the Obama administration. It may not be as embarrassing and troubling as what happened around the march to war in Iraq, but it still demonstrates how easily officials can manipulate the press to tell the story they want told about the “War on Terrorism.” And, generally, it is a key example of how the Obama administration packaged an assassination operation and slickly exploited it to ensure Obama’s re-election campaign went smoothly.

Rather than mocking Hersh’s story, a better response for skeptics would be to actually prove Hersh wrong through journalism. The only problem is no journalist is likely to spend time digging to prove Hersh wrong if they already think they know what exactly occurred—and many US journalists seem to think they know what happened so there is no need to pursue this story any further.

What this means is Americans are likely to be left with a fascinating counter-history to the Obama administration’s official story of events that becomes a Rorschach test. It is true if you doubt most of what the government tells you about the “war on terrorism,” and it is false if you believe the government is mostly right to be waging the “war on terrorism.” But no one will ever quite know.

Judging the reaction of establishment journalists, it also is a Rorschach test for them too. His sourcing is flawed because they have decided these are anonymous sources they would never rely on for a story as damning as this one. But, if Hersh had uncovered an angle to the story that added details but did not challenge the Obama administration, Special Operations Command and the CIA, they might think his anonymous sources were worth believing.

Max Fisher of Vox’s initial reaction to Hersh’s story was the following:

i guess hersh will explain the opus dei / knights of malta connection in the next piece pic.twitter.com/LQG31D3jZx

Fisher now has a post at Vox on Hersh’s “conspiracy theory.”

I’ll only focus on the last paragraph for now because it is perfectly in line with what I argued in this post:

Maybe there really is a vast shadow world of complex and diabolical conspiracies, executed brilliantly by international networks of government masterminds. And maybe Hersh and his handful of anonymous former senior officials really are alone in glimpsing this world and its terrifying secrets. Or maybe there’s a simpler explanation.

That is essentially the attitude I suggested journalist critics are exhibiting and will continue to exhibit toward Hersh. Someone like Fisher is not opposed to anonymous sources. He just does not like what Hersh’s anonymous sources are alleging about the world.