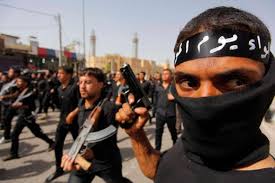 Because America does not have enough war in the Middle East at present, and because more American arms introduced into any situation always make things better, Senator Joni Ernst introduced on Wednesday legislation to provide arms directly to the Kurds in Iraq, ostensibly so they could fight Islamic State (IS).

A companion bill was introduced in the House of Representatives and has some bipartisan support.

For those who accidentally landed here thinking this was a Game of Thrones fan fiction site, a quick recap of what is going on with the Kurds, Iraq and IS.

Prior to the U.S. invasion of Iraq in 2003, the country’s three major ethnic/religious groups — the Sunni, Shia and Kurds — were held in rough togetherness by Saddam and his police state. The U.S. broke all that, but failed to replace the police state with a functioning nation state. Hilarity ensued, plus 13+ years of internecine violence.

IS moved into Iraqi territory more or less on the side of the Sunnis in 2014. The Shia-led central government, supported and armed by the U.S. and Iran, along with the Kurds, went to war against IS.

The U.S. likes the Kurds, because they are non-Arab Muslims and have supported the many U.S. interventions in Iraq over the years. The Iranians do not really care for the Kurds, as they fear Kurdish independence inside Iraq will enflame their own Kurd minority.

The Kurds, who are essentially a de facto independent nation inside the rotting shell of “Iraq,” made common cause with the Shia’s against the threat of IS. The Kurds, however, have big plans for their own state, and are kept in check in part by the U.S.

One tool for that is making sure (most of) their weapons flow through the central Shia government.

Why This New Legislation is a Bad Idea

Not supplying weapons directly to the Kurds is not much of a policy, but it is what Obama went to war with, and it is not altogether bad. A balance of power in Iraq serves American interests and gives the U.S. leverage over the Shias.

The new Senate legislation will not likely pass, and even if it does, it will not force Obama to do anything. The actual on-the-ground policy toward the Kurds and their weapons is unlikely to change in the near-to-midterm. Only another collapse of Shia forces in the face of a new IS advance will alter policy.

Still, the action by the Senate reveals how clueless some Senators are toward the complex reality on the ground in Iraq (the Democratic supporters) and how willing to play politics with global events some are (the Republicans, especially Rand Paul and Marco Rubio, both presidential contenders.)

Just because we already know nothing good is going to come out of this latest Iraq War does not mean we still can’t find ways to make it even worse.

I had the chance to talk about all this on RT.com (the announcer says I am in Baghdad, not true. I am happily thousands of miles away, in New York):