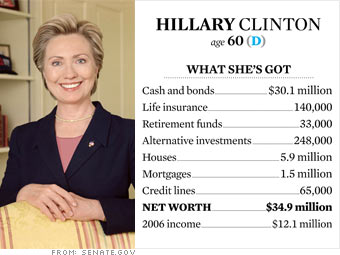 The State Department said Monday it has no evidence that any actions taken by Hillary Clinton when she was secretary of state were influenced by donations to the Clinton Foundation or former President Bill Clinton’s speaking fees.

That may indeed be true, but it misses the real point. Simply because her actions may not have risen to provable criminal levels, the real issue is about trust. The numbers don’t lie. And this is not a partisan attack, it’s accounting. And accountability.

The Boston Globe seems to get that. It reported a huge Clinton charity failed to report its foreign-government contributions to the State Department as required.

When Hillary became Secretary of State in 2009, she agreed to have her family’s foundation submit new donations from foreign countries for State Department review. This was designed to avoid potential conflicts of interest, given her new government role. The arrangement was made by an Obama administration covering its flanks over the appearance, at a minimum, of impropriety.

Rules are for Fools

The Clinton Foundation repeatedly violated this agreement with the Obama White House.

But the Globe’s report on the Clinton Health Access Initiative (CHAI), yet another foundation affiliate (these people have more shell groups than a Mafia crime family), may cover the most notable omissions yet. Tens of millions of dollars went undisclosed to the State Department.

“Government grants to CHAI, nearly all of them from foreign countries, doubled from $26.7 million in 2010 to $55.9 million in 2013, according to the charity’s tax forms,” The Globe reported. CHAI “makes up nearly 60 percent of the broader Clinton charitable empire” and has an annual budget of more than $100 million.

About that Agreement with the White House

A CHAI spokeswoman told The Globe that her organization “didn’t think” it needed to report many of the contributions because they were simply increased payments from existing donor countries.

The memorandum of understanding the Clinton Foundation reached with the White House, however, indicates otherwise under CHAI’s section of the agreement:

Should an existing contributing country elect to increase materially its commitment, or should a new contributor country elect to support CHAI, the Foundation will share such countries and the circumstances of the anticipated contribution with the State Department designated agency ethics official for review.

A spokesperson for Secretary of State John Kerry said CHAI should have disclosed the contributions.

“We would have expected that CHAI identify for the Department the foreign-country donors that elected to materially increase their donations and new country donors. The State Department believes that transparency is the critical element of that agreement,” the spokesperson told The Globe.

The Boston Globe reported CHAI also failed to disclose numerous payments from new donor countries. CHAI offered several explanations: Switzerland was an “oversight.” Rwanda’s $300,000 was considered a “fee” rather than a contribution. CHAI did not consider Flanders a “foreign government” because it is part of Belgium rather than an independent country.

The agreement the Clinton Foundation struck with the White House, however, said CHAI contributions should be considered “a foreign country” if they are from “an agency or department of a foreign country, as well as a government-owned corporation.”