Who Asked for Leniency for Petraeus for Leaking Classified Material? It’s Classified 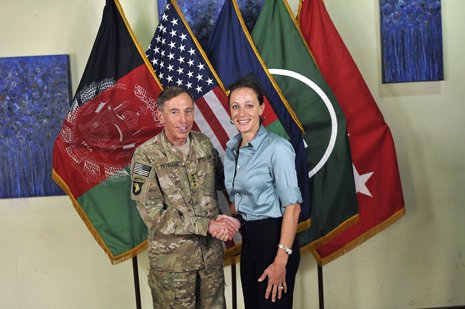 After selling America a bill of goods that he claimed won Iraq War 2.0 (i.e., “The Surge,” yeah, how’d that work out Dave?), General Dave went on to head the CIA, where he strongly supported long prison terms for whistleblowers like Chelsea Manning and John Kiriakou, claiming in the latter case that secrecy oaths “do matter.”

Then of course when it became his turn, General Dave happily handed over higher classified data than either Manning or Kiriakou even had access to, all to his adulterous lover and so-called biographer, Paula Broadwell. How’s that for a two-fer, violating both his oath of secrecy and his oath of marriage in one soggy gesture?

But this is America, where justice is blind and all. Right?

So when David Petraeus was sentenced last week to a mere two years of probation and a fine that is only a fraction of what he gets paid to make a speech these days, questions were asked. Why did Petraeus get off, so to speak, so easily?

Apart from the general sleaze in Washington DC, U.S. Magistrate Judge David Keesler said as part of the plea deal he received letters supporting leniency for the general. In fact, Keesler received nearly three dozen such letters, including some from “high-level military and government officials.”

“The letters paint a portrait of a man considered among the finest military leaders of his generation who also has committed a grave but very uncharacteristic error in judgment,” Keesler said at the sentencing hearing.

It might be interesting to see who in Washington supported a confessed leaker of highly-classified documents. But despite Petraeus’ light sentence being based in part on those letters, no one can see them. The letters were filed under seal by Petraeus’ lawyers, which the judge agreed to. No explanation was given by the lawyers or the judge about what public interest was served by keeping the authors and the contents of the support letters hidden.

Several media outlets, from The Associated Press to The Washington Post, filed suit Monday with Keesler demanding that he unseal them. But unless the judge is also sleeping with Paula Broadwell (who, by the way, was never charged with unlawfully receiving classified documents) and also, um, leaks, we may never know.

Who Asked for Leniency for Petraeus for Leaking Classified Material? It’s Classified