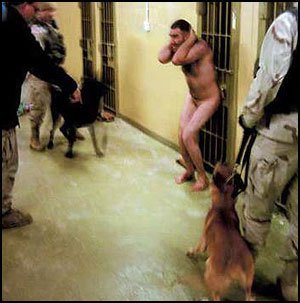 The few photos publicly seen of the abuses American soldiers committed inside the Abu Ghraib prison are only a tiny portion of the whole (former Senator Joe Lieberman said in 2009 that there were nearly 2,100 more photographs.)

The photos, such as the ones you see here, were released by a whistleblower. A significant number of photos, said to show acts of sodomy and brutality far worse than what is already known, have been kept from the public by the U.S. government for eleven years now, ostensibly to protect American forces from retaliation. Since the American Civil Liberties Union first filed a lawsuit against the government in 2004 seeking the release of the photographs, the government has been successful in blocking them. That may — may — change.

A federal judge ruled March 20 that the U.S. government must release photographs showing the treatment of detainees in U.S. custody at the Abu Ghraib prison in Iraq and other sites. However, Judge Alvin Hellerstein in Manhattan ruled that his order would not take effect for 60 days to give the U.S. Department of Defense time to decide whether to appeal.

“The photos are crucial to the public record,” ACLU’s deputy legal director said. “They’re the best evidence of what took place in the military’s detention centers, and their disclosure would help the public better understand the implications of some of the Bush administration’s policies.”

Meanwhile, the horrors of Abu Ghraib done in our names, and well-known to the Iraqi victims, remain shielded from only the American public by their own government.