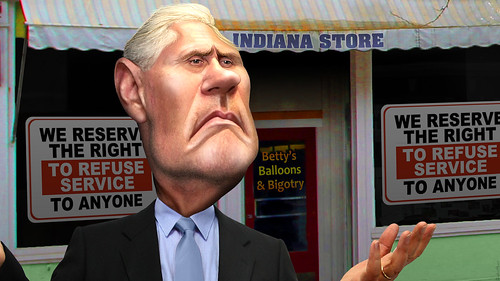 ‘It feels like we’re going back 50 years in time,’ one protester said of state-sanctioned discrimination

Indiana lawmakers are scrambling to backpedal as a fierce backlash has taken hold against Republican Governor Mike Pence since he signed into law legislation that effectively permits discrimination against people thought to be lesbian, gay, bisexual, transgender, or queer.

Under the handle #BoycottIndiana, LGBTQ activists and supporters across the nation are vowing economic retribution against the state.

The so-called “Religious Freedom Restoration Act,” signed into affect on Thursday, prohibits state laws that “substantially burden” a person’s ability to follow his or her religious beliefs. The definition of “person” includes religious institutions, businesses and associations. Critics say that the measure protects individuals or businesses that violate anti-discrimination laws.

Across the state, stickers have already begun appearing in storefront windows that read: “This business serves everyone.”

On Saturday, hundreds of activists rallied outside the Statehouse calling for Pence’s resignation. Crowds chanted “Pence must go” and held signs reading “I’m pretty sure God doesn’t hate anyone” and “No hate in our state,” the Guardian reports.

“It’s crazy. It feels like we’re going back 50 years in time,” one protester told CBS 4 reporter Shannon Houser, “I can’t believe this is really happening.”

Prominent voices have also joined in condemning the act. The mayors of Seattle and San Francisco have both announced they are cancelling all travel plans to the state. On Saturday, the popular business review site Angie’s List announced it is putting on hold a $40 million renovation and plans to add 1,000 more jobs to a new location in Indianapolis.

Further, NBA superstar and NCAA analyst Charles Barkley called for the upcoming college basketball tournament finals, which will be held in Indianapolis’ Lucas Oil Stadium April 4-6, to be moved to another state. And Jason Collins, the first openly-gay NBA star, tweeted: “@GovPenceIN, is it going to be legal for someone to discriminate against me & others when we come to the #FinalFour?”

The law is part of a national wave backing state-sanctioned discrimination against LGBTQ communities under the pretext of “religious freedom.” The Arkansas Senate approved a similar proposal Friday and another measure stalled Thursday in the Georgia Legislature after opponents cited the fallout over the Indiana law.

Even the state’s conservative backbone has come out against the law in the face of the uproar. The Guardian reports:

Indianapolis mayor Greg Ballard, a Republican who opposed the law, said he and other city officials would be talking to many businesses and convention planners to counter the uproar the law has caused.

“I’m more concerned about making sure that everyone knows they can come in here and feel welcome,” Ballard said.

Groups such as the Indiana Chamber of Commerce have posted social media messages saying the state is full of welcoming businesses. Democratic South Bend mayor Pete Buttigieg touted on Twitter his city’s civil rights ordinance’s protections for gays and lesbians, while Republican Evansville mayor Lloyd Winnecke wrote that the law “sends the wrong message about Indiana”.

Appearing on ABC’s “This Week” on Sunday, Pence defended the law and said that it will not change despite protests. A day prior, in an interview with the Indy Star, Pence said he would support legislation that clarifies the “intent of the law,” adding that he never anticipated “the hostility that’s been directed at our state.”