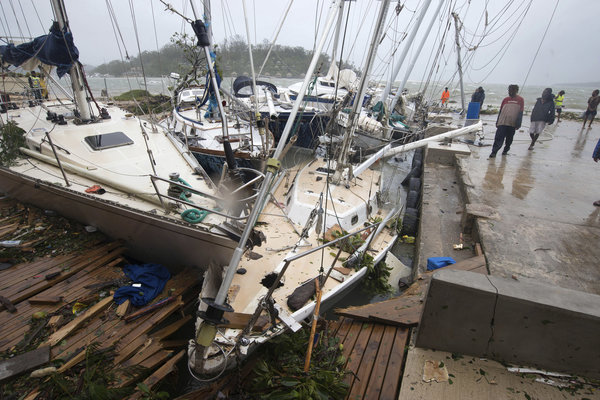 As Cyclone Pam devastated the South Pacific island nation of Vanuatu, where resources are already strained under the effects of climate change, United Nations officials and the country’s president on Saturday called for immediate action to prevent further disasters caused by global warming and extreme weather.

“I am speaking to you today with a heart that is so heavy. I do not really know what impact the cyclone has had on Vanuatu,” the country’s president, Baldwin Lonsdale, told the U.N. World Conference on Disaster Risk Reduction in Sendai, Japan. “I stand to appeal on behalf of the government and the people to give a helping hand in this disaster.”

Early reports estimated that at least eight people died as one of the Pacific Ocean’s most powerful storms ever ripped through Vanuatu on Friday and Saturday, with the death toll expected to rise in the coming days. Approximately 20 were reported injured. That figure is also likely to grow substantially, according to Tom Skirrow, country director for Save the Children.

Reuters reports that winds of up to 210 mph tore apart the tiny island, uprooting trees, yanking roofs off houses, and cutting off almost all electrical power, leaving behind little more than “a looming threat of hunger and thirst.”

A sudden change of course in winds put large chunks of the population directly in the path of destruction, with winds peaking between midnight and 1am, according to reports.

The U.N. and other climate organizations have long warned that the most extreme weather patterns and disasters would be virtually impossible without human-caused climate change.

Vanuatu’s capital, Port Vita, was recently named in the Natural Hazards Risk Atlas, Oxfam stated on Saturday. It is known as “the city most exposed to natural disasters in the world because it faces a combination of risks including earthquakes, tsunamis, flooding and tropical cyclones such as Cyclone Pam.”

U.N. Secretary General Ban Ki-moon expressed his support for the nation on Saturday and stated that preventing these kinds of disasters is “everybody’s business.”

Ban said the best tribute to victims of disaster would be to ensure the gathering in Japan forges a strong framework for preventing and coping with catastrophes like the triple whammy of massive earthquake, tsunami and nuclear power plant meltdowns that hit northeastern Japan’s coastline, including Sendai, four years ago. More than 18,500 people died or were left missing.

“What we are discussing here is very real for millions around the world. We must keep their needs in sharp focus during the negotiations on this agreement,” Ban said.

Though low and middle income countries suffer nine out of 10 disaster-related deaths, and need special attention… “disaster risk is in everybody’s interest—and it is everybody’s business.”

Emmanuel Mori, president of the Federated States of Micronesia, on Saturday highlighted the need for global leaders to prioritize reducing carbon emissions and curbing the effects of climate change to avert future disasters on the same scale.

“The world must act and fast,” Mori said.

Chloe Morrison, a spokesperson for the World Vision aid group, told Reuters, “This is going to need a long and sustained response. People in Vanuatu are subsistence farmers. They grow food for their own consumption. Crops will be absolutely wiped out from this.”

Oxfam executive director Winnie Byanyima issued a grim warning on Saturday: “We hold grave fears for the people on these outer and remote islands. It’s becoming increasingly clear that we are now dealing with worst case scenario in Vanuatu.”

——————
This work is licensed under a Creative Commons Attribution-Share Alike 3.0 License