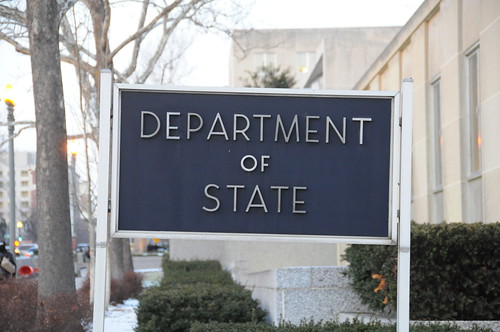 Former secretary of state and closeted 2016 Democratic presidential candidate Hillary Clinton has asked the State Department to review her emails for release. But the State Department is one of the worst performing agencies when it comes to the Freedom of Information Act. It could be years before individuals and media organizations obtain the records they request, even if the department expedites the review and release of some emails.

The Center for Effective Government conducted an analysis [PDF] of fifteen agencies, which make up “over 90 percent of all FOIA requests received in FY2012 and FY2013.” The agencies have “consistently received the most public information requests every year since FY2009.”

Grades were based on an agency’s timely processing of documents as well as whether the agency has “effective rules” and a “user-friendly information-rich FOIA website” for those interested in making requests.

The State Department was the “lowest scoring agency by far.” It processed only 17 percent of the FOIA requests received in 2013. This was “completely out of line with any other agency’s performance.”

Comparatively, the Agriculture Department and Social Security Administration scored the best. The Environmental Protection Agency and Justice Department “performed substantially worse at processing FOIA requests” than in the previous year.

Eleven agencies, including the State Department, have yet to update their FOIA policies since reform was passed in 2007. Agencies have also declined to adopt a “foreseeable harm standard,” which Attorney General Eric Holder promoted.

The “foreseeable harm standard” means agencies are supposed to only deny the release of records, which they reasonably foresee harming interests protected by exemptions already in FOIA. The Justice Department, Pentagon and National Archives and Records Administration (NARA) incorporated this standard into their processing of FOIA requests. The FOIA Improvement Act, reported out of the Senate Judiciary Committee in February, requires agencies to adopt this standard.

“The State Department was the only agency in the scorecard whose rules do not require staff to notify requesters when processing is delayed, even though this is mandated by law,” according to the analysis.

Additional reasons why the State Department was a “serious outlier”:

…While 65 percent of its requests were simple, only eight percent were processed within the required 20 days. The State Department had the second-largest request backlog and the third-lowest rate of fully-granted requests. Only 51 percent of requests were granted in full or in part at the State Department. The agency also had the longest average processing time for appeals – 540 days, or roughly a year and a half – and the second-largest backlog of appeals.

Health and Human Services was found to have the largest appeals backlog. NARA had the largest request backlog—and part of that may be because of “complex requests” requiring “time-consuming information gathering” from archives.

[*Note: The CIA, NSA and Treasury were not part of the Center for Effective Government’s analysis.]

The experience of the Associated Press reflects the abysmal record of the State Department. It filed a lawsuit on March 11 to “force the release of email correspondence and government documents from Clinton’s tenure as secretary of state.”

The lawsuit involves one request AP submitted in 2010 and others submitted since 2013. These requests ask for material about her role in the raid that killed Osama bin Laden and National Security Agency surveillance.

Multiple-year delays make it difficult for AP journalists to cover these records when they are likely to have the most impact.

The State Department defends their record by claiming it “does its best to meet its FOIA responsibilities” and the “department takes requests ‘first in, first out,’ but noted that timing depends on ‘the complexity of the request.'” How do requests receive the label “complex” or “simple”? How political is the process of giving requests this label?

The National Security Archive, which recently filed a FOIA lawsuit against the State Department for the last 700 transcripts of former Secretary of State Henry Kissinger’s telephone calls, note an amendment to reform legislation in the House of Representatives may have gone a long way toward limiting the current political scandal.

The fix would “allow all FOIA processors access to all electronic records systems for the processing of FOIA requests,” Lauren Harper and Nate Jones of the National Security Archive wrote.

In a report on March 9, VICE’s Jason Leopold wrote, “State has received requests from journalists and watchdog groups dating back to 2010 for Clinton’s emails — several of which are still open. One filed by Gawker, for “correspondence” between Clinton and Blumenthal, was closed due to the fact State claims it could not locate any responsive documents. There is no indication that the State Department even attempted to ask Clinton or any of her advisers to conduct a search of her private emails in order to fulfill FOIA requests.”

Leopold, too, has sued the State Department for records, including Clinton-related documents and emails.

Journalists have submitted requests for emails related to the response to WikiLeaks’ publishing of diplomatic cables provided to the media organization by Chelsea Manning. One redacted email sent by then-State Department spokesperson PJ Crowley on Christmas Eve in 2010 has been released. The State Department still continues to delay and fight the processing of other outstanding requests.

Even if the State Department does suddenly begin to perform better because Clinton does not want their performance to affect her presidential campaign, it will mean the processing of requests for other records not related to Clinton will likely be stalled. Yet, maybe there is a silver lining and all this controversy will spur necessary FOIA improvements at the State Department and in other government agencies.