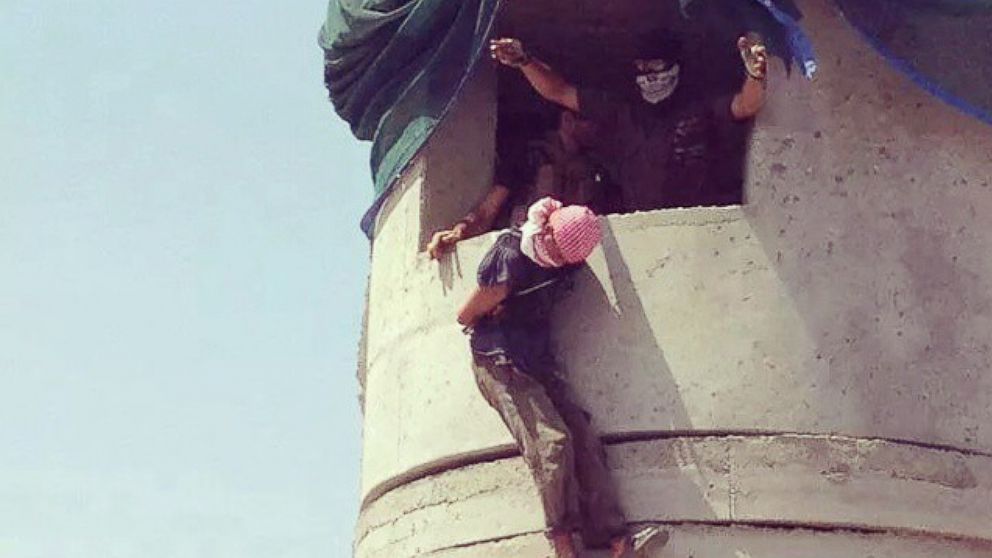 ABC News has posted a report on photos and videos showing soldiers from Iraq’s elite military units committing gruesome acts, including the torture and execution of detainees. Units implicated are the very units the United States helped to train from 2003 to 2011.

The individuals appear to be from Iraq’s Counter-Terrorism Forces and the Interior Ministry’s special police units, according to the ABC News report. Many are wearing patches, and some of them have patches indicating they are probably a part of Iraq’s Emergency Response Brigade (ERB), an Interior Ministry counter-terrorism unit.

ABC News collected what they describe as a “library of horrors” from Iraqi social media. They pictures and video show clear war crimes.

Examples of some of the atrocities committed:

—The severed head of an alleged Islamic State fighter is held in the air by a man in black, who appears to be from Iraq’s ERB (Photo)

—ERB officer steps on two heads that have been severed (Photo)

The Pentagon claimed it would investigate the photos and videos ABC News gathered. It also indicated it had already cut off funding and assistance to some Iraqi units.

A spokesperson for the Iraqi government, General Saad Maan, suggested these photos and videos might be part of a “clever ploy” by the Islamic State to spread propaganda to undermine those fighting them. Maan maintained these patches being worn can be bought from vendors on Iraqi streets.

Senator Patrick Leahy told ABC News the photos were evidence of “war crimes.” Under a law known as the Leahy Law, the US government has a legal obligation to cut off funds to any foreign military unit that is engaged in these kinds of human rights violations.

The latest country report from the State Department on Iraq’s human rights violations fully acknowledged the torture that has been ongoing in the country. It concluded, “A culture of impunity largely protected members of the security services, as well as those elsewhere in the government, from investigation and successful prosecution for human rights violations. Corruption among officials across government agencies was widespread and contributed to significant human rights abuses.”

Military incident reports disclosed by convicted and imprisoned US military whistleblower Chelsea Manning showed how the US adopted an order, Frago 242, where they looked the other way when Iraqi military or security forces engaged in torture or abuse.

Logs detailed how US interrogators threatened Iraqi detainees with the prospect of being turned over to the “Wolf Brigade” or “Wolf Battalion”:

The US has known for some time that the very people deployed on the front lines to fight terrorist groups are likely to engage in atrocities.

These photos and videos show very similar to the same barbaric acts committed by the Islamic State. And yet US officials, media pundits and the vast majority of Americans seem to think US and allied forces have some moral superiority.

Here is how Democratic minority leader, Senator Harry Reid, reacted to the burning of the Jordanian pilot in February:

…The brutality we thought had reached its pinnacle got worse. What ISIS did approximately 30 hours ago is put a Jordanian pilot in a cage—a cage—dump flammable liquid over that cage, and then film that man being burned alive for 22 minutes. We have been forced to watch that. Yes, ISIS is awful. The worst. Uncivilized. But that is what we are dealing with…

President Barack Obama has pledged the “United States will continue to lead a regional and international effort against the kind of barbaric and ultimately empty vision” of the Islamic State. But what is the vision of an Iraqi and US government, which has units which act as if they are death squads when engaged in operations?

The “desecration of war dead and extrajudicial killings,” as ABC News noted, are violations of the Geneva Conventions. Desecrating war dead and posing with severed body parts, however, is not something only Iraqi units or Islamic State militants have done. US soldiers have committed these acts too.

In April 2012, the Los Angeles Times reported on photos released by a US soldier who decided to blow the whistle on 82nd Airborne Division soldiers, who posed next to Afghan police while holding up severed limbs. TMZ reported in January 2014 on gruesome photos of Marines torching the bodies of dead Iraqi insurgents, who were killed in Fallujah in 2004.

The Rolling Stone’s major “Kill Team” story in 2011 detailed war crime images from a group of American infantrymen in Afghanistan, which the Pentagon tried to have censored.

Atrocities are escalating in Iraq now that Iran-backed Shiite militias are part of the fight against the Islamic State and tacitly aligned with US-led operations. While patently obvious, it is still worth stating: the photos and videos described by ABC News will not be the last posted to social media.

The next time there is outrage over something an Islamic State militant did to some innocent civilian think about those who are suffering similar war crimes because they are caught up in the warfare of those battling the Islamic State.

When does this all end and how? And is there not some better alternative?