Paying Tribute to Albert Maysles, a Humanitarian and the Godfather of Documentary

Kevin Gosztola
0 0
Paying Tribute to Albert Maysles, a Humanitarian and the Godfather of Documentary Kevin Gosztola 2015-03-07 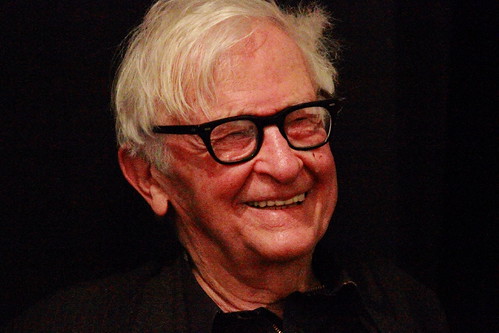 The godfather of documentary filmmaking, Albert Maysles, has died at the age of 88. He directed the well-known documentary classics Grey Gardens, Gimme Shelter and Salesman.

Maysles and his brother, David, pioneered cinema vérité or what is commonly known as truthful cinema. As a cinematographer and director, he sought to produce films that put viewers immediately into contact with what other people were experiencing—experiences that viewers would know nothing about if they had not seen the films.

At the Commonwealth Club of California in 2009, he talked for about an hour about filmmaking and shared his views about humanity and life. It’s worth revisiting much of what he said as the world that appreciated his films pays tribute to him.

He opened his talk by discussing peace. One thing that bothered him was that CNN had started a Military channel and he thought there should be a Peace channel. He was passionate about former Representative Dennis Kucinich’s idea that the United States government should have a Department of Peace.

Albert believed that film was a “way of bringing peace because it’s so easy to get into a war with another country when you don’t know who those people are.” He considered what might have happened if there was a film about a family in Iraq and how that might have helped prevent the atrocities that were committed.

His work was about life, happiness and illumination. He wanted to show the good in the world rather than only misery. He sought to humanize people, as he did in the 1950s when he went to Russia and filmed in mental hospitals. And as he did with Grey Gardens.

The film released in 1975 showed the lives of the Beales, two recluses, a mother and her daughter. They were both named Edith. They did not clean their home or cut the grass. They had many cats. But as Maysles told the Commonwealth Club they were in better health than their rich neighbors in East Hampton. They loved one another, did not watch television, would not get drunk and had a pretty good understanding of the world. And Albert embraced them because they were non-conformists.

Notoriously, New York Times reviewer Walter Goodman found the women and their “flabby flesh” to be “grotesque.” He penned a mean-spirited review that the Times published, where he accused the Maysles Brothers of exploiting the Beales. Little Edie wrote a letter to the Times in response.

Albert recalled how the Times never published it. He called the Arts & Leisure editor and asked if they received the letter. When Albert asked why it was not published, the editor replied, “Oh, no, she’s a schizophrenic.”

“Do we have categories of abilities or disabilities by which we disallow people from speaking their minds and responding to something in the paper? It’s crazy,” Albert added.

A number of critics truly believed the Beales were people who should not be filmed, however, Albert resented this idea that such people existed.

On his work on Gimme Shelter, which highlighted the end of The Rolling Stones’ 1969 US tour that ended with the free concert at Altamont in 1970. The concert became a tragedy as the Hell’s Angels, brought in to do security, kill 18-year-old Meredith Hunter as he is trying to make his way toward the stage. Hunter had a gun in his hand and was stabbed to death. And the film has developed a reputation as a presentation of the end of an era in counterculture.

Albert did not shy away from showing the truth of what happened and that transformed the documentary into something socially significant.

He was inspired by the work of Sigmund Freud and became a psychologist before he became a filmmaker. It served Albert well because he committed himself to never attempting to prove a point of view.

“If I discover along the way that my ideas were prejudices that I should’ve dropped, I drop them and go for what I discovered as I discover them,” Albert said.

He admired Italian neorealist filmmaking. The characters in those films came across as being real people and he strove for that in his films.

One project he committed himself to was teaching kids in Harlem, who were between the ages of 8 and 12, how to make videos. He said that some of his students would put their videos on DVDs and send them to their parents in prison.

Albert was no supporter of how America punish and incarcerates so many people. He spoke out against one federal law that apparently makes it possible to take children away from their mothers if their mothers have been in prison for more than 18 months. “Can you imagine anything more stupid for the child and for the parent?”

He was interested in bringing to life what it really meant to be poor so others could understand and empathize with them. He did this with his film, LaLee’s Kin: The Legacy of Cotton, which examined the legacy of slavery and sharecropping in the Mississippi Delta by highlighting the lives of a great-grandmother surviving poverty.

Albert filmed Fidel Castro and enjoyed shooting people in Cuba. He was with Fidel Castro in 1961 when he received a message that the State Department had broken off relations with the country.

He was the one of the best cinematographers to have working on a rock documentary and was involved in the production of DA Pennebaker’s excellent Monterey Pop.

Finally, there was a “dream film” he wanted to make, a train film, which he managed to film before he died. It is called “In Transit,” and in post-production now.

Albert boarded long-distance trains all over the world. For example, in one sequence he filmed on a train from California to New York, he found a nervous 26-year-old woman, who was in the coach section of the train. He found out she was three years-old when her parents had a terrible divorce. She had never seen her mother and had received a call in the last day from her mother, who told her to get on a train and she’d be waiting for her in Philadelphia.

He remembered capturing a moment where the daughter rushed to hug her mother and they embraced. The mother turned and said to him, “Isn’t she gorgeous?”

Critic Roger Ebert said, “Movies are the most powerful empathy machine in all the arts,” and, perhaps, nobody understood that as well as Albert Maysles. He left an indelible mark on cinema and his commitment to his craft, as well as his humanity, will forever be an inspiration to many.

As referenced heavily in this post, here’s Albert Maysles at the Commonwealth Club in 2009:

Paying Tribute to Albert Maysles, a Humanitarian and the Godfather of Documentary