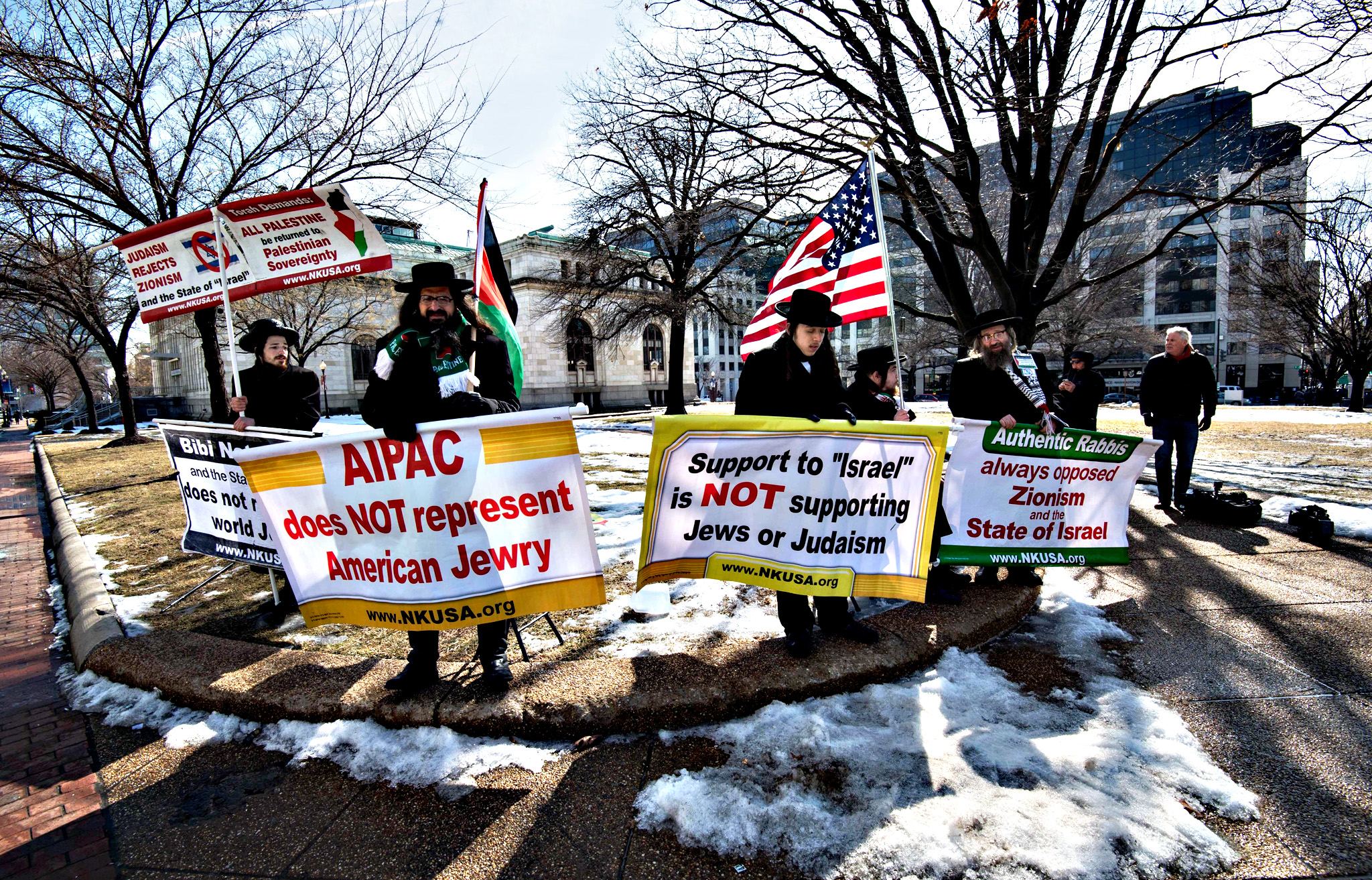 Dozens of demonstrators in New York braved driving snow on Sunday to protest the arrival of Israeli Prime Minister Benjamin Netanyahu to the United States.

“One of the issues we aim to raise awareness about is Israel’s impunity against international law through its unconditional support from the United States,” Hani Ghazi, the New York-area Israeli Apartheid Week (IAW) coordinator, told MintPress News before speaking at the rally. “Netanyahu’s speech perpetuates that complicity.”

Dozens blocked the doors to the convention center, many with gruesome Netanyahu masks and hands coated in fake blood. Five people were arrested.

Netanyahu is expected to speak at the AIPAC conference on Monday evening, then address a joint session of Congress on Tuesday. 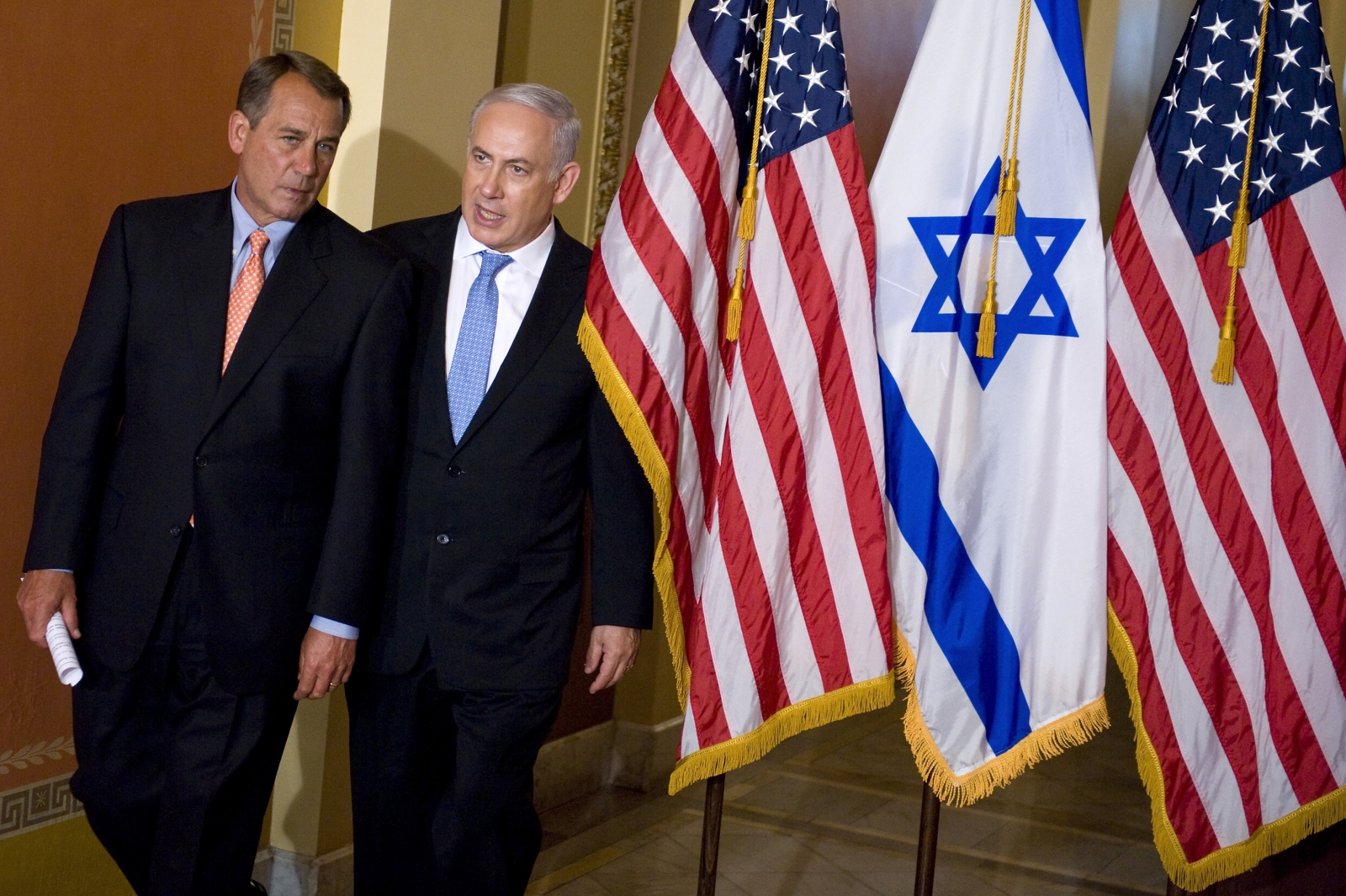 His appearance before Congress has drawn broad criticism from the Democratic Party because John Boehner, the Republican Speaker of the House of Representatives, who invited Netanyahu to address his chamber and the Senate, did not coordinate the appearance with President Barack Obama, a routine courtesy for official appearances by foreign heads of state.

Others oppose the announced content of Netanyahu’s speech to U.S. lawmakers: a call for new sanctions against Iran and a condemnation of the Obama administration’s efforts to reach a multilateral agreement with the country on its use of nuclear energy. The diplomatic initiative is a key project of Obama’s second term.

Some have criticized the appearance as an attempt to boost Netanyahu’s appeal to Israeli voters two weeks ahead of Israel’s parliamentary elections, scheduled for March 17.

At least 40 Democratic members of Congress, including four senators, have announced that they plan to skip the joint session after weeks of pressure grassroots pressure, including over 110,00 letters from constituents. Many frame their absence as an act of political protest.

“[A]t this time your invitation is contrary to the standards by which our Congress operates and has the potential to harm US Foreign policy,” Rep. Keith Ellison wrote in a public letter signed by 22 other Democratic members of Congress and sent to Boehner on Feb. 18.

The letter added that Netanyahu’s appearance “enlists a foreign leader to influence a Presidential policy initiative.”

“We strongly urge you to postpone this invitation until Israelis have cast their ballots and the deadline for diplomatic negotiations with Iran has passed,” it said.

Obama announced that he would refuse to meet Netanyahu so close to Israel’s election, as did Secretary of State John Kerry. Vice President Joe Biden pointedly sidestepped the issue by leaving the country for the duration of Netanyahu’s visit.

Kerry told a Congressional hearing on Wednesday that Netanyahu “may have a judgment that just may not be correct here.” This came the day after National Security Advisor Susan Rice called the visit “destructive of the fabric of the relationship” between the U.S. and Israel.

Even AIPAC, along with senior Israeli officials like Foreign Minister Avigdor Lieberman and military chief of staff Maj. Gen. Gadi Eizenkot, have warned that the stunt may damage U.S.-Israeli ties, as have opposition leaders across Israel’s political spectrum.

In an apparent rejoinder to the mounting criticism, Netanyahu last week refused an invitation from Sens. Dianne Feinstein and Dick Durbin to meet privately with Senate Democrats during his visit.

“His refusal to meet is disappointing to those of us who have stood by Israel for decades,” Sen. Dick Durbin said in a rare rebuke of an Israeli leader by a member of Congress.

Leveraging the wedge between the parties

Yet despite their opposition to Netanyahu, many of those protesting his arrival found little to celebrate in his war of words with the Democratic Party.

“Every U.S. administration, whether Republican or Democrat, has been for Israel, and for endless funds to Israel,” Sara Flounders, co-director of the International Action Center (IAC), told MintPress News.

The IAC, a New York-based activist group, was among two dozen organizations whose members and supporters gathered at Sunday’s rally in Manhattan.

“Is Obama threatened by this?” Flounders asked. “It’s an attack on a certain diplomatic initiative, by which Israel is very threatened. Is this really a big struggle between Republicans and Democrats? That’s always going on. However, both sides support Israel, support Zionism, and support U.S. dominance in the region.”

Even members of Congress who oppose Netanyahu’s speech, she said, “have made it very clear that they stand with Israel.”

Indeed, the 23 congressmen and women who signed the Ellison letter asserted, “Our relationship with Israel is too important to use as a pawn in political gamesmanship.”

Meanwhile, Anna Kaminski, protest coordinator for the women’s activist group CODEPINK, which has organized a series of demonstrations in Washington, including Sunday’s, took a more optimistic view of the partisan dispute.

“A wedge has been driven between Democrats and Republicans,” Kaminski told MintPress. “While it’s about politics, we can continue to push this.”

“It’s very clear that this is a moment,” she added. “We’re going after AIPAC, and it’s timely. There’s really no better time to push the issue of Israel/Palestine, demand justice and free Congress from the chains of the Israel lobby.”

“The invitation by the congressional Republican right wing for Netanyahu to speak was an effort to use him as a battering ram against the overwhelming sentiment in the U.S. today against another war,” she said.

AIPAC likewise hopes to push the U.S. into war, Kaminski said. “AIPAC continues to push for legislation against Iran and demonize them as a safe-haven for terrorism in the region, which is just not true.”

Flounders added that Netanyahu’s appearance in Congress aims to deflect attention from his role in the occupation of Palestine, focusing instead on the Israel’s threats against Iran.

“He is a war criminal, without a doubt,” she said. “Yet he’s not coming to address the question of Palestine. He’s coming to demand an escalation against Iran.”

Marking the beginning of the end?

The rally in New York raised both issues, as demonstrators ranging from Black Lives Matter activists and Neturei Karta rabbis, to members of Filipino, Haitian, Honduran, Pakistani, and Venezuelan community organizations, as well representatives from a range of Palestinian and Iranian groups, called for a comprehensive peace deal with Iran and an end to U.S. aid to Israel.

Protesters in Washington also sought to press each concern through their blockade of the AIPAC conference, Kaminski said.

“It’s about both. It’s about confronting the Israel lobby on everything they do. They continue working to drive us to war with Iran, which is not okay. At the same time, the Israel/Palestine issue is the crux of everything we do.”

Sunday’s demonstration outside the AIPAC conference, which followed the launch of the Washington mobilization through direct action trainings and a speaking event on the similarities between anti-colonial movements on Saturday, drew an estimated 400 participants, according to protest organizers.

“I’m guessing AIPAC had some kind of agreement with the police, who were rent-a-cops, not to arrest protesters,” Kaminski said. But the five arrestees, who attended a workshop on civil disobedience Saturday, were eventually hauled away, then charged with infractions and released. “They really wanted to be arrested.”

The New York demonstration came three days after the local kick-off to IAW, a global series of annual events organized in solidarity with Palestinians.

As IAW continues in New York, protests in Washington will last through two more days of the AIPAC conference, with demonstrations organized by the ANSWER Coalition and Jewish Voice for Peace, as well as CODEPINK, building toward Netanyahu’s address to Congress on Tuesday.

“We’re committed to confronting AIPAC and challenging the power of the Israel lobby,” Kaminski said. “It’s about making this the beginning of the end.”