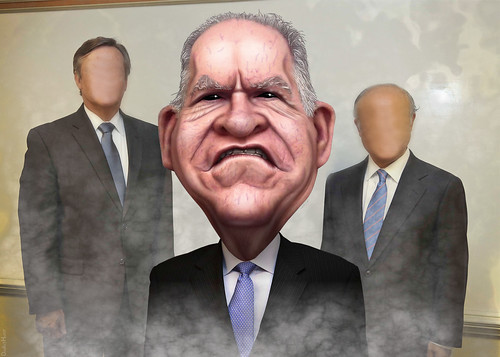 A federal judge dismissed a former CIA operative’s lawsuit alleging he was subject to a “hostile work environment” and discriminated against because of his disability and race. The judge decided the CIA had appropriately made a state secrets claim and there was no way to litigate the case without creating “substantial risk” to “national security.”

Although covered by Secrecy News’ Steven Aftergood, the case, which was dismissed on February 10, has received little to no media attention.

The outcome suggests there are an entire class of intelligence employees, who are foreclosed from bringing discrimination and workplace retaliation claims in United States courts. It also is another example of how excessive secrecy is used by government officials to block legal challenges to their authority.

“Jacob Abilt,” a pseudonym adopted “due to the sensitive nature” of his past job duties, is an African American, who was employed in the CIA’s National Clandestine Service as an Applications Director and Technical Operations Officer from May 2008 until he was fired in October 2011, according to the court order [PDF] dismissing the case.

When Abilt was hired, he informed the agency that he suffered from narcolepsy.

Abilt requested in 2009 that he be allowed to take “brief naps” at his desk, as he was experiencing symptoms of his disability. His supervisors agreed to allow him to nap as long as he accounted “for missing time by working through a lunch break or working beyond his scheduled tour of duty.” But Abilt claims his supervisors harassed him whenever they saw him napping.

By February 2011, superiors subjected Abilt to weekly progress reports and had him attend weekly meetings to discuss his work performance. Abilt believes these meetings were primarily used by his superiors to further harass him. They falsely accused him of letting his work fall below standards, and none of his other co-workers were subject to the same treatment.

Abilt further alleges that between February and July of that same year he was subject to a “continuous pattern of harassment calculated to lead to his termination.” He was confronted constantly with complaints from co-workers and supervisors would regularly communicate with him in a “demeaning manner.”

The former operative filed a formal complaint that alleged CIA supervisors discriminated against him. It was rejected. He appealed to the Equal Employment Opportunity Commission (EEOC), which rejected his complaint as well. Abilt then filed a federal lawsuit alleging disability and race discrimination in the Eastern District of Virginia.

Judge Gerald Bruce Lee fully agreed with the CIA and its director, John Brennan, that Abilt’s claims of mistreatment because of race and his narcolepsy could not go forward in court without “reasonably resulting in damage to the national security” of the United States.

The CIA could not defend itself without relying on “privileged information” and “further litigation” would “present an unjustifiable risk of disclosure of classified information.” For example:

…(a) the identities of CIA officers and employees, (b) the job titles, duties, work assignments of Plaintiff and other covert employees, and the criteria and reasons for making the work assignments and employment decisions regarding them, (c) sources and methods used by covert employees, including operational tradecraft and the identity of human assets; (d) the targets and focus of CIA’s intelligence collection and operations, and (e) the location of CIA covert facilities

Brennan argued in his affidavit to the court [PDF], “The facts of Mr. Abilt’s employment with the CIA are replete with classified information. For example, the specific National Clandestine Service operations on which he worked are classified. For the majority of his supervisors and coworkers, even the fact of their association with the CIA is classified.”

“The nature and description of the work that they performed is classified. In some instances, particularly when traveling overseas, the location and nature of the facilities in which they worked are classified. Any exploration therefore of Mr. Abilt’s employment, and that of his colleagues, will necessarily risk disclosure of highly sensitive classified details concerning the existence and nature of clandestine CIA collection programs and activities.”

Lee accepted that “performance standards” for Abilt’s position were “state secrets” that could jeopardize national security if disclosed.

The judge agreed that details about his “covert position” and his “performance evaluations,” along with “any evidence that would tend to rebut supervisors’ assessment of work performance” might put the “national security” of the US at risk.

The “performance standards” that co-workers have to follow and their evaluations, if disclosed, would risk substantial harm as well.

The case bears great similarity to the case of former African American CIA officer Jeffrey Sterling, who alleged discrimination in a lawsuit. The CIA invoked “state secrets” and requested it be dismissed. The case went all the way to the Supreme Court where the CIA ultimately prevailed.

Sterling was recently convicted of multiple violations of the Espionage Act and other offenses in the Eastern District. The jury believed the government that he had leaked information related to a top secret operation, which involved giving flawed nuclear blueprints to Iran. And, remarkably, in that case, the government used Sterling’s performance evaluation to persuade a jury to convict him.

Like Abilt’s case, Sterling’s performance reviews were “state secrets” when he wanted to sue the CIA for discrimination. However, when the government wanted these “state secrets” to prosecute Sterling, there was suddenly no potential risk to national security and they could be discussed in a courtroom and presented to a jury.

The “state secrets privilege” has its roots in a 1953 case known as United States v. Reynolds, where the United States government refused to tell victims’ families how their loved ones had died in a military plane crash because they contended “secrets” would be revealed. In recent years, it has become known through declassified Air Force documents that fraud was likely perpetrated [PDF] by the government in this case. The fraud essentially deprived victims of judgments in court.

As a petition that was filed by victims seeking compensation for being defrauded argued, “The government concealed its fraud for decades, holding the accident reports and witness statements as ‘classified materials’ until the 1990s, even though they contained no secrets and had no conceivable further utility. Indeed, that was the Air Force’s purpose in classifying them—to bury them so deep and so long that no one would find them.”

The CIA allowed a case involving an employee who alleged his constitutional rights were violated when he was fired for being homosexual. He was a clerk typist for the agency in the 1970s and later was promoted to an undercover position in 1980. But, since the early 2000s, the CIA and other intelligence agencies have adopted what amounts to a policy of pushing for dismissal of any employment suit on “state secrets” grounds.

Georgetown Law Professor Laura Donohue wrote a paper in 2010 [PDF] detailing the “state secrets” privilege, which included a brief history of its use in employment suits. Dr. Wen Ho Lee, a former US Department of Energy scientist who was accused of mishandling documents related to nuclear weapons, alleged slander in a defamation lawsuit. CIA director George Tenet stepped in to have it dismissed to protect “state secrets” in 2002.

A former employee of the US Army Tank-Automotive Armaments Command (TACOM) and his wife alleged they had been subject to ethnic and religious discrimination in a lawsuit filed in 1998. NSA director Keith Alexander invoked “state secrets” and the case was dismissed. Senator Carl Levin objected and wrote to the Pentagon, which investigated and found the employee, David Aaron Tenenbaum, had faced discrimination because of his relationship with an Israeli liaison officer.

In the cases of Abilt and Sterling, the courts accept the “state secrets” claims of the government wholesale and do not even bother to consider the ramifications of their orders, which could disproportionately impact employees of color.

The judges are not concerned with whether the former officers have a place to have their grievances heard and redressed. They accept, for example, that hearing the claims of someone mistreated for having narcolepsy will likely expose the agency’s most sensitive security operations and put lives at risk. Their treatment and termination may haunt them for the rest of their careers, but people like Abilt have no choice but to accept what amounts to a denial of due process.

Jeff Stein of Newsweek gave the dismissal of Abilt’s lawsuit a bit of coverage in his recent story, which reported that Abilt has filed a second lawsuit against the CIA. His story was published on February 21 and can be read here.