‘ALBUQUERQUE — A newly formed group called Red Nation, which consists of a group of American Indians and allies, will go to the City of Albuquerque’s city hall this coming Friday to demand the city to abolish Columbus Day. This action will coincide with Wounded Knee Liberation Day, February 27th, the anniversary of the takeover of Wounded Knee on the Pine Ridge Indian Reservation in 1973.

It was on February 27, 1973, the American Indian Movement, led by Dennis Banks, Clyde Bellecourt and Russell Means, and their allies staged an occupation at the Wounded Knee Massacre site in Pine Ridge, South Dakota to demand the recognition and protection of Indigenous rights. The occupation drew international attention. The siege lasted 71 days.’

“Columbus Day celebrates legacies of genocide and conquest of Indigenous Peoples of the Western Hemisphere,” states a news release distributed Saturday by the Red Nation.

“In 1997, United Nations NGO the International Indian treaty Council and the Committee on Racism, Racial Discrimination, Apartheid and Colonialism called for an end of the celebration of Columbus Day and declared instead the International Day of Solidarity and Mourning with Indigenous Peoples of the Americas. In 1990, the First Continental Conference on 500 Years of Indian Resistance called for the day to be changed to promote “unity” and “liberation.” In 1992, Berkeley, CA changed Columbus Day to a Day of Solidarity with Indigenous People. Four states do not celebrate Columbus Day (Alaska, Hawaii, Oregon, and South Dakota). In 2014 Minneapolis, Minnesota officially changed Columbus Day to Indigenous Peoples’ Day.

Albuquerque prides itself as an Indigenous cultural capital in the United States and America’s Southwest. Yet, it continues to celebrate Columbus Day, which is viewed by the international community, Indigenous Peoples, and allies as the day of the beginning of five centuries of genocide and dispossession in the Western Hemisphere. Indigenous peoples continue to be marginalized and exploited by racist holidays, mascots, imagery, and representation. By continuing to celebrate Columbus Day the City of Albuquerque contributes to the very palpable climate of racism against Indigenous people.

Other Indigenous groups and their allies are, and have been, demanding the same: #AbolishColumbusDay

From Howard Zinn (via Wikipedia) explaining why Columbus was so lionized by the Manifest Destiny True Believer Colonizers and their allies :

‘Now, from his base on Haiti, Columbus sent expedition after expedition into the interior. They found no gold fields, but had to fill up the ships returning to Spain with some kind of dividend. In the year 1495, they went on a great slave raid, rounded up fifteen hundred Arawak men, women, and children, put them in pens guarded by Spaniards and dogs, then picked the five hundred best specimens to load onto ships. Of those five hundred, two hundred died en route. The rest arrived alive in Spain and were put up for sale by the archdeacon of the town, who reported that, although the slaves were “naked as the day they were born,” they showed “no more embarrassment than animals.” Columbus later wrote: “Let us in the name of the Holy Trinity go on sending all the slaves that can be sold.” 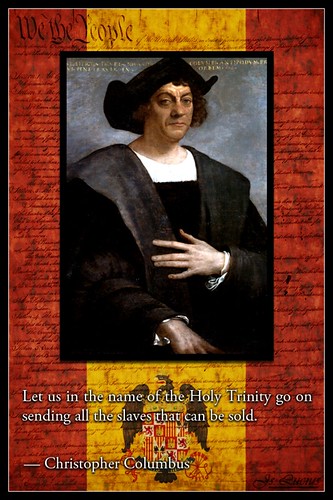 ‘But too many of the slaves died in captivity. And so Columbus, desperate to pay back dividends to those who had invested, had to make good his promise to fill the ships with gold. In the province of Cicao on Haiti, where he and his men imagined huge gold fields to exist, they ordered all persons fourteen years or older to collect a certain quantity of gold every three months. When they brought it, they were given copper tokens to hang around their necks. American Indians found without a copper token had their hands cut off and bled to death.’

Reformed Dominican Friar Bartolomé de las Casas chronicled the genocide, torture, enslavement, and other atrocities of the Arawaks and other West Indian indigenous committed by the Spanish, including having tested the sharpness of their knives and sword by slicing bits of their bodies off. In all fairness, he eventually advocated for a more ethical colonization of the Indigenous.

Nativenewsonline.org gave a very brief explanation of why they’ve chosen the 24th anniversary of the occupation of Wounded Knee to issue their demand, but the occupation came on the heels of a reign of terror (and I use the term advisedly) on the Pine Ridge Reservation. Then tribal chairman Dickie Wilson had commandeered the tribal police, added his own vigilantes, and they waged war against the tradtional Lakota and others who were incensed by his administraton’s corruption and malfeasance, selling off tribal mineral rights and other resources for their own profit. You can read more in Peter Matthiessen’s In the Spirit of Crazy Horse (‘The story of Leonard Peltier and the FBI‘s war on the American Indian Movement’), or even watch Robert Redford’s Incident at Oglala. BayAreaIntifada has a brief synopsis, as well as awesome iconic photos; SiouxMe’s page is dark, thus a bit hard to read, but delves into events a bit more deeply.

Concerning AIM’s and the Red Nation’s objections to First American sports logos as contributing to the age-old myths that even now allow them to be fodder for oppression, marginalization, broken treaties, and criminal disregard, consider this snippet that Wikipedia attributes to Michael Berliner of the Ayn Rand Institute, who claimed: 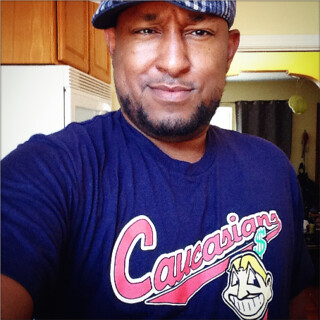 “… that Western civilization brought “reason, science, self-reliance, individualism, ambition, and productive achievement” to a people who were based in “primitivism, mysticism, and collectivism“, and to a land that was “sparsely inhabited, unused, and underdeveloped.”

On the right is Elon James White’ new Twitter avatar dressed in the now de rigueur T-shirt for those who despise ‘the honor’ that sports teams have paid the Indigenous of Turtle Island. Elon James is the editor of This Week in Blackness (TWIB Nation radio broadcasts).

‘The Native American Headdress is NOT a fashion statement’ is a lighter look at the issue, and it’s a mere minute and eighteen seconds. 🙂

Leonard Peltier was wrongfully convicted of the 1975 murder of the two FBI agents during the dark days at Pine Ridge; he has spent over 39 years in various prisons, and has been suffering serious health issues, even though various courts admit that there were many examples of prosecutorial malfeasance during the trial (read: railroaded). The most recent campaign asking Barack Obama to free him has been going on for several months, but no President has ever seen fit to free him (‘Someone must pay‘ is the usual rationalization). This video is from the ‘Leonard Peltier “I Will” Clemency Campaign’. One petition is here.

In order to not make this post too long to read, I’ll resist bringing Tweets and information from #NativeLivesMatter except for this op-ed from Johnnie Jae: ‘#Native Lives Matter: It’s a Different Kind of Hurt’, in which she says that interrupting the conversations with #AllLivesMatter highlights distracts from the lives that Latinos, blacks, and Native Americans experience every day. On a different post I’ll bring more from the Turtle Island indigenous; there’s a lot to bring.

And just to drive home the point that this is a stolen land, and the vast majority of us here are squatters. Bruce Cockburn sings it right in this non-embeddable video.  (the link will open in  new tab)

Updated with Twitterpics from the event; even with snowy weather, their Facebook page says that over 70 dedicated activists showed up.  Good on them!

Thanks for the support at the #abolishcolumbusday rally and Wounded Knee Liberation Day! #ABQ is stolen Native land. pic.twitter.com/WF59jMypbP

It is time to stand up against Indigenous oppression and the force is in motion pic.twitter.com/6wydTKaCSi