Abu Ghraib and the Hebdo Cartoons

Recently I’d bumped into this documentary produced by Javed Khan Dawlatzai, featuring commentary by former ACLU attorney Amrit Singh, now a human rights lawyer for the National Security and Counterterrorism program at the Open Society Justice Initiative.  It includes (at the time) new photos and short videos of torture inside Abu Ghraib prison.  The web page that featured it included articles by one of my all-time favorite journalists, Seymour Hersh.  More on that later.

For now, I’ll simply invite you to spend thirty-two hideous minutes watching more of what is often said to be: “in our names”, and then you might see more clearly why I’ll present a brief thesis about those ‘satirical cartoons’.

If you need to take breaks from the evil committed upon so many Muslims by those ‘few bad apples’, I’ll understand, as it was so for me.  By my third viewing, the impact was only slightly lessened; some images will remain seared into our minds forever, as they should be for any human being with a conscience and moral compass.

(Warning: you may not want to read the comments below the video on youtube; it really brought the snakes out from under their rocks.) 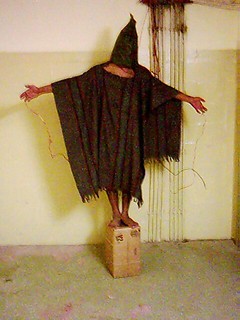 You will hear interviews with alleged ‘survivors’ of Abu Ghraib, and hear from family members, including the man who was in the iconic photo, hooded, arms held away from his body, with wires attached to batteries or some other form of electricity:

Ali Shallal al-Qaisi  (Haj Ali): “It just felt my eyes were popping out.  Am I a light bulb?  A human being?”

From the daughter of a man murdered at the prison within five hours of his ‘arrest’: “They say Muslims are the terrorists.  These are the terrorists”, while pointing at photographic evidence of sexual and other sadistic torture evidence.

Amrit Singh is no doubt glad that she left the ACLU before reading the executive director’s arcane and twisted reasoning behind Romero’s NYTimes op-ed ‘Pardon Bush and Those Who Tortured’.  Yes, their organization is still fighting for the release of many more photos and videos, and the buzz is that more may be released soon if Judge Hellerstein has anything to say about it.  ‘Published’ is a whole different matter, of course.

Sy Hersh said that there are far worse than we might even begin to imagine; Failuretolisten.com has bolded some of his quotes; again, clicking the link may bring even more terrible nightmares.

It wasn’t until having partaken of all of this that I chose to search out people who were resisting the ‘Je suis Charlie’ rubbish, especially given that so many news cycles were being eaten up by HebdoHebdoHebdo news, rallies, commentary denouncing extremist Muslims, insanely ubiquitous obligatory op-eds online, not to mention #CharlieHebdo.

Now I’d seen a few people I respected Tweet some of the funnies’, saying to the effect: “If you don’t Tweet these cartoons, then you don’t believe in Free Speech”.

Yes, I’d glanced at some, but I hadn’t really seen them, if you follow my drift.  But once I had, it seemed that some of the images so closely paralleled the impetus behind the vulgar, morbid, and Islamaphobic degradation and sexual humiliation of Muslin beliefs that I wanted to wretch.

Yes, I’ll also give the obligatory “The cartoons should not have led to killing, by any means” sentence; killing is just plain wrong and immoral.  But what the cartoons allowed me to see was that they are (wittlingly or not) part and parcel of the White Supremacist Empire’s endless War on Terror, and that they are not satirical, but sadistic.  Satire, as we should be aware, is to be aimed either at oneself in jest, or more meaningfully, at those in power with whom we heartily disagree, and whose power we wish to diminish with our satirical lampooning.

Muslims do not qualify, and arguably have been the most marginalized, poor, castigated, occupied, colonized, and vilified, shock-and-awed, drone assassinated, CIA regime-changed people on the planet by the US Empire and its Western client states ever over the past hundred years or more.

No, Bill Maher: whining ““Why are they so touchy? How come those backward Muslims can’t separate their religion from politics?”

‘If you actually want to understand why some fraction of Muslims saw gratuitous insult instead of satire when the French magazine Charlie Hebdo depicted the prophet Muhammad doing things you wouldn’t want your own small children to see, or pregnant Muslims as “Boko Haram sex slaves” howling for welfare checks, all you’ve got to do is look at is two bits of history. Philospher Karen Armstrong, in her latest book Religion and the History of Political Violence, goes a long way to break it down.

The first bit of history Armstrong explains, is that the notion of religion as a set of practices and beliefs about the diety you can perform on Sundays separate from how you put together political and economic life is an exclusively Western concept that nobody on earth before 17th and 18th century Europeans would recognize at all. The Sanskrit, Jewish, Arabic and other old terms for “religion” all mean something that recognizes no separation between politics, economics and morality and moral life.

It took more than a century of warfare in the 1600s and 1700s at a cost of hundreds of thousands of lives to establish a kind of religion in Europe which could be separated from politics and economics. That way Europeans could have slavery and capitalism. European ruling elites could exterminate tens of millions in history’s greatest genocide colonizing the New World and still call themselves Christians. Non-European Muslims are being allowed only a generation or two and fortunately a lot less bloodshed to make this transition to “modernity,” which brings us to Armstrong’s second bit of relevant history.’  (and so on; More Dixon and Armstrong here)

Gratuitous images of the racist and salacious not-so-har har kind: “The Koran Doesn’t Stop Bullets; This Thing’s Shit”’ or “A Star Is Born”, for instance. The documentary doesn’t show photos of guards ‘relieving themselves’ on Korans, but we know that it happened.

How many millions marched in Paris with ‘Je Suis Charlie’ signs?  And which world leaders were at the head of the parade?  Think: NATO, colonizers, and friends, with a few people of color joining them.  At least Obama wasn’t hypocritical enough to attend… (and yes, I know the End of the story featuring Lurch Kerry’s flowers).  Oh, and of course Bibi Netenyahu was with them.  But let’s kick it up a notch shall we, and believe in new scares about ‘the Lone Wolf Terrorist’; good for the DHS and Police budgets, Extreme Policing, if nothing else.

Please understand that the Funnies aren’t so Funny to Muslims, and why that might be so.  The are acting as weaponized propaganda cartoons, as far as I’m concerned.

Cripes, the #CharlieHebdo account is still cookin’ today, and this is hilariously hypocritical, considering:

Yes, ‘satirizing’ the Muslims is Fine Free Speech, but don’t touch French Jews!  My guess is that the “Je Suis Dieudonné” parades will be rather scantily attended, wouldn’t you think?

At last count Muslims represent 7.5% of the population in France, but 60% of the prison population.  Remind you of any other nation, perhaps?  #MuslimLivesMatter.  Ah; and Yves Smith’s new #GreekLivesMatter, as well.  Solidarity!

I collected plenty of links that demonstrate that not all writers are down with: “Don’t curtail Free Speech” political correctness re: Hebdo, but one I found particularly poignant as she also mentions…Abu Ghraib.  Meet poet Shailja Patel.  She writes first of cartoons that are funny…unless so-and-so; then:

‘Cartoons of the Prophet Mohammed naked, on all fours, anus presented as target, are anti-clerical snigger fodder. Unless you and half the men and boys and boy children and baby boys you know and love are named Mohammed.

Unless you and your brothers, cousins, fathers, sons, friends are at daily risk of random causeless stop-and-frisks, patdown-gropes, strip-searches, cavity-searches inside Enlightened Fortress Europe. Because they can.

Unless your grandfather Mohammed was raped and castrated by the French in their concentration camps in Algeria.

Unless your mother survives daily harassment and threats of violence by Front National thugs in her banlieue by invoking the mercy of the Prophet on the ignorant.

Unless all the naked bodies in the Abu Ghraib torture photos look like you. Naked prone men, trailing blood, dragged on leashes by grinning US soldiers. Naked men piled in flesh sculptures by thumbs-up flashing, beaming young GIs. Naked brown Mohammed buttocks branded with cigarette burns like pointillist skin canvases. Mohammeds hooded and wired, bleeding from mouth and ears and anus, as their torturers laugh and strike poses. Naked violated men who look like you, like your brother, like your father, like the man your sweet baby boy will grow up to be.

Unless your little sister came home sobbing last week and screamed she would never go back to school, the school your parents dreamed for her before she was born. It took hours of coaxing and comforting to elicit why. The bully who makes her schooldays hell found a delicious new cruelty, one that follows her beyond school like an electronic ankle tag. He put that cartoon up on the classroom whiteboard, and the teacher left it there all day as a lesson in free speech.’

Thank you, Shailja, for being a sane and articulate voice for those of us who share your sentiments.  May our voices ring out, knowing that our ‘separateness’ from our brothers and sisters around the globe, that so many see as ‘The Other’ for their own socio-political purposes…are an illusion we must guard against.

*And may I never again need to type HebdoHebdoHebo or ever type ISILISILISIL.

Abu Ghraib and the Hebdo Cartoons