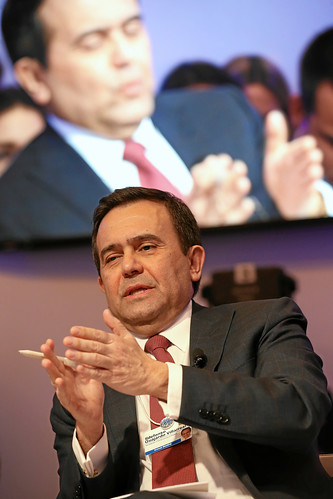 On January 23, at the World Economic Forum in Davos, Switzerland, Villarreal said Mexico would “replace Venezuelan oil.” Indeed, he noted, in spite of the drop in oil prices, Mexico was a great investment for oil and gas companies:

[F]or companies in deep-waters, in mature wells, in the new technologies of shale gas, Mexico is still a great opportunity,

Villarreal makes these comments after the Mexican government decided to privatize its state-run energy company two years ago. Oil and gas was under a monopoly through PEMEX (short for Petroleos Mexicanos) but lawmakers decided to break it up.

The economics secretary admitted low oil prices might slow down extraction from some deep waters but said there was profit to be made as other areas were cheap for companies.

“There is a lot of interest in what at this moment is definitely something with high profitability,” Villarreal additionally declared.

These comments reflect the country’s determination to increase its exports as energy companies look to enter “round one” of bids for locations in the Gulf of Mexico. Talks are set to involve major oil companies such as Chevron and ExxonMobil despite the drop in oil prices, which is now less than $50 per barrel.

What drives this is mentioned in a report last year by the Atlantic Council, an industry think-tank notable for receiving financial support from Chevron and ExxonMobil.

The report was titled “Mexico’s Energy Reform: Ready to Launch” and focused on the “energy renaissance” in Mexico:

The fundamental obstacle to Mexican energy development was mustering the political will to allow the country access to the expertise, technology, and capital needed to open new energy frontiers. Mexico’s leaders have now decisively found the will to reform and passed a set of laws that can transform Mexico into a major energy and industrial power.

The report praises the “political bravery” of Mexican President Enrique Pena Nieto, noted as unpopular in the country, for allowing the change.

It suggested PEMEX’s “[oil] production is comparable to that of Chevron,” which makes the reform so valuable. It also asserted how PEMEX will still hold a level of control yet new companies would “partner with PEMEX to ease public acceptance.”

One of the report authors was David Goldwyn, a former Obama administration official with a history of defending oil and natural gas companies. [Investigative journalist for DeSmogBlog Steve Horn documented Goldwyn’s efforts throughout his career of promoting private interests.]

The second author of the report is Neil Robert Brown, who works under Goldwyn at Goldwyn Global Strategies. Moreover, Brown worked under former Indiana Senator Richard Lugar, a Republican who introduced a bill in 2012 calling for the U.S. use liquefied natural gas exports to counter Russian gas in Europe.

Both Goldwyn and Brown wrote an article highlighting the decision to break up PEMEX as “remarkable” and good for U.S. interests:

Success would deliver renewal of domestically driven growth for Mexico and contribute to the emerging success story of North America. As a neighbor with deep cultural and economic ties, we in the U.S. have a profound interest in seeing the Mexican miracle succeed.

Megan Reilly Cayten, the other co-author of the report, co-wrote an op-ed with a BP official in 2012 for Washington Post advocating for the U.S. to work with Cuba to drill for oil. Cayten blamed federal regulators for the Deepwater Horizon spill:

However, it is well-documented BP was careless before the spill and refused to follow the advice of regulators.

The report written by the three neglects to mention fraud and abuse taking place at PEMEX to the point where regulators refuse to take action. In addition, in spite of the claims of prosperity, PEMEX already fired at least 10,000 workers no doubt in response to the drop in oil prices.

What Villarreal said still matters considering Venezuela, in spite of support among citizens, is struggling as a result of low oil prices.

Poverty from 2012 to 2013 rose not only among the general population, but the indigenous as well. As Ryan Mallett-Outtrim of Venezuelan Analysis wrote on the issue of a stable currency and economy:

From here until the visible horizon line, that Goldilocks moment for bold reforms just isn’t visible. If inflation, scarcity and speculation don’t slow, major currency reforms will never get any less painful than they would be today.

Such a statement by a Mexican official puts Mexico and Venezuela relations in jeopardy.

Mexico will likely seek to take advantage of the global free-for-all with eager oil companies ready to strike. This may mean Venezuela will have one less ally in Latin America.