How Torture Wins In the US Marketplace of Ideas

Over two thirds of Christians support the torture of terrorist suspects.

How did this happen? How did actions considered morally repugnant and war crimes in World War II, become acceptable now? And by Christians, goddamnit! Who made this happen, who let this happen, who helped it happen? And finally, is there a way to change this opinion?

My friend Dr. Rebecca Gordon, goes into detail on some of these questions in her book Mainstreaming Torture, but recently I saw a TV show and heard a radio program that illustrated how some of it happened. It took a mix of secrecy, rhetorical tricks and proactive marketing to make torture become acceptable in the US.

First I watched a tv series set in 1962 in a slightly different America. Here’s the opening scene:

Fade in: Two men are watching a color newsreel in an elegant theatre. The title reads, “A New Day in America.” We see images of smiling workers in factories, farms and office settings. The announcer says, “Everyone has a job, everyone knows the part they play keeping our country strong.” he adds, “but our greatest days lie ahead.”

In the seats a note is handed off. As one of the men leaves he is silhouetted by the American flag flying on the screen. As the flag unfurls you see the stars have been replaced by a white swastika on a blue background. The announcer ends with, “Sieg Heil.”

This is the opening scene from the new Amazon TV series “The Man in the High Castle.” (The first episode is free.)

In this alternative history, based on the Phillip K. Dick book, the Nazi’s won World War II, the US is split between the Japanese in the west and the Nazi’s in the east.

In this timeline Hitler wasn’t defeated. The Nuremberg Trials never happened. The atrocities committed by one group of humans on another were never revealed, condemned or punished.

Additionally, the ideas behind the justification and need for torture weren’t discredited, nor were the people who suggested them. This also means the people who provided the intellectual, legal, moral or religious foundation for torture, genocide and other war crimes were not repudiated.

Imagine a United States in which the people who provided the justification for torture weren’t discredited, shunned or marginalized by their various communities.

In the show it’s fifteen years after World War II. What do people normally do after a war? They go on with their lives. Some go back to academia, others to law firms or into government positions as “senior advisers.”

Christian religious leaders go back to their churches to give Sunday sermons about the Bible and the New Testament.

People write books, become pundits and experts in their field. They talk to the media, go on talk shows to plug their latest books and go on the speaking circuit to explain how they won the war.

In this alt-US, do they allow some dissension, or do they attack, smear and jail people who try to reveal the whole story?

We often hear this question, “How could Germans gone along with the atrocities that were happening?” Lots of answers.

Who’s Selling Torture In the Marketplace Of Ideas?

Which leads me to the radio program I heard, Does Mass Phone Data Collection Violate The 4th Amendment? It was a debate hosted by Intelligence Squared with John Yoo arguing that mass phone data colletion does NOT violate the 4th Amendment.

Yoo is introduced as “controversial” by ABC correspondent John Donvan. Yoo makes a few jokes about Berkeley liberals, the audience laughs and claps and it’s off to the races.

The intro reminded me of a guest on the Tonight Show offering up a funny story before he sets up the clip from his latest fish-out-of water buddy film.

Spoiler Alert! Yoo’s side lost. The audience’s minds were changed.

After watching the debate I thought about all the people who promoted and are still promoting Yoo and his ideas vs those who challenged them. Conservatives love to talk about winning in the “Marketplace of Ideas.” I laugh when I hear this. It reminds me of the sales people I knew who would half jokingly say, “All I want is an unfair advantage.”

The pro-torture forces look for venues where they have an unfair advantage like one sided “debates” where they control the microphone or use strawmen instead of guests.

They want to talk to people and venues they can control via fear and rhetoric. For example, Dick Cheney on Meet the Press talking to Chuck Todd about torture. Todd wasn’t going to really push Cheney, he might be seen to have an option, or worse, risk Cheney not coming on the show again.

(BTW, listen to this great clip from the Jimmy Dore Show where Todd admits if he “barks” at guests they won’t come back on the show. Audio clip, starts at 24:45 )

If Todd and the rest of the corporate media aren’t going to challenge these ideas can we get them to book an anti-Dick Cheney to go on shows and challenge him?

When only the sellers of torture are being bought by the media as public the best guests and leading experts, we get an United States like in The Man in the High Castle. We have won the war but lost the values that we believed made us special.

Is this our flag? 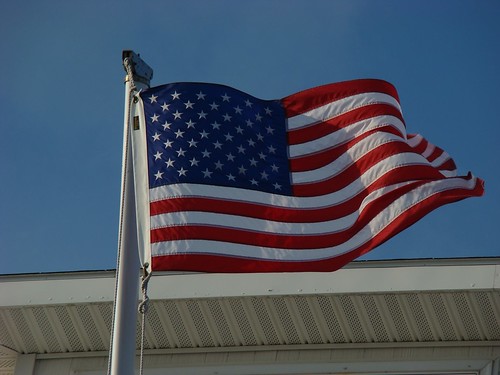 Or is it really this flag? What are our current values? Next, what will it take to change this opinion? Who will do it? Will anyone pay for doing it in the marketplace of ideas? Or should we just accept Dick Cheney’s reality has won and move on?? What are our current values?

How Torture Wins In the US Marketplace of Ideas