First I’d like to offer sincere props to the brave and committed anti-police brutality activists who have risked so much with their relentless pressure by way of civil disobedience in order to stop the killings by APD cops and change the culture of the most lethal cops by far in the nation. Without their dedication and superior strategies, almost nothing would be known by the public, and certainly nothing would have changed for the better. And yet, the APD went without killing anyone for six months until the most recent three last week. The nation is watching now, and we have them to thank. The City PTB must be uncomfortable as hell with the public now knowing how much money they’ve had to pay out in wrongful death claims and for the implementation of the DoJ’s consent decree after being forced into the initial investigations due to rampant citizen complaints. Well done, all of you!

Now on to the new story the world is watching:

On January 12 Bernalillo County District Attorney Kari Brandenburg charged former APD Officer Keith Sandy and SWAT team member Dominique Perez with murder in the assassination of James Boyd. Boyd, you’ll remember, was the schizophrenic homeless man who was camped out in the foothills above Albuquerque when he was shot dead by police on March 16. He was turning away from the cops and picking up some of his bundles as they’d demanded, when first, the K-9 unit, then the cops attacked him with taser and beanbag rifles, then loaded bullets into him. As far as I can tell from the video, he’d first pulled two small knives out of his pockets in fear of the crazed dog’s aggression. You can watch it here; I won’t embed it again. Note that after they hit him with a few more beanbag rounds, they let the dog declare him dead first. My rage boileth over…again. 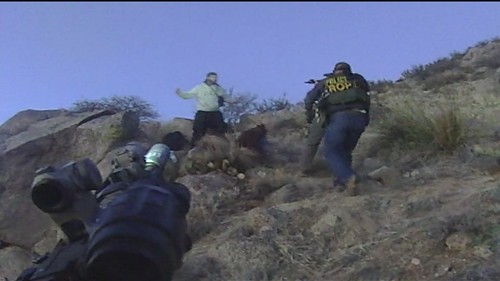 This link will take you to the dashcam recording (Oopsie) of former Peace Officer Sandy telling another cop that he would ‘shoot that ‘fuckin’ lunatic in the penis with a shotgun’ just two hours before they gunned him down like a rabid animal.

Now Kari Brandenburg has been in office since 2001, and that since that time, the APD has killed 46 people, and 28 since 2010. This is first time she has ever charged any APD cop (thus allowing total exemption in 45 others), apparently finally yielding to public pressure, especially as the case would seem to be a slam-dunk for any sentient being, including the Judge the DA will appear before in the arraignment phase. But we know only too well how that often goes…

Now detractors and the defense attorneys for the cops are claiming that Brandenburg’s motivation to file murder charges was due to the fact that she was being investigated for ‘witness bribery’ in a case involving her adopted son who is addicted to drugs. There was apparently a four-month hiatus in the investigation that was revved up again recently. Payback? KRQENews has discovered recordings (video and later, audio tapes included) that indicate they’ve essentially… got nothin’: ‘Detective David Nix: Case against Brandenburg is ‘weak,’ ‘but it’s gonna destroy a career’. It’s sordid as hell, and quite damning, including the fact that Keith Sandy worked on ‘the investigation’. (A tip of the hat to Max Blumenthal and his storify by Tweet of this national Police Scandal, which is where I discovered the KRQE report.) {more}