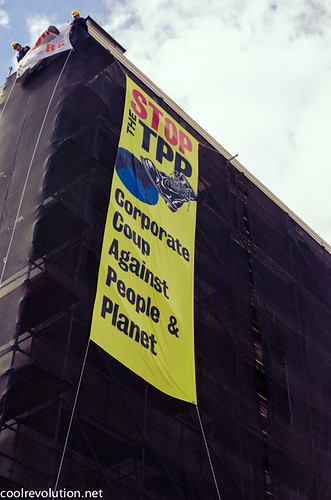 Medeiros was at the Brookings Institute for an event and was asked about President Barack Obama’s reference to the free trade agreement during his State of the Union address. Medeiros said the U.S. was “confident” the agreement can be completed this year:

The U.S. is, I think, in the end game of its negotiations with its TPP partners about what needs to be completed, both the market access component and the rules making component. The fact that the president has now requested [it] from Congress is a political statement that the goal is to get it completed in 2015

The only hang-up Medeiros said was getting Japan on board, although he thinks they would eventually join in spite of difficulties. He also said China may enter the agreement as it could cause positive “structural changes” to their economy.

Medeiros is in charge of Asian affairs at the National Security Council, which assists the President “on national security and foreign policies.”

Previously, he worked at the RAND Corporation, a think-tank that advises clients on national security-related issues.

As noted yesterday, the TPP carries enormous consequences from issues like the environmental all the way to economics.

In terms of the environment, for instance, Public Citizen notes there would be privileges corporations would gain at the expense of nature, which include:

The motive of the agreement can be found in a fact sheet released by the Obama administration in 2011:

The TPP is a key element of the Obama Administration strategy to make U.S. engagement in the Asia-Pacific region a top priority.   The huge and growing markets of the Asia-Pacific already are key destinations for U.S. manufactured goods, agricultural products, and services suppliers.  As a group, TPP countries are the fourth largest goods and services export market of the United States.

Before President Obama took office, there was worry the U.S. lost its focus on Asia, especially with the rise of China.

Obama told the Australian parliament, “As a Pacific nation, the United States will play a larger and long-term role in shaping this region and its future, by upholding core principles and in close partnership with our allies and friends.”

In 2009, former Secretary of State Hillary Clinton told reporters in Thailand the U.S. was back in Asia.

The TPP accomplishes that as efforts have been conducted for months through deals so secret members of Congress cannot publicly discuss them.

Representative Alan Grayson (D-FL) has said such secrecy is strange and called it an “assault on democratic government.”

Whatever the case may be, the TPP is something the Obama administration hopes to accomplish soon without any spotlight on the process. The name was not even explicitly said by Obama on Tuesday, but this reveals how much the administration wants negotiations to be quiet.