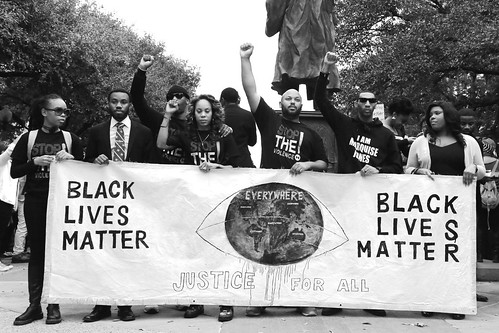 A new grassroots movement against institutional racism sparked by events in Ferguson, Missouri, has rekindled discussion about the legacy of Dr. Martin Luther King Jr.

Co-founders of Black Lives Matter describe the effort to “Reclaim MLK.” Individuals around the world over the last few days have been “engaging in radical acts of civil disobedience, by bringing our visions and our dreams and the needs of our communities to the halls of power across the country, by doing teach-ins about the social and economic issues that, when resolved through social and legislative action and by connecting climate change, gentrification, poverty and economic inequality—thereby further illuminating the dream of Black Lives Matter.”

Together, they recall that King recognized, “Whatever affects one directly, affects all indirectly. I can never be what I ought to be until you are what you ought to be. This is the interrelated structure of reality.” This has inspired the movement that has emerged to connect “social ills” and reject “compromise and respectability politics of the past.” It has pushed the movement to open up a “new political space for radical visions of what this nation can truly become.”

The federal government’s response to this movement has been similar to the response of President John F. Kennedy and President Lyndon B. Johnson to the civil rights movement. It continues to believe it can triage and neutralize a movement that is gaining momentum as it move towards upending the status quo.

President Barack Obama has appointed a “task force” that will reportedly examine trust between police and “minority communities.” And, Vice President Joe Biden, at a breakfast in Wilmington, Delaware, stated this morning, “We need to agree in this nation on two basic statements of truth. Cops have a right to go home at night to see their families. And two, all minorities, no matter what their neighborhood, have a right to be treated with respect and with dignity. All life matters.”

Such a statement promotes a false equivalency between the bleating of cops and the grievances of minorities. It suggests there is some group with some legitimacy in this struggle, which believes that cops do not have a right to go home to their families every night. It amplifies this talking point, which aims to distract from the core injustices in the relationship between police and communities impacted by racist policing.

It overlooks the statistical reality. A report from the National Law Enforcement Officers Memorial Fund [PDF] shows that “law enforcement fatalities” have actually decreased by about fifty percent since 1999. There were 126 officers who “died in the line of duty” in 2014. On the other hand, well over 1,000 people were killed by police officers last year; the majority were minorities.

The remark by Biden also showcases the deliberate ignorance of power. On Martin Luther King Jr. Day, of all days, Biden thinks he can speak from a position of power and tell people at the grassroots level what they need to learn. It should be the other way around. Biden should be reflecting on what people at the lowest levels, through their struggle, have taught him over the past year. He should be acknowledging the struggle of those who are fighting to be heard.

Howard Zinn in A People’s History of the United States reflected on the elite’s attempts to use the march on Washington to bring blacks into a democratic coalition that President John F. Kennedy could more easily control.

…[I]t did not work. The blacks could not be easily brought into ‘the democratic coalition’ when bombs kept exploding in churches, when new ‘civil rights’ laws did not change the root condition of black people. In the spring of 1963, the rate of unemployment for whites was 4.8 percent. For nonwhites, it was 12.1 percent. According to government estimates, one-fifth of the white population was below the poverty line, and one-half of the black population was below that line. The civil rights bills emphasized voting, but voting was not a fundamental solution to racism or poverty. In Harlem, blacks who had voted for years still lived in rat-infested slums…

The economic disparity has remained constant since the civil rights movement of the 1960s. “In the 42-year period during which the Bureau of Labor Statistics has separated out unemployment data into different races,” according to the Washington Post‘s Philip Bump, “black unemployment has always been higher than white unemployment.” In August 2014, the unemployment rate was 11.4 percent while unemployment for whites was 5.3 percent.

A half century ago, as Zinn additionally recounts, “There were black outbreaks in every part of the country: in Florida, set off by the killing of a Negro woman and a bomb threat against a Negro high school; in Cleveland, set off by the killing of a white minister who sat in the path of a bulldozer to protest discrimination against blacks in construction work; in New York, set off by the fatal shooting of a fifteen year-old Negro boy during a fight with an off-duty policeman. There were riots also in Rochester, Jersey City, Chicago [and] Philadelphia.”

In 2014, not only did Officer Darren Wilson kill an unarmed black teenager, Michael Brown, in Ferguson, but New York police officer Daniel Pantaleo put a black father, Eric Garner, and choked him to death as he cried out, “I can’t breathe!” Tamir Rice, a 12-year-old black boy, was the victim of a homicide by Cleveland police; John Crawford, a 22-year-old black man, was gunned down in a Wal-Mart in Ohio by a police officer. These deaths fueled outbreaks of protest all over the country.

What’s remarkable in comparison to the present-day is that there were uprisings in cities for the next couple of years. Eventually, a commission called the National Advisory Committee on Urban Disorders examined what was happening and found that a “typical rioter” was often “proud of his race, extremely hostile to whites and middle-class Negroes and, although informed about politics, highly distrustful of the political system.”

“White racism” was blamed by the commission for the disorder:

…Pervasive discrimination and segregation in employment, education and housing…growing concentrations of impoverished Negroes in our major cities, creating a growing crisis of deteriorating facilities and services and unmet human needs…

A new mood has sprung up among Negroes, particularly the young, in which self-esteem and enhanced racial pride are replacing apathy and submission to the “system.”

Resistance to police is once again bringing about a mood that drowns apathy and urges everyone to no longer submit to systemic racism.

In 1965, King wrote about Selma in an essay for The Nation. And, like many of his words, what he had to say takes on even greater resonance given the rise of the Black Lives Matter movement.

…Selma involves more than disenfranchisement. Its inner texture reveals overt and covert forms of terror and intimidation–that uniquely Southern form of existence for Negroes in which life is a constant state of acute defensiveness and deprivation. Yet if Selma outrages democratic sensibilities, neighboring Wilcox County offers something infinitely worse. Sheriff P.C. Jenkins has held office in Wilcox for twenty-six years. He is a local legend because when he wants a Negro for a crime, he merely sends out word and the Negro comes in to be arrested. This is intimidation and degradation reminiscent only of chattel slavery. This is white supremacist arrogance and Negro servility possible only in an atmosphere where the Negro feels himself so isolated, so hopeless, that he is stripped of all dignity. And as if they were in competition to obliterate the United States Constitution within Alabama’s borders state troopers only a few miles away clubbed and shot Negro demonstrators in Marion…

All over people of color have decided they no longer will allow themselves to be isolated and live in the kind of community where they are targeted by authorities, who stop them while driving, search them and arrest them to far greater extent than whites (even though they commit crimes at the same rate as white people).

Often, their decision to protest has been met with the kind of “white supremacist arrogance” King confronted. That arrogance has been on display at St. Louis Cardinals baseball games, at St. Louis Rams football games and at basketball games where athletes show solidarity with shirts saying, “I Can’t Breathe.” It has been on display when they purchase shirts that say, “Breathe easy, don’t break the law.” It has also been evident in malls where upper and middle class whites have been offended by the disruption caused by people protesting.

The arrogance has been at its worst when scolding black people for speaking out against police violence by raising the issue of “black on black” crime as if it is uniquely different and more severe than “white on white” crime. Of course, the impetus is that the perceived discrimination being experienced would not exist if black people would get their act together and until then they must tolerate the police.

For those wondering what “Black Lives Matter” hopes to achieve through protest, his defense of demonstrations in the same essay is pertinent:

Are demonstrations of any use, some ask, when resistance is so unyielding? Would the slower processes of legislation and law enforcement ultimately accomplish greater results more painlessly? Demonstrations, experience has shown, are part of the process of stimulating legislation and law enforcement. The federal government reacts to events more quickly when a situation of conflict cries out for its intervention. Beyond this, demonstrations have a creative effect on the social and psychological climate that is not matched by the legislative process. Those who have lived under the corrosive humiliation of daily intimidation are imbued by demonstrations with a sense of courage and dignity that strengthens their personalities. Through demonstrations, Negroes learn that unity and militance have more force than bullets. They find that the bruises of clubs, electric cattle prods and fists hurt less than the scars of submission. And segregationists learn from demonstrations that Negroes who have been taught to fear can also be taught to be fearless. Finally, the millions of Americans on the sidelines learn that inhumanity wears an official badge and wields the power of law in large areas of the democratic nation of their pride.

The last sentence stands out. Police brutality, to King, was a kind of manifestation of the worst inhumanity within government. When civil rights marchers were beaten severely and terrorized, it helped grow the civil rights movement by increasing opposition to tactics of repression.

King’s best efforts were about humanizing black people but too many still dehumanize their lives today.

So long as a status quo exists where it is acceptable for black lives to be undervalued, no amount of civil rights progress will quiet the discontent fueling this vibrant movement.