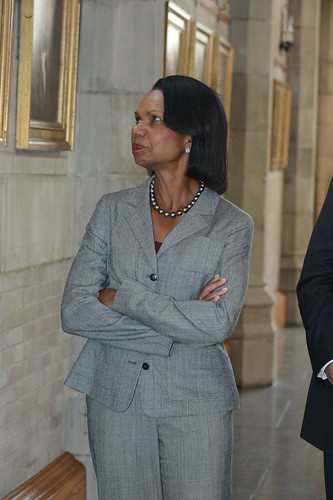 In the first week of the trial against former CIA officer Jeffrey Sterling, prosecutors have presented details about an operation involving a Russian asset who secretly provided Iran with flawed blueprints for a nuclear weapon. Sterling is accused of leaking classified information that exposed this operation. Former Secretary of State Condoleezza Rice has also taken the witness stand and testified about how President George W. Bush instructed her to convince the New York Times to not publish a story revealing the CIA operation.

Sterling is alleged to have provided information to Times reporter James Risen on a classified program that the government claims was “intended to impede Iran’s efforts to acquire or develop nuclear weapons,” which Risen detailed in his book, State of War.

The former CIA officer is charged with committing ten felonies, seven of which fall under the Espionage Act. The other charges include mail fraud and obstruction of justice.

Josh Gerstein of POLITICO reported on January 15 that Rice testified about the Bush administration’s effort to “kill” the Times’ story on the operation known as Operation Merlin and also prevent Risen from reporting anything about it.

Rice was “gravely concerned” to learn that the Times had found out about this operation. “The president talked about it and decided I should ask the New York Times leadership to come to the White House for a meeting to discuss why that story should not be published,” Rice recalled.

She added that the operation was “one of the only levers that we believed we had—that that president had—to try to disrupt the Iranian nuclear program.”

Rice maintained, according to talking points she used during the April 2003 meeting, “This information in the wrong hands could easily lead to the death of a US citizen and conceivably contribute to the deaths of millions of innocent victims of a foreign nuclear weapons program.”

The Bush administration succeeded in killing the story, and the operation was not exposed until three years later when Risen’s book was published. (Jill Abramson, then-chief of New York Times’ Washington Bureau, has said she regrets not backing a “great reporter” and folding under government pressure.)

The testimony from Rice was potentially intended to convince the jury that the government had gone to great lengths to keep the operation secret. Plus, her testimony makes it possible to argue the Times did not even think the public interest value was worth the risks posed by publishing the story.

Journalist Marcy Wheeler, who has been reporting on the Sterling trial for ExposeFacts.org, reported on testimony on January 14. Bob S., a longtime CIA operations manager who has worked on “weapons of mass destruction,” went through several cables related to Operation Merlin to help prosecutors argue everything had been done carefully because Risen presented it as a botched effort in his book. Prosecutors had Bob S. testify to the accuracy of numerous paragraphs from Chapter 9 in State of War.

The top counter-proliferation official confirmed that between 2001 and 2003 the CIA “had used the Russian dubbed Merlin to approach ‘other countries believed to be interested in WMD.'”

…[T]he CIA and national lab were very intent to build something that looked like a Russian schematic, complete with gaps in information that might arise from Russia’s compartmented nuclear development system (for some reason they had no concern that this would identify the other Russian asset involved in the operation, whose knowledge tracked that gap). In addition, purportedly, they were trying to hide that the Russian called Merlin at the trial — who had a post office box set up to correspond with potential targets, presumably in the US, and who emailed potential targets from the US — was in the US. In spite of both these details, however, they insisted on keeping the parts list — on what was supposed to be a Russian schematic reconstituted from a Russian lab — in English.

Walter C admitted he had never seen a Russian parts list in English before. He also mentioned information suggesting that the CIA or the nation’s weapons labs happen to operate a “system of Red Teams,” which test dodgy nuclear blueprints. The defense attempted to ask questions about this, but the government objected and the judge sustained the objection, even though the government had brought it up in court.

Much of these details about Operation Merlin are insignificant to whether Sterling is guilty or not. Judge Leonie Brinkema has made it clear that “all the government has to do is prove Sterling is one of Risen’s sources, regardless of however many other sources he might have.” But Wheeler contends that the CIA is seeking to repair its reputation through this trial and that is why so much is being presented about this operation in court.

“Unusual security measures,” according to Gerstein, have been adopted. “A seven-foot high folding screen and an office divider” have been “used to block spectators’ view of the witnesses” while they are on the witness stand. “Security personnel instructed those in the gallery to stay out of seats where the witnesses might be visible.”

Lawyers, the judge and Sterling, along with the jury, are able to see each witness. A few CIA staffers who have been in the gallery can see the witnesses too. But the public cannot see some of the CIA employees being cross-examined and “each time a spectator” enters the courtroom and attempts to sit in “unscreened seats” the security personnel panic.

Prosecutor James Trump during opening argument on January 13 characterized Sterling’s act as one done by a “bitter” and “angry” man who was seeking “revenge.” The government maintains that the African-American case officer was upset after he brought a racial discrimination lawsuit against the CIA and had it dismissed after the government invoked state secrets.

He was the case officer for the Russian nuclear engineer who was involved in relaying the flawed blueprints to Iran and prosecutors claim he “put the Russian’s life in jeopardy” and, as Gerstein wrote, “led other foreigners to have doubts about working with the CIA.”

Edward MacMahon, Sterling’s defense attorney, stated during open argument that Sterling never “betrayed his country.” He cast him as a whistleblower and maintained, “You’re not going to see an e-mail [relaying information to Risen.] You’re not going to hear a phone call. It doesn’t exist.” He added, “What we really have is a cloud that needs to be lifted off Mr. Sterling.”

There are no African-Americans on the jury, which is composed of seven men and seven women.

The New York Times reported that the defense has “raised a legal technicality that could sink the case: Prosecutors must prove that a crime was committed in Virginia, where the case was filed. Mr. Sterling was living in New York at the time, while Mr. Risen worked in Washington and lived in Maryland.”

Norman Solomon, also writing about the trial for ExposeFacts.org, characterized it as more like “National Security State v. The Public’s Right to Know” than the US v. Jeffrey Alexander Sterling.

All of the government witnesses testifying for the government seem to believe the CIA can do no wrong and are all participating in an effort to make an example out of Sterling. After all, Leon Panetta, John Brennan and David Petraeus are each former CIA directors who have been accused of leaks and they never faced any repercussions or consequences.

Solomon argued, “The CIA hierarchy continues to have no interest in accepting responsibility for its deceptions, no matter how horrific the results. But the agency has been hell-bent on making a scapegoat out of Sterling, a mid-level employee who was one of the agency’s very few African American case officers.”

Photo from West Point – The US Military Academy and in the public domain.