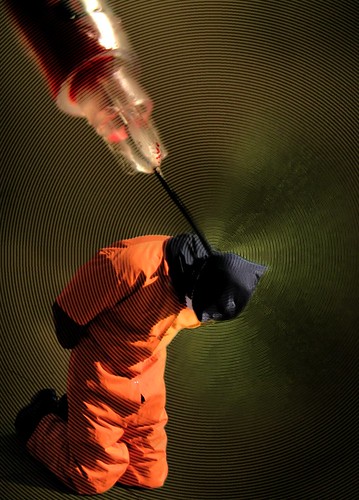 On the thirteenth anniversary of the first prisoners brought to Guantanamo Bay, a report from the Seton Hall Law Center for Policy and Research examines how the United States government used the facility as a “battle laboratory.”

Prisoners were treated like “test subjects” as personnel, including medical officers, engaged in experiments to develop new interrogation techniques. Numerous detainees were drugged upon arrival to help interrogators break them. One prisoner, Mohammed al-Qahtani, was treated like a “lab rat” and monitored closely by medical personnel to determine if his body could continue to be tortured.

The report was first covered and published at VICE by journalist Jason Leopold. It is based on unclassified government documents and statements from government officials and military personnel and co-authored by Joseph Hickman, a former Guantanamo guard.

“Every lab must have its test subjects,” the report declares. Guantanamo was “no different” except “its rats were human beings, detainees.”

The report not only makes the case that the torture techniques developed through experiments to “exploit intelligence” were exported to other facilities, such as Bagram and Abu Ghraib, but also highlights the disturbing reality that medical personnel were involved in “human subjects research” and conduct that likely constituted crimes against humanity.

According to Colonel Britt Mallow, the commander of the Criminal Investigative Task Force, [Major General Michael] Dunlavey and later [Major General] Geoffrey Miller referred to GTMO as a ‘Battle Lab’ meaning that interrogations and other procedures there were to some degree experimental, and their lessons would benefit DOD in other places. While this was logical in terms of learning lessons, I personally objected to the implied philosophy that interrogators should experiment with untested methods, particularly those in which they were not trained.”

“Enhanced interrogation techniques,” or torture techniques, were renamed “counter-resistance techniques” to make it easier to defend their use. Beginning in January 2002, the standard protocol was to give arriving detainees 1250 milligrams of mefloquine, an anti-malarial drug, which was “five times greater than necessary for the stated prophylactic use” and put them at risk of “severe psychological effects.”

As described in the report, “Mefloquine’s side effects commonly include hallucinations, anxiety, paranoia, aggression, psychotic behavior, mood changes, depression, memory impairment, convulsions, loss of coordination (ataxia), suicidal ideation, and possibly suicide, and they can last for weeks.” The side effects can be greater in “patients with personal history or family history of mental illness.” The drugs were given before prisoners were “tested for malaria,” suggesting the “excessive dose” was deliberate. [Previously, journalist Jeffrey Kaye has done extensive reporting on the use of mefloquine on detainees.]

It is highly unlikely that mefloquine was used for malaria. Much more possible is that military personnel were aware of the side effect and wanted them to occur in prisoners so they could modify their behavior and use the drug to aid in making them compliant.

…[Office of Legal Counsel] memos drafted by John Yoo did allow for the use of mind-altering drugs, maintaining that it was not torture unless it caused “permanent” or “profound” mental harm or damage. It argued that only drugs that “penetrate to the core of an individual’s ability to perceive the world around him, substantially interfering with his cognitive abilities, or fundamentally alter his personality” would qualify as torture. This would be satisfied by “the onset of ‘brief psychotic disorder’” or “delusions or hallucinations” lasting an entire day. The memo also cited, as an example of a profound disruption, a drug or action “pushing a person to the brink of suicide, particularly where the person comes from a culture with strong taboos against suicide.” The memo, however, claims that in order to satisfy the intent standard of the criminal statute, the administration of the drug must specifically be intended to cause such prolonged harm. Under this logic, torture would not result from the use of a drug with intent to cause lesser forms of psychological harm, such as anxiety, paranoia, aggression, depression, memory impairment, or mere suicidal ideation, all known side effects of high doses of mefloquine…

On October 2, 2002 at Guantanamo, personnel at a “Counter Resistance Strategy Meeting” discussed using “controlled chaos” at the facility. “Controlled chaos included taking steps to discover how to find and manipulate phobias, such as ‘insects, snakes, [and] claustrophobia.'”

Behavioral Science Consultation Team members Major Paul Burney and Major John Leso told the group, “[W]hat’s more effective than fear based strategies are camp-wide, environmental strategies designed to disrupt cohesion and communication among detainees . . . .[The] [e]nvironment should foster dependence and compliance . . . .We need to create an environment of ‘controlled chaos.’”

Two psychologists and one psychiatrist were a part of BSCT. Their mission was to monitor detainees’ behavior during interrogations and detention. They were to develop “psychological operations.” In some cases, they “simply made up” some of the torture techniques that were used against prisoners.

There was discussion about “new experiments,” including whether to use “truth serum” to manipulate the “camp environment” and “foster dependence and compliance.”

Al-Qahtani appears to have been subjected to some of the worst human experimentation. Throughout the time when he was being tortured daily, logs were kept showing medical personnel were running tests to make sure the cruel treatment never amounted to the legal definition of torture agreed upon by President George W. Bush’s administration:

…The first medical treatment was recorded in the Log on November 24, 2002 when he was given an IV and evaluated by a doctor “to ensure that he [was] physically able to continue [the interrogation].” While meeting with the doctor, “Detainee stated that he wanted to sign a form or a release stating that he did not want any medications. The doctor explained that no such form exists.” In the days and weeks that followed, the Log revealed that al-Qahtani had his blood drawn twice, received an EKG, CT scan, and ultrasound, had his blood pressure checked every few days, and had his pulse checked fifteen times (occasionally multiple times per day). Al-Qahtani’s blood was drawn twice, on December 4th and December 16th, by a doctor and a corpsman, respectively. The first time was to check his kidney function. The Log does not provide an explanation for the second instance, and it simply states “Corpsman drew detainee’s blood.”…

Most likely, as the study suggests, personnel were concerned about the “Torture Memos” and did not want the level of pain to be similar to the pain experienced from “organ failure, impairment of bodily function, or even death.”

The medical personnel would check his kidneys. If they were not failing, the torture could continue to be administered. Personnel would sometimes take al-Qahtani’s pulse multiple times in a day.

…On December 19th, when his pulse was recorded three times, an entry reads “His vitals were taken again. His blood pressure was normal but his pulse rate was high at 93. The medical representative will be monitoring the detainee’s vitals closely until his pulse rate is lower.”…

Once medical personnel took his pulse and it was at a safe level, al-Qahtani could be said to be okay for another session of experimentation.

Al-Qahtani was subject to developed “enhanced interrogation techniques” as early as November 23, 2002, but it was not until December 2 that Secretary of Defense Donald Rumsfeld officially approved any of the methods used. There were even “military working dogs” brought into the room with al-Qahtani during sessions, something the FBI objected to but Joint Task Force Guantanamo personnel ignored the agency’s objection and urged them to act like the “guests” they were.

He also was subject to some type of experimentation prior to November because at an October 2, 2002, BSCT indicated that “psychological stressors,” such as sleep deprivation, withholding food, isolation and loss of time, had been “extremely effective.”

“Dietary manipulation, environmental manipulation, sleep adjustment, presence of military working dogs, sleep management, yelling, loud music, light-control and stress positions” were all techniques that were adopted by the leadership at Bagram and Abu Ghraib. And, while the Air Force, Army, Marines, Navy and FBI had raised objections to a memo adopting more severe “enhanced interrogation techniques,” Joint Task Force Guantanamo did not hesitate to employ them.

When the report from the Senate intelligence committee detailing the CIA’s use of torture was released, Physicians for Human Rights (PHR) raised key objections to the abuse health professionals had committed in violation of treaties, laws and various ethical codes. The group highlighted the way the CIA relied on health professionals “at every step to commit and conceal the brutal and systematic torture of national security detainees.”

The CIA’s Office of Medical Services engaged in data collection from detainees “consistent with definitions of human subjects research under US federal codes.” PHR stated, “If further investigation establishes that human subjects research without consent was performed systematically on detainees, then such activities are violations of the Nuremberg Code and could constitute a crime against humanity.”

This study contains a glaring example of Qahtani being subject to research without his consent. He does not consent to the drugs he is being given at all.

There are many more personnel who are likely guilty of being involved in such criminal activity, as evidenced by the fact that leadership recognized they needed to conceal conduct from the Red Cross. Part of this awareness stemmed from advice being given by the CIA, which was involved in its own criminality as it operated a secret detention work where kidnapped terrorism suspects were brought to black sites and tortured.

LTC Beaver: “We may need to curb the harsher operations when ICRC [International Committee of the Red Cross] is around. It is better not to expose them to any controversial techniques.”

GTMO Interrogation Control Element (ICE) Chief David Becker: “We have had many reports from Bagram about sleep deprivation being used.”

CIA Counterterrorism Lawyer Jonathan Fredman: “In the past when the ICRC has made a big deal about certain
detainees, the DOD has ‘moved’ them away from the attention of ICRC.”

Fredman: “If someone dies while aggressive techniques are being used, regardless of cause death, the backlash of attention would be severely detrimental.”

Fredman: “The threat of death is also subject to scrutiny, and should be handled on a case by case basis. Mock executions don’t work as well as friendly approaches.”

LTC Beaver: “We will need documentation to protect us.”

Thirteen years later, the reality is that the vast majority of the 127 men, who remain imprisoned at Guantanamo, have not only been held in detention without charge or trial. They have also been guinea pigs in the United States’ brutal “War on Terrorism.”

Zero officials in government or the military have been held accountable for this barbarism. Instead, President Barack Obama’s administration has done everything it can to “move forward” without “looking back,” a policy that has helped war criminals escape justice, ink book deals, appear as experts on various television programs and obtain prestigious jobs at universities, where they can shape the impressionable minds of students and defend their past conduct as not torture.