Why is Saudi Arabia bringing down the price of oil?

Getting directly to the point: why is Saudi Arabia, perhaps the major contributor to the continuing fall of oil prices pumping more and more oil, while losing a huge amount of revenue in the process, apparently “cutting off their nose to spite their face”?

Some say they are doing it to hurt Iran, others to cut investment in fracking…

In my opinion it could be quite simple: the kingdom is in real danger of being destabilized by the Islamic State (ISIS) and the “caliphate’s” main financing comes from selling bootleg oil.

This was the oil situation only as far back as September of 2014. 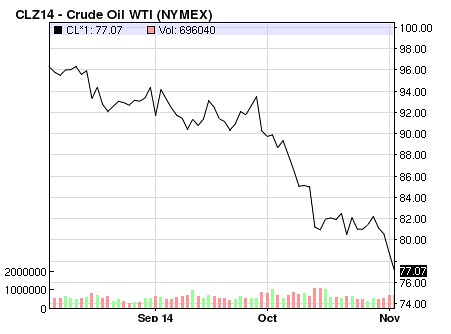 And the situation now:

I am unable understand the logic of the Saudi Oil Minister’s statement “Whether oil goes down to $20, $40, $50, $60, it is irrelevant”. Statements like this only gave speculators in the oil futures markets a licence to make a multi-billion dollar killing at the expense of Saudi Arabia, the world’s largest oil producer and owner of 25 per cent of the planet’s crude oil reserves.(…) No energy journalist in the world can ignore Saudi Arabia’s oil policy shifts and I am no exception. Six months ago, every oil executive, bank economist and oil trader I talked to assured me that $100 Brent was Saudi Arabia’s price for two reasons. One, Ali Al Naimi publically said so. Two, the Saudi budget break-even price had risen from $65 to $90 Brent due to the increased social welfare spending. Both these assumptions were flawed.(…) the Saudi Finance Ministry conceded that the crash in oil means a $89 billion revenue loss to Saudi Arabia in 2015. Hellenic Shipping News

Saudi Arabia is the home of Mecca and Medina. No Islamic Caliphate could pretend to represent all Muslims without controlling the two holiest sites of Islam. Obviously conquering Saudi Arabia would have to be ISIS’s final goal as it has always has been Al-Qaeda’s… and there is wide, popular support for their views in the country.

There is a broad category of Saudis who agree with the extreme interpretations of religion and the call to jihad espoused by Osama bin Laden, and they’re also in agreement with Bin Laden’s political perspective — accusing the Saudi royals of being puppets of the West, attacking the U.S. for support of Israel and its invasion of Iraq, opposing the U.S. troop presence in the region. There is a significant section of Saudi public opinion that is supportive of Bin Laden. Time

We must not underestimate ISIS, although many think it is a gathering of fanatic madmen. ISIS is a developed model of al-Qaeda and it has extraordinary military and administrative skills. ISIS is also distinguished by its propaganda practices(…) Unfortunately, and although we defeated al-Qaeda in the past, its ideology was not uprooted. This is why a new organization surfaces every time an old organization is eliminated. The ISIS ideology inside the country remains a lot more dangerous than that which lies beyond its borders. Abdulrahman al-Rashed – Al Arabiya

That leads me to believe that the real difference between ISIS and Saudi Arabia is not the people or the culture of the country but merely the Saudi royal family. Here is what I mean:

An Associated Press tally of announcements from the official Saudi Press Agency shows 83 people have been beheaded in Saudi Arabia in 2014(…) The kingdom follows a strict interpretation of Islamic law and applies the death penalty on a number of crimes, such as murder and rape, as well as apostasy and witchcraft. (emphasis mine). New York Times

Here is the latest:

Saudi Arabia’s King Abdullah is suffering from a lung infection and has been breathing with the aid of a tube, Saudi officials have said. The monarch, who is said to be aged about 90, was admitted to hospital on Wednesday for medical checks. King Abdullah, who came to the throne in 2005, has suffered frequent bouts of ill health in recent years. His age and condition has led to increasing focus on the issue of the Saudi royal succession. Crown Prince Salman, who is in his late 70s, is next in line to succeed the king, though questions remain over who will follow. BBC News

A 90 year old man suffering from pneumonia to be succeeded by a Crown Prince in his late 70s… and after that nobody is really sure what comes next.

Sooner or later, of course, the crown will have to move to the next generation. At that point, things may get a little dicey. Under Saudi succession law, the king has to be a male descendant of Abdulaziz, but beyond that, the incumbent king has wide latitude to determine his successor. Given that many of the brothers took after Dad or even exceeded him—King Saud, the second king, had 53 sons—there are now thousands of these descendants, many of whom have senior government positions, and the potential for palace intrigue is high. Slate

For me then it seems logical to think that allowing Saudi Arabia to lose many billions of dollars, which can be made up in the short term by the country’s massive cash reserves, is (you should pardon the expression) some reasonable sort of a “Hail Mary pass” to keep ISIS at bay, while sorting out the family quarrels.

For the Saudi royal family it would be vital to weaken ISIS any way they can short of confronting them directly in the ground fighting in Iraq,  which, given the ideological affinities, is something that might cause serious blowback, in the form of a successful internal rebellion against the royal regime at home.

Why is Saudi Arabia bringing down the price of oil?