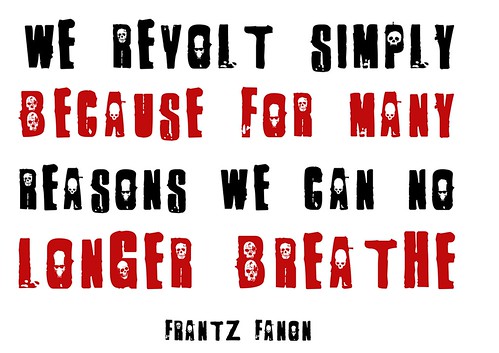 Last December in my New Year’s predictions for 2014 I wrote:

My clearest reading of 2014’s tea leaves is “instability”: worldwide instability and in my opinion this instability has its origins at the heart of the most developed economies of the western world. The causes? We are undergoing a technological revolution and process of globalized outsourcing, combined with a reduction of the welfare state that is severely degrading the middle class in developed countries and converting them slowly, but surely into working-poor. Anyone who has read a bit of history could tell you how dangerous that is.

I will stand on that this year too and I think things are going to get worse, perhaps much, much worse. The Reuters year end wrap gives a rather useful shopping lists of potential disasters.

“Normally after a year like this you might expect things to calm down,” said John Bassett, former senior official with British signals intelligence agency GCHQ now an associate at Oxford University. “But none of these problems have been resolved and the drivers of them are not going away.” The causes are varied – a global shift of economic power from the West, new technologies, regional rivalries and anger over rising wealth gaps. Reuters

I would add to that the possibility of an airborne pandemic, a sort of sneezing “Ebola”, which is going to happen sooner or later in today’s interconnected world… or (much more likely if the US-EU pressure doesn’t let up) some very, very nasty surprise from Russia, because as Dimitri Orlov says,  “The Russians don’t threaten, they act”.

But as I stressed a year ago, at the heart of everything is the ongoing collapse of the middle class in the most highly developed countries. This is something that is destabilizing precisely those countries whose role has always been to stabilize the rest. That is the multiplier of all the other instabilities.

The great middle-class fear today is that the connection between personal aspirations and societal opportunities is breaking down.(…) The middle class is thinning. Belonging is a matter of self-identity, and fewer Americans buy into its defining presumptions. Robert Samuelson – Washington Post

After you read something like that, from someone like that, news about the militarization of urban American police forces begins to look like the “good and the great” are getting ready for some serious, social unrest on the order of “urban warfare”.

During the Obama administration, according to Pentagon data, police departments have received tens of thousands of machine guns; nearly 200,000 ammunition magazines; thousands of pieces of camouflage and night-vision equipment; and hundreds of silencers, armored cars and aircraft. New York Times

The federal government shipped nearly 4,000 more assault rifles to local law enforcement agencies in the three months following the Ferguson riots, marking a huge surge in the amount of lethal firearms being doled out to police and sheriff’s offices.(…) The Los Angeles School Police Department decided it didn’t need grenade launchers, but did figure it should keep the M-16 rifles and the armored vehicle it had previously received. Washington Times

Eric Garner, a harmless man, who was strangled to death by a brutal police officer, has given me a simple answer to a question that other Americans have often asked me over the years, “why do you live abroad?”.

When people ask me why, being American, I don’t like living in the USA, I usually find myself launching into some cumbersome, wordy-nerdy explanation, filled with dangling clauses and so forth… but now poor Mr. Garner has given me a three word answer that says it all… When I’m in the USA (or even think about being in the USA) I can’t breathe.