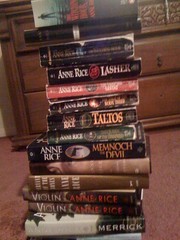 I stopped by my local Barnes & Noble store to kill some time Thursday afternoon and saw where Anne Rice has her first new book for The Vampire Chronicles in ten years. Prince Lestat is the eleventh book in this series.

From the Goodreads.com intro for Rice:

Anne Rice (born Howard Allen Frances O’Brien) is a best-selling American author of gothic, supernatural, historical, erotica, and later religious themed books. Best known for The Vampire Chronicles, her prevailing thematical focus is on love, death, immortality, existentialism, and the human condition. She was married to poet Stan Rice for 41 years until his death in 2002. Her books have sold nearly 100 million copies, making her one of the most widely read authors in modern history.

In a somewhat unusual (for me) situation, the first book of Rice’s that I read just happened to be the first she wrote – Interview with the Vampire. My sister had a copy and I read it some time around ’83 or ’84 and that started the two of us reading and sharing the Vampire and Mayfair Witches books. I have not read all of the Vampire books but besides Interview… I have read The Vampire Lestat, Queen of the Damned, The Tale of the Body Thief, Memnoch the Devil, and Blood and Gold. From the Mayfair Witches I have read The Witching Hour, Lasher, and Taltos.

As much as I have enjoyed the Vampire and Mayfair Witches books my absolute favorite of Rice’s is The Mummy or Ramses the Damned (from Goodreads):

Ramses the Great has reawakened in opulent Edwardian London. Having drunk the elixir of life, he is now Ramses the Damned, doomed forever to wander the earth, desperate to quell hungers that can never be satisfied. He becomes the close companion of a voluptuous heiress, Julie Stratford, but his cursed past again propels him toward disaster. He is tormented by searing memories of his last reawakening, at the behest of Cleopatra, his beloved queen of Egypt. And his intense longing for her, undiminished over the centuries, will force him to commit an act that will place everyone around him in the gravest danger.

From the wiki for The Mummy…:

During the Edwardian period in 1914, a wealthy shipping-magnate-turned-archaeologist, Lawrence Stratford, discovers an unusual tomb. The mummy inside, in its left-behind notes, claims to be the famed pharaoh Ramses II, despite the tomb’s dating only to the first century B.C. (the historical Ramses II died in 1224 B.C.). Before he can fully investigate this claim, Lawrence unexpectedly falls dead, and those around him fear he was the victim of a curse placed on the tomb. Nonetheless, the mummy and other belongings are shipped off to London, and placed on temporary display in Lawrence’s house before they are taken by the British Museum.

Lawrence’s daughter Julie Stratford is the designated heir to her father’s shipping company, as well as the dysfunctional family that surrounds it. Her cousin Henry is an alcoholic and gambling addict who has been draining the family fortune with the aid of his uncle. Julie is engaged to marry Alex Savarell, a viscount and son of Elliott, the current Earl of Rutherford. Although the marriage is a standard alliance between the wealthy Stratfords and an impoverished family of nobles, Alex truly loves Julie, though she is unable to return these feelings.

For all the fanfare Rice’s Vampire and Mayfair Witches books have brought, a couple of her other stand alone books may be the most consequential just because of the topics she covered, even as fiction. Feast of All Saints is set in the pre-Civil War New Orleans and covers “free people of color” – predominantly mixed race. Cry to Heaven is set in 18th Century Venice among the castratii.

I am among the people, including Rice herself, who questioned the casting of Tom Cruise as Lestat in Interview with the Vampire yet had to admit that he pulled the role off. I have never made it through Queen of the Damned. She has seven total IMDB writing credits though her wiki does discuss some possible future movies and/or TV productions.

According to the critics and such, Rice’s writing is supposed to contain heavy elements of eroticism of various flavors, especially the books she has written under the names Anne Rampling and A. N. Roquelaure. I have not read any of these books though I have watched the movie for Exit to Eden which I consider a “good” bad movie.