Is Revolution Necessary… Is it Possible?

A June 2013 Gallup poll revealed that 70% of Americans hate their jobs or have “checked out” of them. Life may or may not suck any more than it did a generation ago, but our belief in “progress” has increased expectations that life should be more satisfying, resulting in mass disappointment. For many of us, society has become increasingly alienating, isolating and insane, and earning a buck means more degrees, compliance, ass-kissing, shit-eating, and inauthenticity. So, we want to rebel. However, many of us feel hopeless about the possibility of either our own escape from societal oppression or that political activism can create societal change. So, many of us, especially young Americans, rebel by what is commonly called mental illness. Salon

If it was conventional wisdom that a bunch of unelected bankers looking out for rich people were the reason everyone was out of work, politicians would be forced to explain to angry voters why we had this crazy system and might actually consider doing something about it. The late Aaron Swartz

“Capitalism” like “Communism” is a word so overused, that like “awesome”, it has become nearly meaningless. Let us instead just refer to our “Present, Global, Economic System” (PGES).

There is no other system, so for want of anything better, “PGES” will do just fine. It is morphing constantly so some “one size fits all” can morph with it.

Which bring us to the question, does life really, “suck any more than it did a generation ago”?

Because we are being “optimized” by the new technologies beyond the dreams of the pioneers of PGES.

Ask any battery chicken or your average pig… it’s true they can’t talk, but they are experts on the subject of optimization.

Seriously, since Andrew Taylor, invented “Scientific Management”, managers have found more and more ingenious ways of optimizing the work force so that it produces as efficiently as the battery chickens lay eggs, but with computers their ability to do this has grown geometrically. To make it more onerous those who hold the levers that control this system give the impression that they no longer even breathe the same air as the rest of humanity.

To be brief, let us say that at this point in time we find ourselves writhing helplessly in the hands of an itinerant, universal, cosmopolitan, extractive, managerial oligarchy of no fixed abode, totally out of the control of any democratically elected institution, with no clear accountability for, or title to, the unimaginable wealth that passes through, and more often than not, sticks to their hands.

What has happened to a system that was always callous, but which didn’t seem so insanely “out of control”?

Under the title, “Have US Corporations Renounced Citizenship?“, which I recommend reading in full, William Pfaff gives a very serviceable explanation of many of the factors.  Among other things Pfaff writes:

Part of the reason for the dramatic change that has taken place in American business opinion obviously is globalization of business and production. A second is the onset of globalization-induced opportunities for tax minimization or sheer tax evasion. A third, as I have noted before, is the shift of corporate control from owners, now frequently powerless, even collectively, to opportunistic professional management. The most important reason, however — in my opinion – has been the profound change that has taken place in economic ideology. Both monetarism and market theory remove from economic management voluntarism, political intelligence, and moral responsibility, by describing economic function as objective and automatic. Thus the customer always makes the most advantageous choice, so the market presents a perfect and efficient mechanism dictating the choices that must be made by businesses, while always tending towards perfect competition. Labor is a mere commodity, and unions and wage demands obstacles to the free function of markets. Governments by nature are obstacles to economic freedom. William Pfaff

To bring this down to the ground, where the rubber meets the road, where it connects with everyday life, I thought that this quote from an article from Time that I used to illustrate a piece on the fast food workers strike, would better give the rank flavor of the economic ideology that Pfaff analyzes.

A living wage would have more long-lasting effects on the industry than just the price of its menu items. Lichtenstein says it would likely create permanent employment in the industry, meaning more of its workers would stay for two to three years, likely leading to further demands on working conditions. “From the company’s point of view, if they know their employees are going to be there for three years, then there’s also this informal pressure on the managers to accommodate the workers,” he says, citing the possibility of wage creep and further increased labor costs for employers. “Managers then can’t just move people around all the time. Firing gets more difficult. So they don’t want a permanent workforce.” Time Magazine 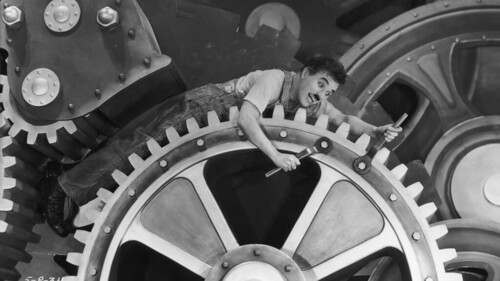 Jack Lemmon’s office in “The Apartment”

A big office might still look quite similar today, but the difference would be that one computer might be handling much more data than the entire office of the ’50s did… multiply that by the workstations you see in the picture and you’ll get an idea of the pressure created.

We Should ask ourselves:

Do our societal institutions promote

Of course all of this is aggravated by ours being a consumer society, where capitalism’s foundational virtues such as patient suffering in the present for a better future tomorrow, sacrifice and the postponement of gratification are anathema and if followed would be the final coup d´grace for the wounded economy… Just ask Angela Merkel. According to the canons of marketing, people are supposed to be happy, they “deserve” being happy, but at the same time they never should be satisfied. This construction is obviously insane, but at the same time we are constantly being told, “there is no alternative”.

Summing up you could say that

Global capitalism is a complex process which affects different countries in different ways. What unites the protests, for all their multifariousness, is that they are all reactions against different facets of capitalist globalisation. The general tendency of today’s global capitalism is towards further expansion of the market, creeping enclosure of public space, reduction of public services (healthcare, education, culture), and increasingly authoritarian political power.  Slavoj Žižek – London Review of Books

The big question: who is ever going to bell the cat?

Is Revolution Necessary… Is it Possible?