The Importance of Not Being Quiet 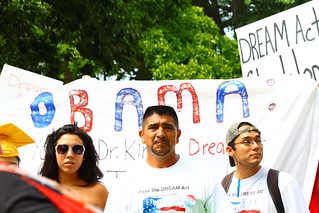 Last night President Obama did the right thing and will help millions of people in this country. It was a big day for immigration reform groups and a powerful vindication of an aggressive form of activism.

I’ve repeatedly heard activist groups told to be quiet, not rock the boat, just trust the White House to reach a good compromise, and only attack Republicans. Yet time and time again the old adage ‘the squeaky wheel gets the grease’ has been proven right.

A few immigration groups have repeatedly challenged and embarrassed President Obama and this produced results. It got Obama to delay action for the DREAM kids and it got Obama to take broader action yesterday.

Similarly, when LGBT activists started chaining themselves to the front gate of the White House this spurred Democrats to take action and President Obama to finally “evolve.”

Multiple protests large and small directed at Obama kept him from approving the Keystone XL pipeline for years. While it is unknown what he will do in his last two years, it at least made him afraid to touch the issue before his re-election

I don’t criticism the President because I have some personal grudge against him, simply want to make him unpopular, or am a natural contrarian. I criticize him because I want better policies that will help improve the lives of regular people. Naming and shaming has proven to be one of the few tools that spur people in power to take action. I would happily write only an endless string of glowing articles about Obama if he spent his time adopting better policies.

The Importance of Not Being Quiet