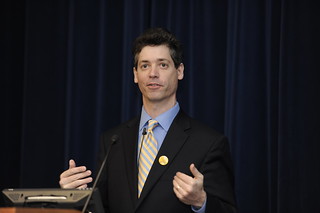 This defense of Jonathan Gruber in the New Republic simply doesn’t fit with what actually happened. First, Jonathan Cohn claims Gruber never hid his conflict of interest while pretending to be an outside expert in media interviews.

At the same time this was happening, reporters like me were constantly seeking interpretation of the policy process and different proposals in circulation. Gruber was among the experts we would interview and he did not hide his role as an HHS consultant, although not everybody was aware of it and, following reporting of that fact by the blogger Marcy Wheeler, he began disclosing that more consistently. One reason reporters (myself included) turned to him regularly is that he was truly an independent voice who spoke his mind, and was willing to deviate from the White House party line even though he broadly supported the Administration’s efforts.

This is simply not true. The New York Times point blank asked Gruber if he had any conflict of interests before letting him pen an op-ed and he signed a contract claiming he did not. The New York Times eventually issued a correction about his op-ed and put the blame squarely on Gruber for lying to them in writing. If that doesn’t count as “hiding,” I don’t know what  does.

Cohn goes on to pretend that while Gruber was hiding his relationship with the HHS, he was offering rather pessimistic analyses of the Affordable Care Act when in reality he was being a hyperbolic cheerleader for the law. From Cohn:

The most memorable instance of this was a set of statements that the Affordable Care Act would not do much to control costs. Gruber’s view, which many other economists shared, was that the law’s payment reforms might not do much to change the underlying dynamics in medical care that led to ever-higher spending. Mostly this was because Gruber thought most of the ideas under discussion were promising but, at that time, unproven.

This is not at all how I remember Gruber’s assessment of the law’s cost controls. At the time Gruber was stretching the truth beyond its breaking point to help sell the ACA. Gruber told Ron Brownstein, “My summary is it’s really hard to figure out how to bend the cost curve, but I can’t think of a thing to try that they didn’t try. They really make the best effort anyone has ever made. Everything is in here…”

This article deeply angered me at the time, because Gruber’s statement was provably false. This was not the sober analysis of an outside expert.

During this time I was fighting for Democrats to include several progressive provisions the CBO had previously scored as significant cost control measures like a robust public option, drug re-importation, and direct drug price negotiation. Provisions that would have saved taxpayers hundreds of billions.

The Obama administration was actively using Gruber’s hyperbolic statements about the law’s cost control to undermine the case for these progressive policies. They made it seem like the Obama team had already done enough on cost control. This helped Obama mostly avoid talking about proven cost control measures like drug re-importation which Obama promised to kill in his secret deals with PhRMA.

It was very convenient for Obama that when Gruber claimed “I can’t think of a thing to try that they didn’t try,” he must have forgotten about these provisions Obama had already secretly taken off the table.

UPDATED: Cohn has updated his article in responsible to my criticism about Gruber failuring to disclose his conflict of interest to the New York Times.

Voiceprints: Time to Be Afraid Again

Burying My Father Who Was One of My Biggest Fans