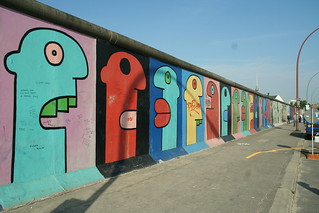 This is a remaining section of the Berlin Wall, now used as an open air piece of art.

I wasn’t there, but I foresaw its happening in a book entitled ‘Une autre Europe, un autre Monde’ [Another Europe, another World], begun in 1983 and rejected by every major publisher in Paris between 1985 and 1989, as I revised it to keep pace with events. In early 1989 a small academic publisher in Lyon run by a professor of cybernetics accepted it because it took a systems approach to what was, at the time, a divided Europe. I was in a taxi from the Gare de Lyon to my home in Montmartre, carrying the first copies of the book fresh off the presses when the driver’s radio announced the fall of the Berlin Wall.

Before climbing the stairs to my fifth floor apartment, I bought a bottle of champagne at the corner bistro and from the courtyard called up to a German-Italian couple to come and celebrate.  As we toasted the news, I declared confidently that Germanay would be reunited within a year. My neighbors thought I was way off the mark, but it happened eleven months later, as Mikhail Gorbatchev reminded us yesterday in a speech during the twenty-fifth anniversar festivities in Berlin.

In that speech – of which I’ve only heard excerpts on RT, the Russia Today English language news channel – he affirmed that the Soviet government – which he led at the time – had been ahead of the East German government led by Erich Honecker.

Indeed it was: My first inkling that Europe would in fact be reunited came in the spring of 1989 when Gorbatchev was seen giving a most perfunctory fraternal kiss to his East German counterpart. Of course I had no way of knowing that during his visit to East Berlin the Soviet leader had told Honecker, the most rigid of Eastern European leaders, to get with the times and allow the wall to come down.

During that incredible summer of 1989, the Hungarian government, which had always seen itself as a bridge between Western Europe and the Soviet Union, quietly ceased demanding visas from East Germans vacationing on Lake Balaton and began dismantling its border fence with neutral Austria, the real no man’s land between Eastern and Western Europe.  As the news made its way through the grapevine, thousands of East Germans vacationing on Lake Balaton (known as the Hungarian Sea) took their suitcases and fled the coup. From there the reunification of Europe was unstoppable. In August, Poland got a non-Communist, Catholic, prime minister, with Solidarity leader Lech Walesa eventually becoming president; and after the Berlin Wall fell, Czechoslovakia saw the start of the Velvet Revolution that culminated in long-time dissident writer Vaclav Havel becoming president. I watched his inauguration at the Charles University in Prague on French television.  During his speech he said, with the usual twinkle in his eye, that his mother was happy that her son the dunce had finally made it.

It’s truly disheartening to contrast the euphoria of that fall with what is happening in Europe today.  One is tempted to see in the European Union’s economic crisis the rise of Fascist parties and the crude attempts to bring Ukraine into its fold a third repeat of Europe’s modern history, in which it seems unable to resist descending into violence every twenty-five or thirty years or so: 1870, the Franco-Prussian War that resulted in the unification of Germany; 1914-1918: World War I; 1939-1945: World War II.

If you think Europe has enjoyed almost sixty years of peace since then, you’re overlooking NATO’s war against Serbia over Kosovo that took place in the 1990’s. Actually, many political observers refer to that war as a precursor to the pro-European coup in Ukraine which has been followed by fighting in the pro-Russian eastern part of that country.

Try to catch Gorbatchev on RT or RT.com, then take the time to listen to a speech made by Vladimir Putin at a European Security Conference in Munich in 2007 by clicking on this link http://vimeo.com/38311242 sent by my friend and colleague Jeff J. Brown in Beijing.  You’ll see McCain and Liberman sitting there with bored expressions in the front row, while Angela Merkel looks at the Russian President with undisguised admiration.

I’m not implying that the German Chancellor has a crush on Putin, but rather that they share a common commitment to peace and solidarity, the foundational principles that set Communism apart from ‘The West.’ The Western media thas consistently affirmed that the enunciation of those principles is mere propaganda, that Communist leaders cannot be trusted no matter what they say, and they extend that opprobrium to Putin who is guilty of being a former Communist apparatchik. I’ve often affirmed that Putin did not throw the solidarity baby out with the Communist bathwater and comments by The Saker emphatically confirm that he is a social democrat.

Never before has a world been so greatly in need of a leader who seeks peace and solidarity rather than full spectrum dominance.  The question is will Obama-as-lame-duck enable Putin’s worldview to become the driving force behind the international community?

P.S. For a brief history of the Berlin Wall, see Abby Martin’s Breaking the Set on RT.