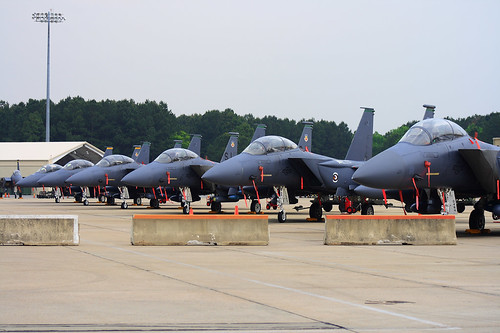 Lined Up and Ready to Go

“The time has come to act,” said President Obama today after previously asserting robustly that it was previously not the time to act. “And so, I have ordered airstrikes commencing immediately on ebola. We won’t stop until we have degraded, some other d-word I forgot and ultimately destroyed ebola.”

A White House source named Susan Rice, who asked not to be named because everytime she speaks on the record bad things happen to her, told members of the press Obama made the decision after conferring long into the night with his closest advisor, himself. “Barack told me that when times are tough you go with what you know, and for every crisis since near day one of this presidency, when something went wrong overseas our go-to response has been airstrikes. Libya, Iraq, Syria, wherever. OK, maybe not Benghazi. So, once we saw this piece last night on Colbert saying ebola was sort of a problem, the president ordered the attacks.”

“Not a big deal anymore really, we have an online form for it now he just fills out. Hit submit and boom, death from above b*itches! God I love it so!” said Ambassador Rice, drooling, as she was led from the room to be put down.

When asked how airstrikes would be able to defeat a virus, a White House spokesperson was quick to respond “Why’d you even ask that question– don’t you support the troops? We have been using airstrikes to defeat an idea, terrorism, and that’s worked out. I am told by experts, top men, that a virus is actually physically larger than an idea, so this should be a walk in the park for our brave military personnel.”

Other measures the president has undertaken include carpet bombing the city of Dallas, where America’s two indigenous ebola cases began. “At first I was kinda worried about dropping napalm on American folks,” said the president in an exclusive interview with New York Times columnist Thomas Friedman, who repeatedly licked the soles of the chief executive’s feet during the session. “But you know, pretty much no other folks outside Texas give a crap what happens to Texas folks, so it seems to have worked out. And it’s not like the state was going to vote Democrat anyway.” Obama pointed to his own eyes, then out the window, saying aloud “I’m watching you Missouri. Clean up that Ferguson thing or we just might find us some ebola in the ash tray of your car and have to clean it up with a couple of smart bombs, ya’ hear?”

Several doctors contacted for comment expressed skepticism about the president’s plan to bomb ebola, but admitted if they could not get their own professional health staff to wash their hands and stop getting on airplanes after caring for infected patients, well, why not try it his way.

Military leaders, reached in bunkers just outside Baghdad where they were placing bets on whether they would die next week at the hands of an ISIS assault or the Iraqi Army mishandling its own weapons, simply sighed and reminded this reporter that “when that ebola thing goes south like this stupid motherf*cker of a war will, don’t you blame us.”

The ebola virus was last seen dancing a merry jig, laughing to itself about how easy it was to draw the U.S. deeper into its quagmire. “Excellent, excellent,” it was heard to mutter.

Things the election 2014 pollsters are not taking into account 2