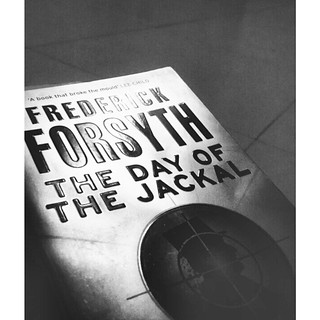 The Day Of The Jackal. Frederick Forsyth.

Frederick Forsyth’s first novel, The Day of the Jackal was a New York Times best seller sensation and Edgar Award winner. I read it shortly after publication along with his next two novels. I’m not sure why I got away from reading his works, but it may have been as simple as just too many good books from too many other good authors. Plus it is difficult, if not impossible, to reach the top levels of success after achieving it at the start.

Frederick Forsyth, CBE (born 25 August 1938) is an English author and occasional political commentator. He is best known for thrillers such as The Day of the Jackal, The Odessa File, The Fourth Protocol, The Dogs of War, The Devil’s Alternative, The Fist of God, Icon, The Veteran, Avenger, The Afghan,The Cobra and The Kill List.

I did not know anything of Forsyth’s background when I started this diary but I have to say I am impressed. From his bio on his web site:

In 1965 he joined the BBC and was sent to Biafra to cover the war that was raging in Nigeria. What he saw of this brutal and cynical conflict made it difficult for him to toe the editorial line of the BBC’s coverage so he resigned, turned freelance, vanished into the thick of the conflict and later emerged to publish the highly controversial The Biafra Story. In 1969 he decided to use his experience as a Reuters reporter in France as the basis for a thriller. Within 35 day he’d completed The Day of the Jackal, which established him as one of the world’s leading thriller writers. To date it has sold in the region of 10 million copies and was made into a major film starring Edward Fox in 1973.

Wiki quotes him from a BBC documentary:

I was told quite bluntly, then, ‘it is not our policy to cover this war.’ This was a period when the Vietnam War was front-page headlines almost every day, regarded broadly as an American cock-up, and this particularly British cock-up in Nigeria was not going to be covered. I smelt news management. I don’t like news management. So I made a private vow to myself: ‘you may, gentlemen, not be covering it, but I’m going to cover it.’ So I quit and flew out there, and stayed there for most of the next two years.

As I mentioned earlier, I also read The Odessa File and The Dogs of War not long after publication (though if I remember correctly, it was first run paperback reads).

Forsyth’s IMDB page shows eighteen writing credits. The Day of the Jackal with Edward Fox, The Odessa File with Jon Voight and Maximillan Schell, The Dogs of War with Christopher Walken and Tom Berenger, and The Fourth Protocol with Michael Caine and Pierce Brosnan all fit the definitions of “a major motion picture.”

Wiki also has some discussion on Forsyth’s writing style:

Forsyth eschews psychological complexity in favour of meticulous plotting, based on detailed factual research. His books are full of information about the technical details of such subjects as money laundering, gun running and identity theft. His novels read like investigative journalism in fictional guise. His moral vision is a harsh one: the world is made up of predators and prey, and only the strong survive.

Forsyth’s novels typically show the ways in which spies, gangsters, assassins, mercenaries, diplomats, business leaders and politicians go about their business behind the scenes; the sort of things that the average reader would not suspect while reading a simple headline. The Jackal does not just go out and shoot at Charles de Gaulle: he does meticulous research on the man at the library of the British Museum; obtains papers for his false identities; travels around Paris to find a good location for a sniper’s nest; and buys and tests his weapons.

I wonder if Forsyth received any visits from the British equivalent of Homeland Security for his descriptions of how “…spies, gangsters, assassins, mercenaries, diplomats, business leaders and politicians go about their business behind the scenes…”?