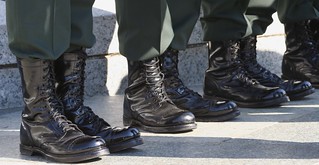 They’re just getting you used to the idea

While our military operations in Syria against ISIS have only started the prediction creep is already growing rapidly. That is when top politicians, Obama officials, military leaders, and outside experts start telling us that the relatively limited campaign we were sold could easily become much longer and more involved. This mentally prepares people for the actual mission creep.

The most extreme example so far is former Secretary of Defense Leon Panetta who told USA Today he thinks “we’re looking at kind of a 30-year war,” not just against ISIS, but also related groups in several other countries.

He is not alone in predicting that this war is going well beyond the limits Obama initially indicated. VP Joe Biden has already declared it will be a “hell of a long fight” against ISIS. The Chair of the Joint Chiefs of Staff Gen. Martin Dempsey said it might be possible ground troops will be needed. Former Defense Secretary Robert Gates said a “small number” of American ground troops will be needed to vanquish ISIS.

Speaker John Boehner (R-OH) made it clear that he thinks ground troops will eventually be needed, a position shared by many prominent Republicans.

The prediction creep isn’t just a national phenomenon. Former UK Prime Minister Tony Blair also thinks there may come a time when Western combat forces will need to be used.

If you don’t think wars in the Middle East will take more resources, time, and effort than was originally promised you haven’t been paying much attention the past decade.