What is remarkable about the latest New York Times/CBS News/YouGov poll of every single Senate race is how predictable the results would be even to someone who paid no attention to the 2014 election and knew only the most basic information about American politics. 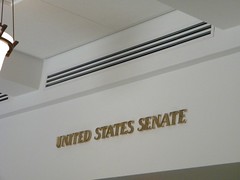 At the moment the results almost perfectly align with the 2008 President election. In almost every state Obama won in 2008, the Democrat has at least a nominal lead in this poll, and almost every state won by John McCain, the Republican is ahead. The only exceptions are in Maine where long time incumbent Republican Susan Collins holds a strong lead, and Kansas where there is no Democrat on the ballot and a strong Independent candidate is scrambling the normal partisan breakdown.

In addition, the closest races between Republicans and Democrats are in Iowa, North Carolina and Colorado. All three are considered Presidential swing states. So if Democrats do lose a significant number of seats this year it will be in large part because Obama’s terrible approval rating has moved these marginal states slightly right.

This is the nationalization and normalization of the politics in the Senate. After this election the number of Senators who are misaligned with their state’s partisan leanings will practically be cut in half and we could potentially see the phenomenon almost disappear by the end of the decade.

The Senate is going to need to adjust its rules to this reality or risk being even more gridlocked than it has been.