For some time now, MMT has been receiving criticism from self-identified progressives charging that MMT economists and advocates aren’t concerned about one of the most pressing problems in modern democracies and especially in the US, namely, increasing and often extreme inequality. MMT supporters have responded by citing much previous work on inequality, a lot of it done at the Levy Institute, by pointing out their great concern over the problem, and their work in advocating for a Federal Job Guarantee that would do more than perhaps any other single piece of legislation to ameliorate both poverty and inequality.

Suddenly, however, the concern of MMT economists with the problem of inequality was brought home by Pavlina Tcherneva. when she developed a graphic based on data produced by Emanuel Saez and Thomas Piketty. The graphic demonstrates one of the reasons that inequality has grown so much over time, because the share of income growth during economic expansions has increasingly been concentrated in the top 10%, as time has passed since 1949. Her graphic was published in the Journal of Post-Keynesian Economics, and quickly spread on twitter and picked up by Neil Irwin at the New York Times in an Upshot post. Here’s the graphic: 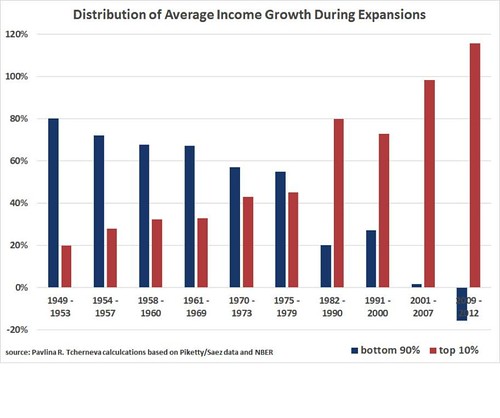 After this, it will be much harder to ignorantly charge that MMT is unconcerned with economic inequality. And, hopefully, people will begin to debate MMT-based proposals for a job guarantee at a living wage legislation, universal health insurance, enforcement of financial legislation, regulation of banks, and counter-cyclic stabilization of the economy, from the viewpoint of the likely impact of this type of government activity on inequality, as well as on employment and price stability.

MMT’s concern with inequality flows easily from its commitment to “economics for the public purpose.” The concerns most frequently associated with MMT in the past, full employment and price stability are two aspects of public purpose. But reducing economic inequality is also a clear aspect of public purpose in democratic nations, because increasing inequality is a constant source of threats to democracy itself, since the very rich use their wealth to undermine democracy in the political system.

There are other aspects of public purpose that can be targeted by fiscal policies, and that have received attention from MMT economists. These include the following problems:

Others may have a different list specifying public purpose, but assuming that this one, gleaned from the MMT literature, is not too far off the mark of important problems whose solution can be facilitated through Government spending and taxing, we’ll use it to get to the MMT idea of Real Fiscal Responsibility. There are a variety of reasons why we haven’t solved these problems and why they’ve accumulated and intensified during the past 40 years.

But one single rationale that often puts a stop to consideration of policies that might work is that “we can’t afford it” or “we’re running out of money” or “the Government is broke” or “the Federal Debt is too high” or “the United States Government is bankrupt”, and so, it would be fiscally irresponsible to implement this or that deficit spending to pursue a proposed policy. We certainly don’t want to get the money from other needed programs or from tax increases, such advocates continue, because people can’t stand tax increases.

Neoliberal views like these assume that Federal money is limited by what the Government can tax or borrow, and that using this limited resource responsibly requires deficit reduction, or balanced budgets, or paying back the debt. But this view of fiscal responsibility is based on a false premise, if you bother to read the US Constitution. That false belief is the common obstacle that blocks our efforts to solve all the problems we have listed.

There is, in fact, no constitutional limit on the amount of money our Federal Government can create and deficit spend if we expect that the impact of such spending will fulfill public purpose. And both the Federal Reserve and the Treasury can create (but not spend) money in unlimited quantities using authority delegated to them by Congress.

So, what we need to do to be fiscally responsible is not to restrict spending according to some arbitrary standard, like the debt-to-GDP ratio, or debt levels. These have nothing to do with US solvency. Rather, we must make sure that Government spending, using deficits or not, always fulfills public purpose, in the sense that it is a reasonable attempt to solve our problems in such a way as to produce the outcomes that most people think are representative of what they value for themselves, their neighbors, their communities, and their nation. That’s Real Fiscal Responsibility because it is also the way to solve our major problems. And right now, solving these problems defines the meaning of public purpose.

One can see from this that Real Fiscal Responsibility is much broader than the conventional wisdom that it is about deficit reduction and eventually balanced budgets. Indeed, they don’t count at all, in themselves. MMT needs to get this message out to people all over the world including the American people and the Eurozone nations. It needs to bring the idea of Real Fiscal Responsibility to everyone and banish the old, false, notion of fiscal responsibility and the austerity it rationalizes. If you want to help do that, then there is an effort going on here that you can help to do just that.

Please do it now, however, because the effort to get the idea of Real Fiscal Responsibility in opposition to the austerity-related fiscal responsibility meme needs to be done as soon as we can make it happen, before the austerians are successful in using their fiscal responsibility myth to cut Social Security and Medicare in some infernal “grand bargain.” Yes, there’s a good chance they’ll be trying that again after the election, and if the election results turn out as now predicted, then the chances rise even further that something will be done to hurt Social Security near the beginning of the next Congressional session, before the hoopla surrounding the 2016 elections begins to build.

How the Interactive Voter Choice System (IVCS) and the Re-inventing Democracy Project Will Accelerate the Diffusion of MMT, Help Reduce Inequality, and Enable Achieving the Other Aspects of Public Purpose

In my last post, I explained how the Interactive Voter Choice System (IVCS) will enable MMT advocates to communicate their views and persuade members of voting blocs and electoral coalitions that MMT-based policies make sense and are not negated by the need for deficit reduction or balancing budgets, in an environment with no advantage given to advocates of austerity whether based in neoliberal, or neoclassical, or any other economic approaches. MMT will have a level playing field at last, and its advocates will be part of an environment in which voting blocs will self-organize from the bottom-up.

There will be no limits on what aspects of public purpose MMT economists can target with fiscal policy in specifying Real Fiscal Responsibility, The concerns of MMT economists for economic equality and the relation of their concerns to the job guarantee proposal can be fully vetted with no systematic institutional bias to contend with. So, the MMT approach to full employment and equality will have a chance to spread much more quickly than it has in the corporate-based media environment MMT faces now.

It may seem strange that I say this last now, right after Pavlina Tcherneva’s welcome breakthrough in getting attention at the Times for her work. However, we’ve seen breakthroughs for MMT before at the major media outlets. They’re exciting for MMT advocates, and they are part of a gathering stream of change that will bring acceptance for MMT eventually.

But, I think that for right now, they are but minor tributaries into what may become a mighty stream some years from now. We still need to speed this up. There are still too many people who want full time jobs who find them unavailable. There are too many people who are desperately poor and cannot find the full time employment that would give them hope for better lives. And members of the 99% are still finding themselves getting more unequal compared to the 1% with each passing year, and are seeing their hopes evaporate in our smoke and mirrors economy. At this point, I’ll end with some words from my last post.

In the kind of political environment the IVCS will create, new ideas, solutions, and paradigms will be able to spread a lot faster than in the structured world of the mass media, dominated as it is by advertising money from the financial and business elites. MMT will finally have a fair chance to compete with other economic paradigms. That’s why I’m asking MMT proponents to support development of the IVCS by the Re-invent Democracy project and join with the international Re-invent Democracy community.

If you want to learn more about the project to bring this web platform for re-inventing democracy to fruition, and how it can restore the ability of democracies to change their leaders, then please go to reinventdemocracy.net, and reinventdemocracyfoundation.net for more information.

And one more thing, over the past four + years since discovering MMT and the Re-invent Democracy effort, I’ve worked hard for both, and for the anti-austerity notion of Real Fiscal Responsibility, spending my time thinking, blogging, and writing about these things, because in my mind they’re all connected. MMT provides us the conceptual tools to create a better future for the people in all nations; and the Re-invent Democracy effort with IVCS enables effective political action that can bring about that future.

So, I’m asking everyone to join me in both these efforts. They’re both necessary keys to a great future. But, we’ll never get there unless everyone supports efforts like these twin departures from what has gone before as much as they can.