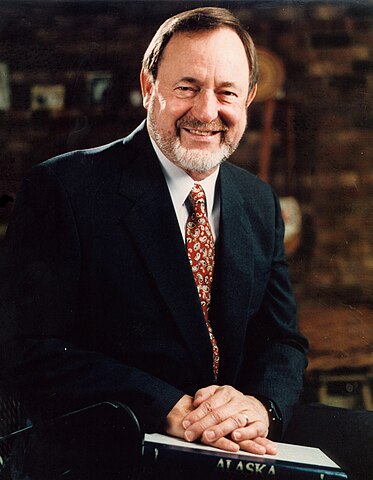 Don Young claimed he had never heard of “ocean assification”

So much money is being spent on radio and television political ads in Alaska, especially in the U.S. Senate race, that some TV programs are starting five minutes behind, so the stations can rake in as much dough as possible.  Both Sen. Mark Begich, and his GOP opponent, former Alaska Attorney General and Department of Natural Resources Commissioner Dan Sullivan, are right around the $10,000,000.00 mark.*  But PAC’s and SuperPAC’s are spending millions more on this important race. This spending level is entirely unprecedented in Alaska – for any race.

Sen. Begich was leading by as much as 10 or more points, up to the late August primary.  Since then, PAC and SuperPAC spending on behalf of Sullivan skyrocketed, and he has pulled slightly ahead in most polls.  RealClearPolitics.com is calling this race too close to call:

Begich started out 2014 as one of the most vulnerable Democratic incumbents. But he has run a smart campaign, while Republican nominee Dan Sullivan slogged through a tough primary and suffered some gaffes. Early polls show Begich up, but Alaska polling is notoriously inaccurate. We likely won’t have a good indication who will win this race until the morning after Election Day.

Wednesday night Begich and Sullivan faced off in the fishing community of Kodiak in a combination question-and-answer session from fisheries journalists, and debate.  In the only other important debate so far, in Anchorage last month, Sullivan was clearly bested by Begich.  In the Kodiak event, Sullivan seemed to be better prepared, but he was facing a hostile audience on issues he clearly knows little about, and doesn’t seem to care much about either:

In the two candidates’ first joint public appearance in more than a month, Sullivan, a former state attorney general and natural resources commissioner, faced probing questions from Begich and a panel of fisheries journalists on his position on the controversial Pebble mine project in Southwest Alaska, as well as on the potential for oil and gas extraction from the same area, which one panelist referred to as the nation’s “fish basket.”

Sullivan had initially said he’d miss the debate but changed his mind and appeared before the crowd of 150 in a high school auditorium after spending two days in Kodiak — one on the stump with Republican U.S. Sen. Lisa Murkowski — focused on the fishing industry.

It’s an area where Sullivan has admitted lacking professional knowledge, setting up a tough showdown with Begich, who arrived Wednesday evening with a gold salmon pin on his blazer. Begich has chaired a key fisheries committee in the U.S. Senate for the last three years, and owns a long voting record that leaves fewer unknowns.

That made for a tough audience for Sullivan, too, in a port city of about 6,500 people that produced an estimated $400 million in seafood in 2011, which ranks it among the top commercial fishing ports nationwide.

In the past, Sullivan has made statements in favor of developing the gigantic Pebble Mine at the headwaters of the world’s richest salmon habitat.  He tried to come off as neutral on the project Wednesday.  The audience seemed skeptical. When it came to skepticism, Sullivan once again identified himself as a climate change skeptic: