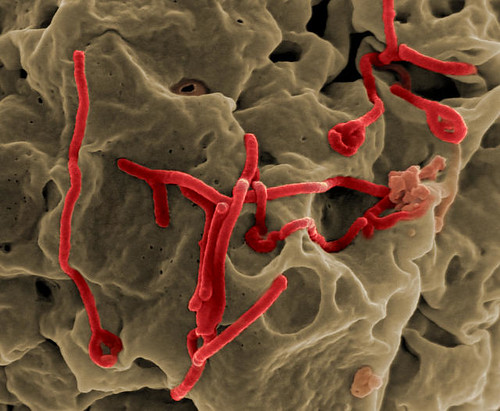 There have been here a number of posts on this nasty little virus, mostly to do with the death toll and how it’s being fought, or not.  Even the guy in Texas who was sent home from the hospital ER.

Here are the nitty gritty facts about the virus as we have learned so far. From MSDSonline.

PATHOGENICITY/TOXICITY: The Ebola virions enter the host cells through endocytosis and replication occurs in the cytoplasm. Upon infection, the virus targets the host blood coagulative and immune defence system and leads to severe immunosuppression (6, 10). Early signs of infection are non-specific and flu-like, and may include sudden onset of fever, asthenia, diarrhea, headache, myalgia, arthralgia, vomiting, and abdominal pains (11).

In other words, you do not know when you have it initially and unless you get to a hospital to get diagnosed – usually by a blood sample – it could be days before you are isolated. In the meantime you are puking and spitting and crapping virus all over. Like the guy in Texas.

INFECTIOUS DOSE: 1 – 10 aerosolized organisms are sufficient to cause infection in humans (21).

Damn few viruses can get you sick as shit.

Which means you could have it and not know it for up to a week, even longer before you get to a hospital, giving you plenty of time to spread it around.

COMMUNICABILITY: Communicable as long as blood, secretions, organs, or semen contain the virus. Ebola virus has been isolated from semen 61 days after the onset of illness, and transmission through semen has occurred 7 weeks after clinical recovery (1, 2).

Which means anything and everything to spit, puke, shit, piss, or pass any other way will contain the virus. Conceivably for quite a while in some cases. This is why those treating the people in Africa are wearing hazmat suits. Some guy or gal gets it from somebody, doesn’t know they have it, gets sick and begins coughing up crud, spitting and puking and has diarrhea from hell that comes on at some inconvenient time, thereby spreading it all over and not knowing it.

That is why there are people freaking out.

Now the good part is that like all viruses, it can be killed by detergent and chlorine cleansers so clean, clean, clean anywhere it’s suspected. Also, like other viruses it can be killed by electromagnetic radiation such as light so the virus is more vulnerable than bacteria which can exist outside a host for a very, very long time.

The really bad part, though, is that it thrives on poverty because poor people are the least likely to seek medical attention once they fall ill and will be more likely to spread it.

Just wanting to make sure everyone is completely clear on this.