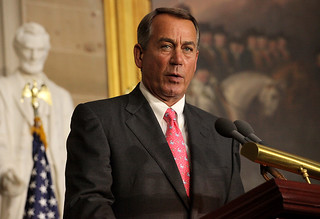 Speaker John Boehner, no war vote until the war is well underway.

We didn’t get a Congress vote authorizing a new war in Syria before it started and now we might not actually get one until long after we started fighting. Speaker John Boehner (R) told the New York Times he doesn’t want to debate the issue during the lame duck. From the NYT:

“I have made it clear that I think the House and the Congress itself should speak,” the speaker said in an exclusive, wide-ranging interview with First Draft.

But Mr. Boehner believes a post-election, lame-duck session is the wrong time for such a weighty decision.

“Doing this with a whole group of members who are on their way out the door, I don’t think that is the right way to handle this,” he said.

Mr. Boehner, who is open to a more expansive military campaign to destroy the Islamic State, thinks lawmakers should take up the issue after the new Congress convenes in January.

Even if Congress starts debate on the issue right after they are sworn in, we likely won’t see any vote until mid-January, at the earliest. Obviously getting around to following the Constitution with regards to our newest war isn’t a priority for Speaker Boehner, so there is a good chance other issues will be dealt with first and the vote on Syria could be pushed back into February.

We are talking about being engaged in a war for at least FOUR MONTHS, if not more, before Congress might get around to authorizing it!

I previously joked that plans to vote to approve a war after it was started is like putting a condom on right after you have sex and pretending that is protecting anything, but this plan for Boehner is like putting the condom on a week later.