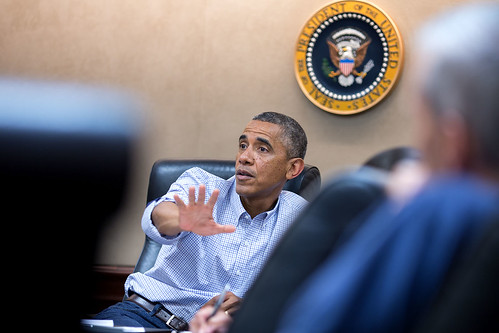 This isn’t a war, honest!

One of the bothersome aspects of the war escalation in Iraq and Syria has been the commitment of President Barack Obama’s administration to using language to conceal their war plans.

The White House has insisted this is not a war. The attacks on the Islamic State in Iraq and Syria (ISIS) are a part of a “counterterrorism strategy.” The US has not launched a war because it has previously been dropping Hellfire missiles on suspected terrorists in various countries. Those strikes, though they have killed hundreds of civilians and were questionable in their legality and success in bringing about “security,” were part of a “strategy.”

“[ISIS] is waging a war against the broader international community. And the president is determined to build and lead an international coalition to take the fight to them. So in the same way that the United States is at war with al Qaeda and its affiliates around the globe, the United States is at war with [ISIS],” White House Press Secretary Joshua Earnest told reporters in a briefing on September 12.

The administration also will not use the word “war” because, unlike the Iraq invasion in 2003, there is more international support for this US-led military action. Apparently, “war” is only appropriate when the US drops into a country all Rambo-like and does not care about the consequences.

Trevor Timm, columnist for The Guardian, wrote a piece on the recalibration of language by the Obama administration that contained a few more examples.

The US bombed the “Khorasan Group” on September 23. The administration claimed this group posed an “imminent” threat to the US. Yet, as Timm noted, the Justice Department has its own definition of “imminent.”

That means the “group” did not have to have a plot to immediately attack the US. They just had to be capable of plotting against the US in the same way defenders of the Iraq War have said Saddam Hussein was capable of developing weapons of mass destruction to justify the invasion and occupation.

Additionally, the “Khorasan Group” does not exist. Imran Khan, a correspondent for Al Jazeera English based in Doha, contacted people to see if they had ever heard of this group. Nobody he spoke to from the Middle East or South Asia had heard of it. Even a blogger and activist who “openly supports” ISIS and has fought in Afghanistan had not heard the name.

…On the phone I spoke to Robert Ford, the former US Ambassador ?to Syria who told me: “We used the term inside the government, we don’t know where it came from. It certainly didn’t originate inside the State Department. All I know is that they don’t call themselves that.”

Khorasan is almost certainly a term that the US government has coined. It’s suitably exotic. Geographically, it’s a historical region in the north east of Iran and includes Afghanistan and what is now Pakistan. This tallies with what I’ve been ?told by my sources, and who the Americans claim, make up the group: a hardcore of former al-Qeada fighters who come from Pakistan, Afghanistan and Iran…

It is a name that, if repeated often enough, can help whip up support for war. “It pushes the idea that there are groups out there that operate in a shadowy manner and use ancient names to hark back to an ancient time,” as Khan put it.

There is also the idea that the troops being deployed to Iraq are not combat troops but advisers. Like wedding planners are not necessarily a part of a wedding, these war planners are supposedly not part of combat.

However, Clay Hanna, who served in the US Army from 2003 to 2008—and was “once a pair of ‘boots on the ground’ in Iraq, called Obama out for stating “American forces do not and will not have a combat mission.”

…It’s just not true. The only question is whether the American people will not be deceived for the umpteenth time as to what we are really doing. Like John F. Kennedy’s “advisers” in Vietnam, like the U.S. military secretly training Manuel Noriega (only to arrest him on drug charges later on), or the Reagan administration giving weapons to Saddam Hussein to fight the Iranians, or the CIA funding mujahedeen in the 1980s who were later to become al Qaeda, or the Bush administration using the threat of weapons of mass destruction as a pretext for invasion, this strategy to send in “advisers” to fight the Islamic State is subterfuge, and reflects conflicted leadership.

How can we stand up and call out Vladimir Putin for his deception in the Ukraine—for covertly using Russian soldiers and pretending they’re Ukrainian “separatists”—and at the same time say with a straight face that our “advisers” will not have a combat mission?…

Much of the language being created and employed by the Obama administration to appropriately brand this war is coming from the Pentagon. The White House has been making statements identical to military leaders. Rear Admiral John Kirby said, “This is not the Iraq war of 2002, but make no mistake, we know we are at war with [ISIS] in the same way we are at war and continue to be at war with al Qaeda and its affiliates.”

Recall, on July 23, 2003, then-Secretary of Defense Donald Rumsfeld sent a memo to General John Abizaid, who was the commander of US Central Command. Rumsfeld attached the definitions of “guerrilla warfare,” “insurgency,” and “unconventional warfare.” The definitions “came from the Pentagon dictionary.”

In the chilling documentary directed by Errol Morris, The Unknown Known, Rumsfeld explains, “It seemed to me that there are ways you can talk about what the enemy’s doing that help the enemy unintentionally and ways you can talk about what the enemy is doing that harm the enemy, that make its task less legitimate, more difficult.” He searched for the best words to that would benefit the US. And, as he told the press on July 24, they came from the Pentagon’s dictionary. He did not look at a “regular dictionary.”

Similarly, the Obama administration is using Pentagon speak when talking about this war. It appears to be aimed at ISIS because the administration does not want to give ISIS the war against the West, the “infidels,” that ISIS fighters desire. They think using different words will make it easier to undercut ISIS. But the words won’t matter as much as the images of bombs exploding and whatever force is used against ISIS will be bigger propaganda for ISIS than any words the Obama administration develop for the media.

However, the invention of language will propagandize Americans. It will play some role in undercutting any antiwar opposition but could develop some level of legitimacy. It will serve the administration’s preferred media narrative that Obama is a reluctant warrior, a brilliant pragmatic and thoughtful tactician who did not want this w?a?r? counterterrorism strategy but stepped up when the world needed American leadership and inspired hope instead of fear.

Comedian George Carlin was highly critical of euphemisms, like the ones the Obama administration has used. From his 1990 album, “Parental Advisory”:

…Smug, greedy, well-fed white people have invented a language to conceal their sins. It’s as simple as that. The CIA doesn’t kill anybody anymore, they neutralize people…or they depopulate the area. The government doesn’t lie, it engages in disinformation. The Pentagon actually measures nuclear radiation in something they call sunshine units. Israeli murderers are called commandos. Arab commandos are called terrorists. Contra killers are called freedom fighters…

He said, “Americans have a lot of trouble dealing with reality. Americans have trouble facing the truth so they invent kind of a soft language to protect themselves from it, and it gets worse with every generation.”

If the world is concerned about Iraq, Syria and the wider Middle East becoming an even greater quagmire—or, as the Obama administration might put it, “risky affair,” it will not allow language to conceal what is actually happening and delude us all into believing this is the singular and proper course of action that may even go according to plan.

Photo from the White House and in the public domain.